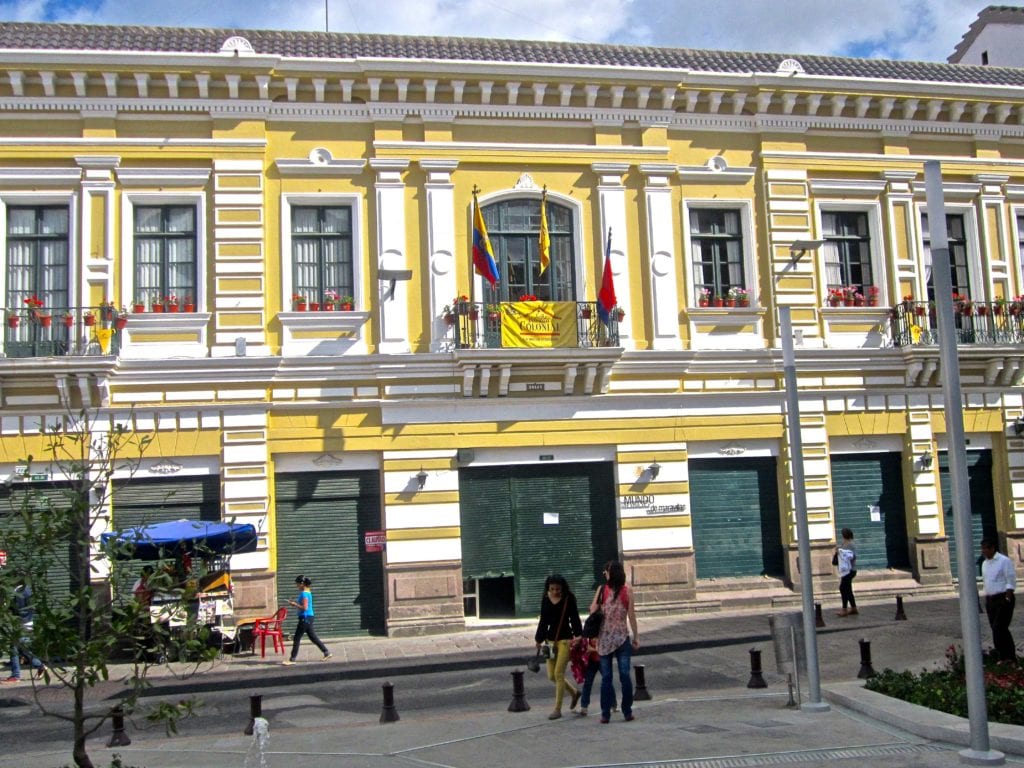 I am staying in a Posada on a narrow cobblestone street, a five minute walk from the Independence Plaza, also known as the Grand Plaza, in Quito, the Capital City of Ecuador. 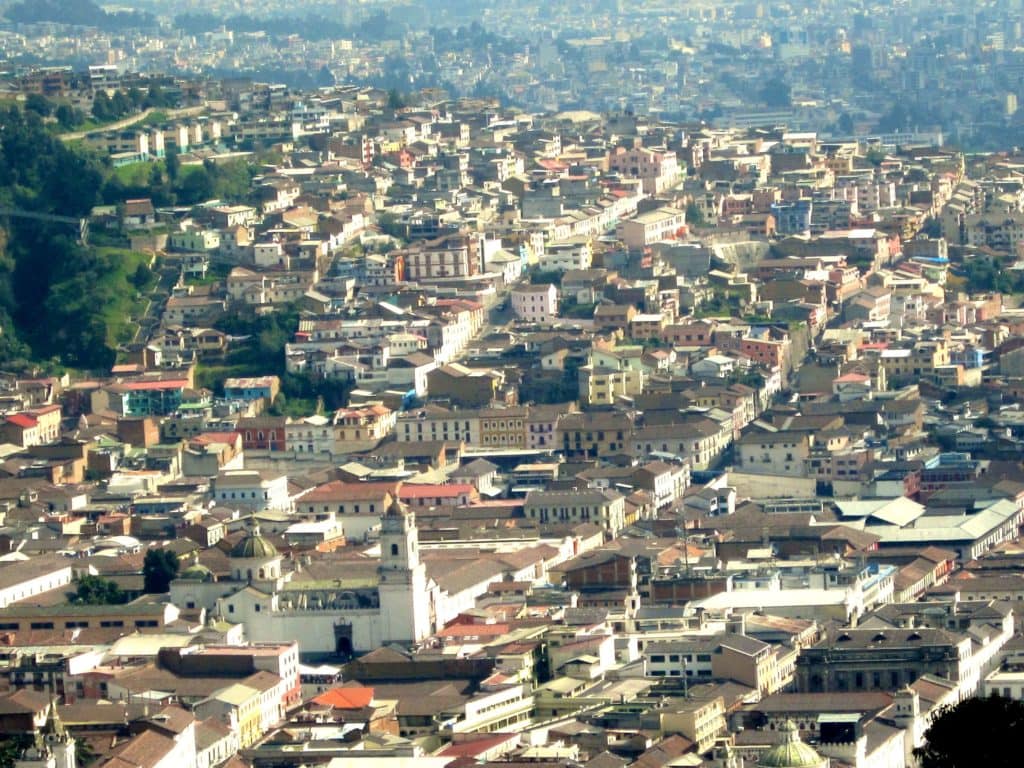 This is the old Centro Historico  (Historic Center) founded in 1534.  It is a UNESCO Heritage Site,  with many ornate Churches, several historic monuments,  amazing Colonial era homes built around  picturesque plazas connected by cobblestone streets and pedestrian alleys.  in 1978  it  was the first Unesco Heritage site ever designated in the world and since that time there has been much restoration.  Located in a lush green valley with a backdrop of the Pichincha Volcano and the Andes mountains, it has all the ingredients required of a UNESCO Heritage site. 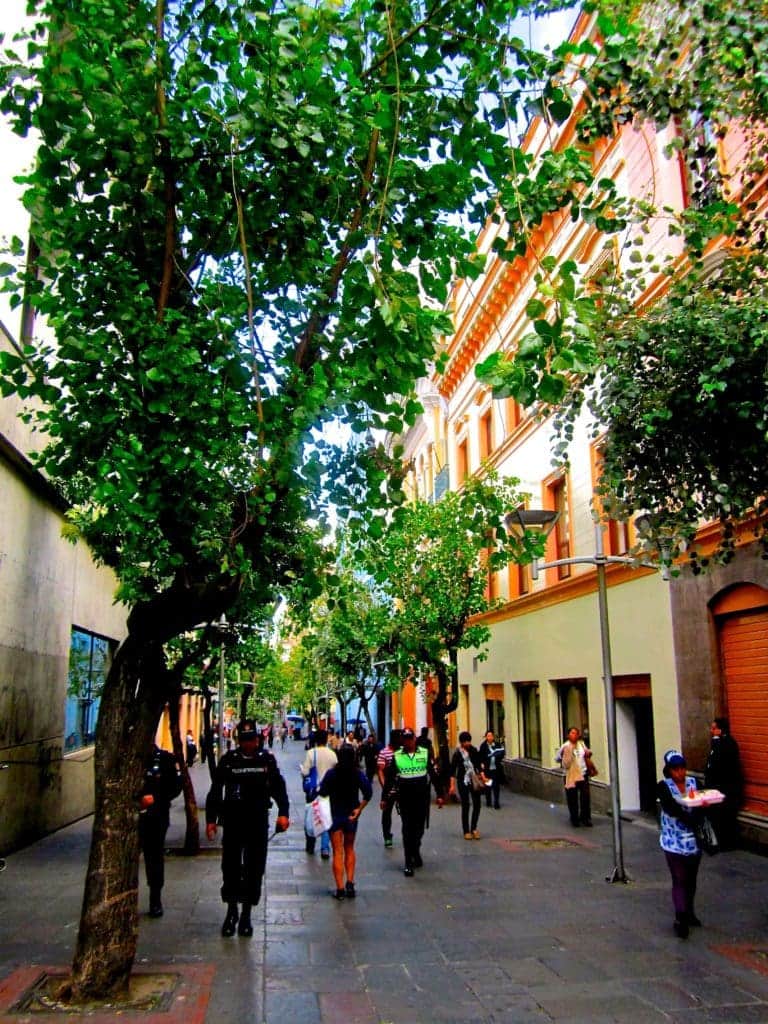 The buildings are in a good state of repair and are painted muted colors, soft ochres, lavender blues,  acid greens, dusty pinks with the architectural details highlighted in white.   With its uneven roof line of consistent orange clay tiles,  this scene is as perfect as it can be.   Quito is surrounded by the Andes Mountains with a backdrop of the Pichincha Volcano which unexpectedly began puffing and spewing ash in 1990. After making itself heard and felt by depositing a thick layer of ash on the City, it quieted down and has remained dormant ever since.  Pichincha is only ten kilometers from the City Center and one may question why people live in such close proximity to a volcano that can become active again – probably the same reason Californians live on the San Andreas Fault !! 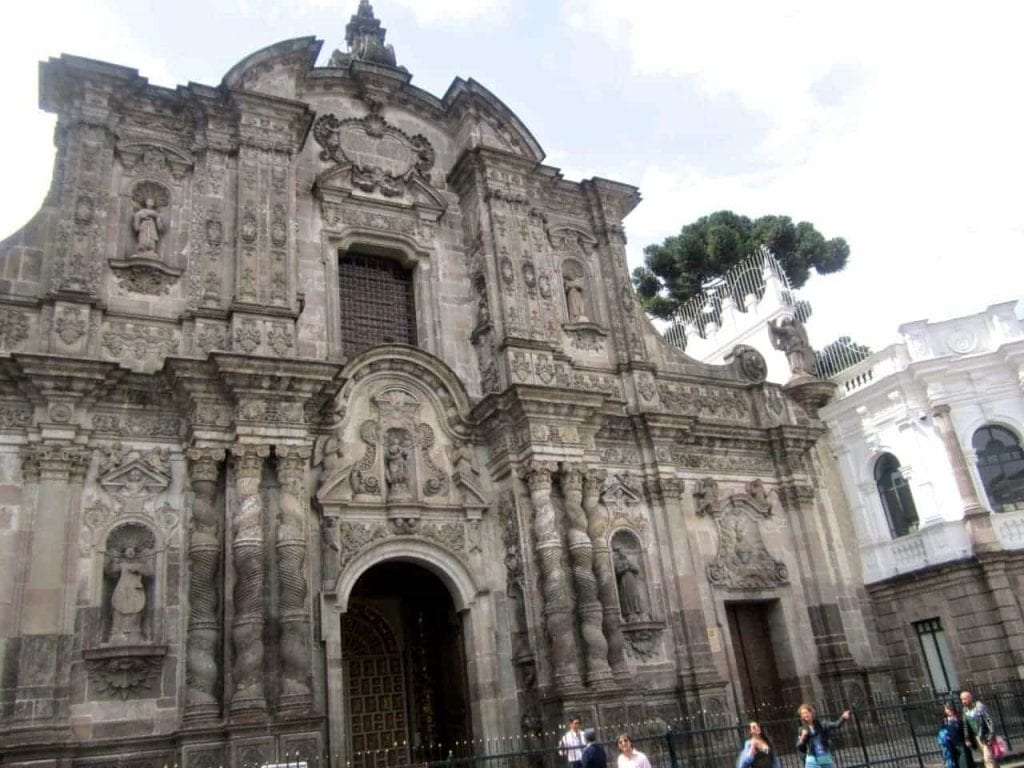 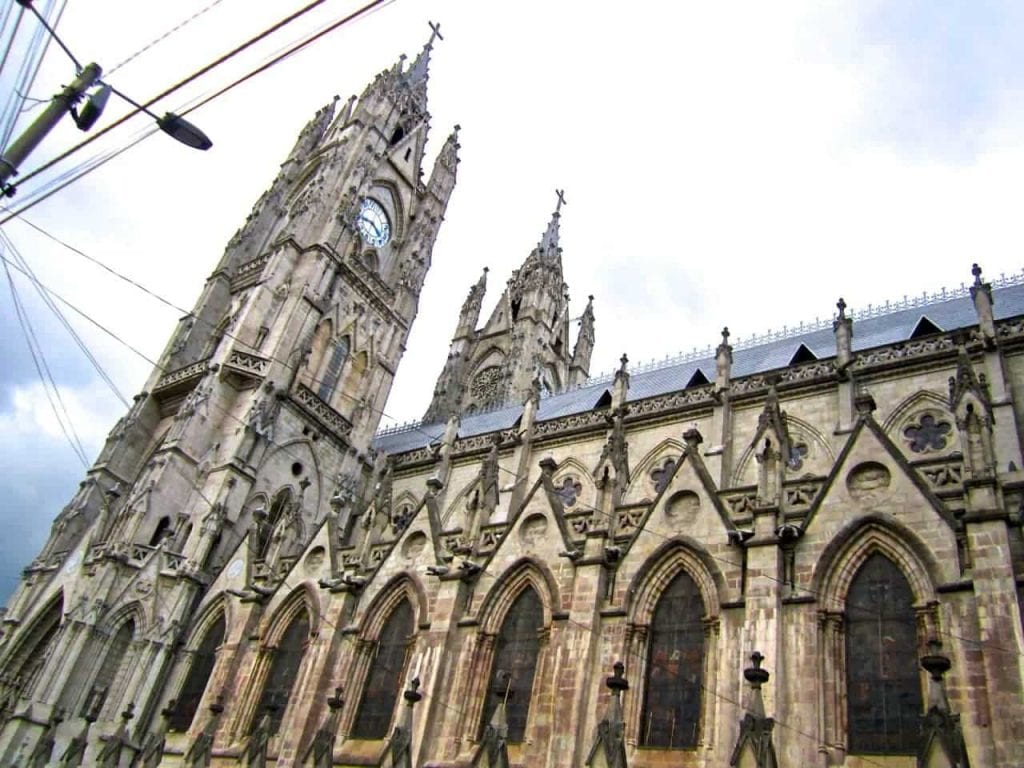 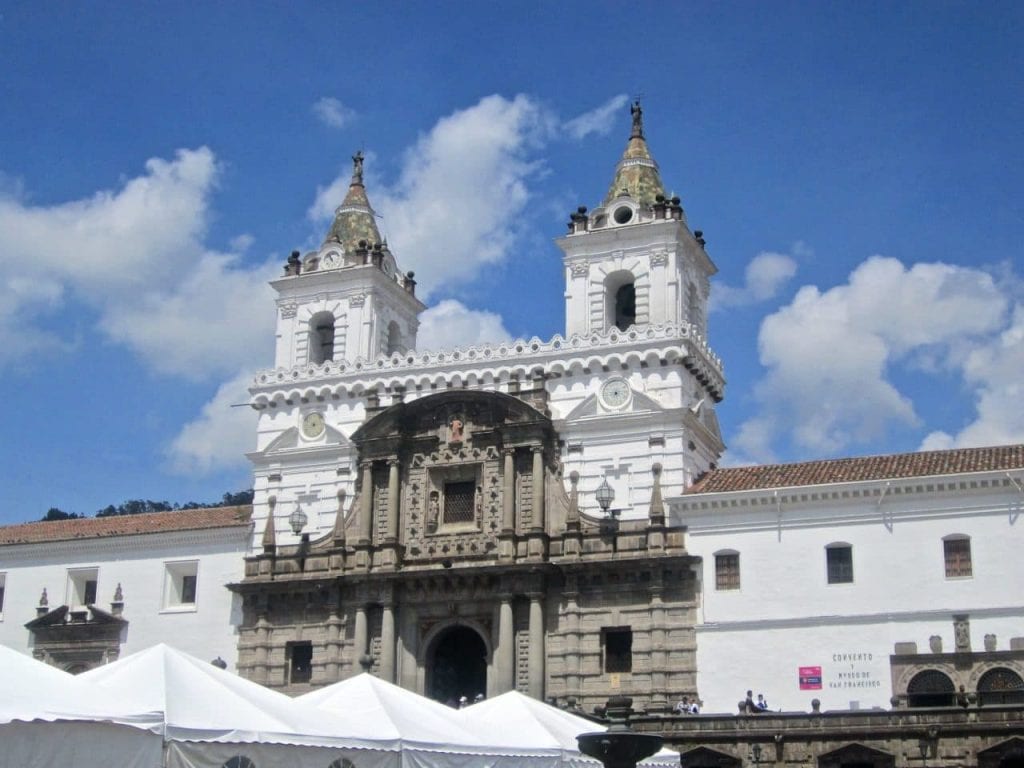 Quito was founded in the Sixteenth Century and there are several religious buildings that have survived to this day, among them the Monasteries of San Francisco and Santa Domingo and the Church and Jesuit College of La Compania.  In 1978 the Historic Center of Quito was declared a UNESCO World Heritage Site “because it had the best preserved,  least altered historic center in Latin America.”   This accolade was for “outstanding universal recognition,” and with it came funding to be spent on the historic area, that has since brought it fame and revved up its tourist business. 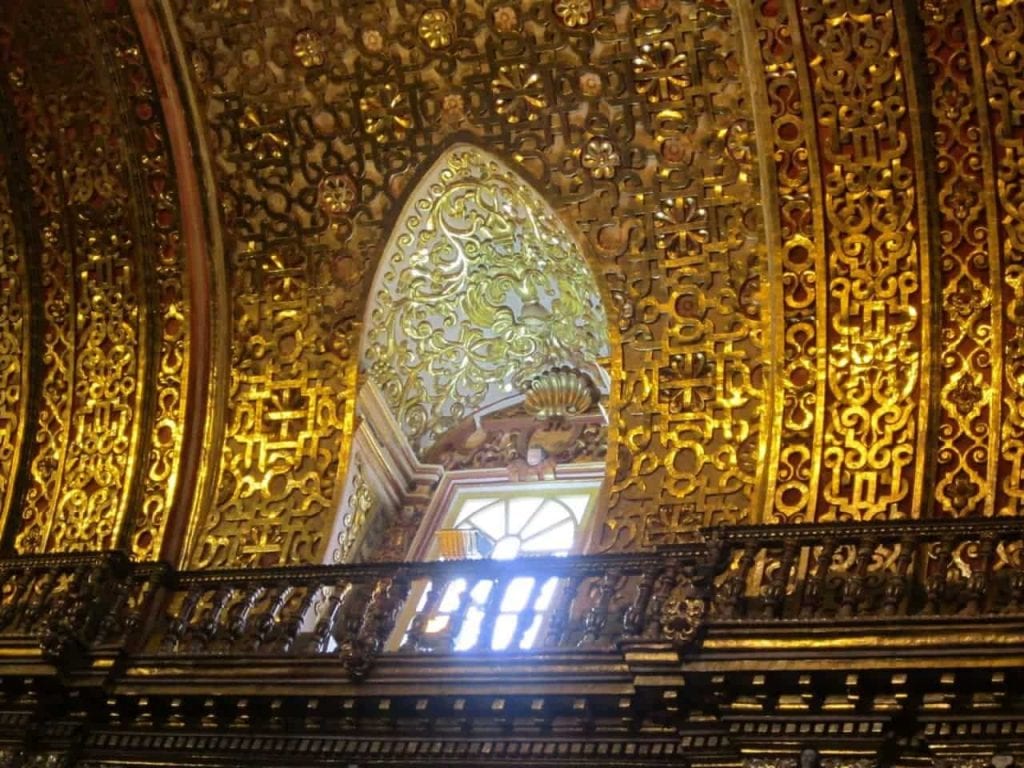 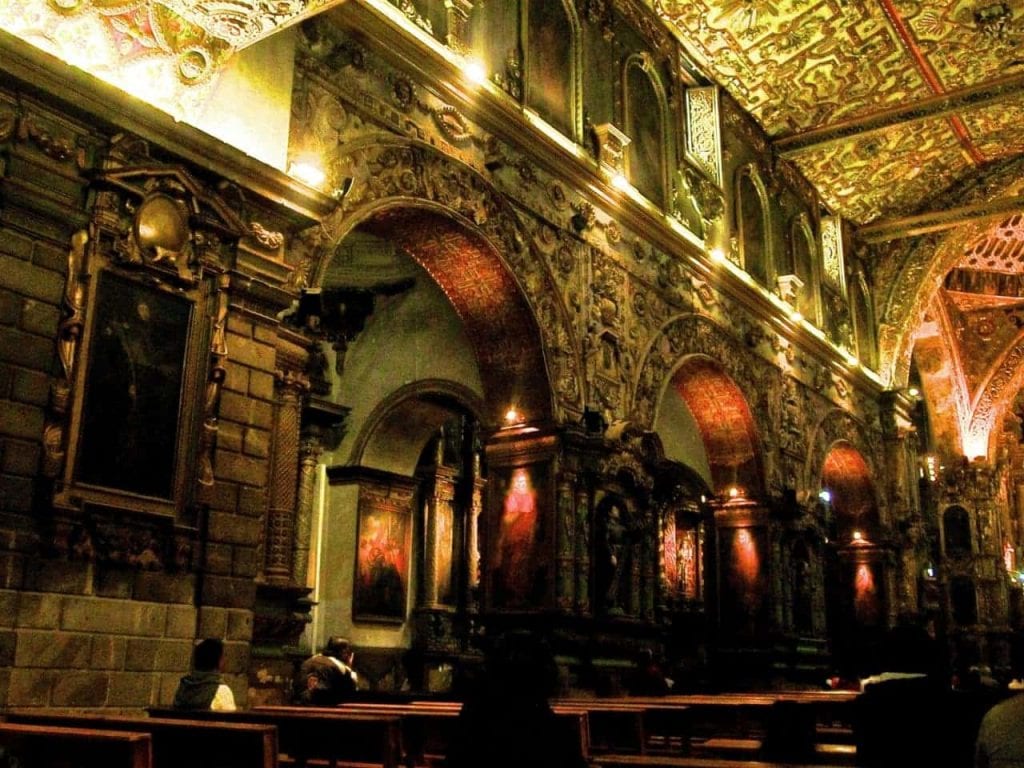 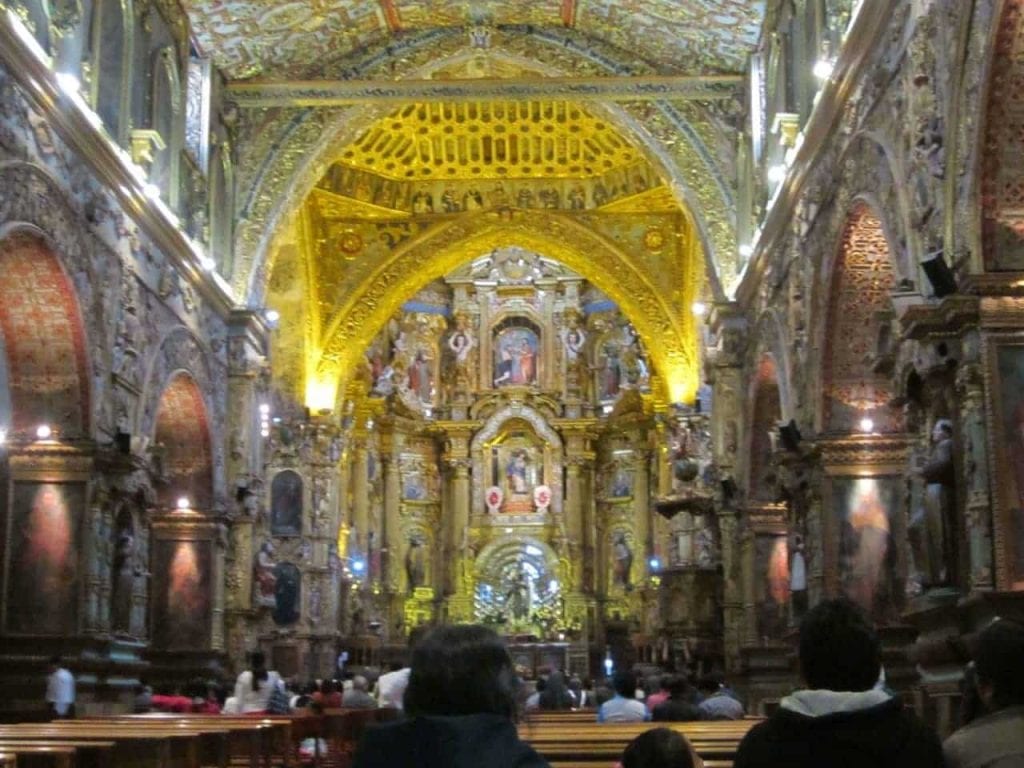 The Spanish Conquerors arrived in Quito in the mid Sixteenth Century in search of new frontiers and a lust for gold to be sent back to Spain.   They set about building Churches and Monasteries and converting the population to Catholicism – the country is today ninety five percent Catholic but all religions are respected.  The Conquerors found a ready supply of indigenous talented artisans who they trained further in the European style of the time.   The ornately embellished Churches are a legacy of what is called “The Baroque School of Quito”, a fusion of Spanish, Italian, Moorish, Flemish and indigenous styles.  All told there are forty Colonial Churches and Chapels and sixteen Convents and Monasteries in this historic area, mostly dating from the Sixteenth and Seventeenth Centuries. The Churches are extremely ornate with lots of gilding and the workmanship is extraordinary, comparable to anything found in Europe of a similar period. . 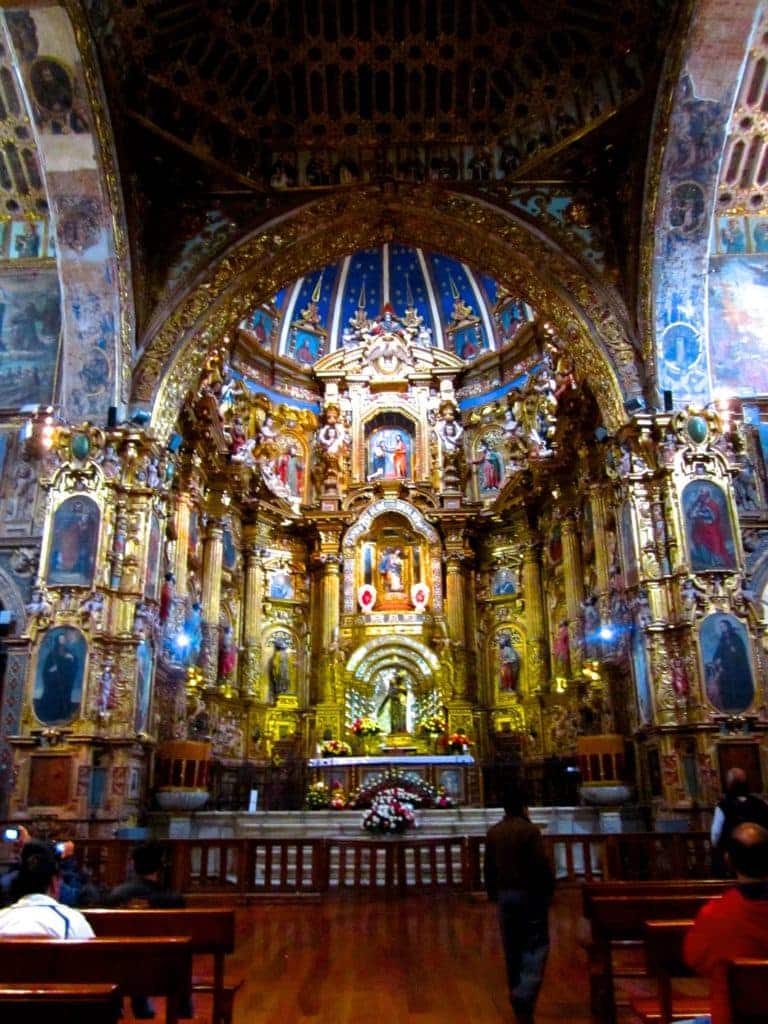 There is a beautiful atmosphere inside these holy places.  People are going in and out during the day, lighting candles, saying their prayers or attending Confession.   The Sunday Services are packed.  They  begin and end on the hour every hour, with a different choir and musicians taking over  with each change.  Especially outstanding are the voices of the soloists in the choir.    Two that I attended today reminded me of Evangelical Services, the music with a beat and hands clapping to the rhythm of the musicians.   Churches are a magnet for the tourists and groups are passing through all the time, not only admiring the architecture and attending Service, but also supporting the restaurants, the shops and very importantly, the many street vendors who are dependent for their livelihood on the tourist trade. 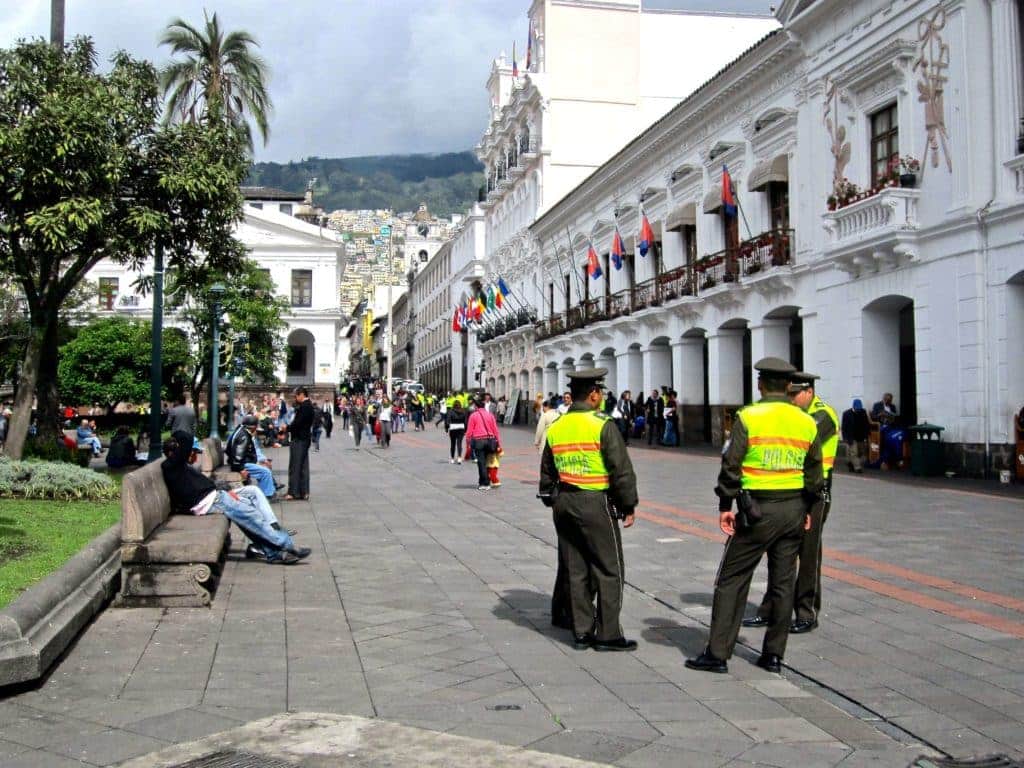 Modern Quito has a population of two and half million people and is situated 9,400 feet above Sea Level.  Due to the high altitude, one is advised not to overdo walking too much for a couple of days after arriving to allow one’s body time to acclimate.  The streets of the  Old Town where I am staying, surrounded by all this history and beauty are uneven and undulating.   There is a heavy police presence, with most of the Police in the Old Town wearing a badge that describes them as “Tourist Police”.  The Historic Center had been very run down and dangerous, harboring unsavory people, but after becoming a U.N.E.S.C.O.  World Heritage Site, with a plan in place, it was cleaned up and is now “supposed” to be safe – although one is constantly reminded to look out for pick pockets preying on the unsuspecting tourists.  These Police are fully armed and carry guns.   Unlike the majority of the population, most of them , both men and women, are taller and look extremely handsome dressed in their uniforms and the women police are attractively made up and groomed.   I was told, believe it or not, this Police contingent have been screened  and selected for their looks. There is another group of police wearing different uniforms, carrying shields and batons, more like riot police who I have seen gathering in groups during the political rallies.  With so many police, this must be a good source of employment.  As a tourist, it is re-assuring to move around in the presence of these “protectors”. 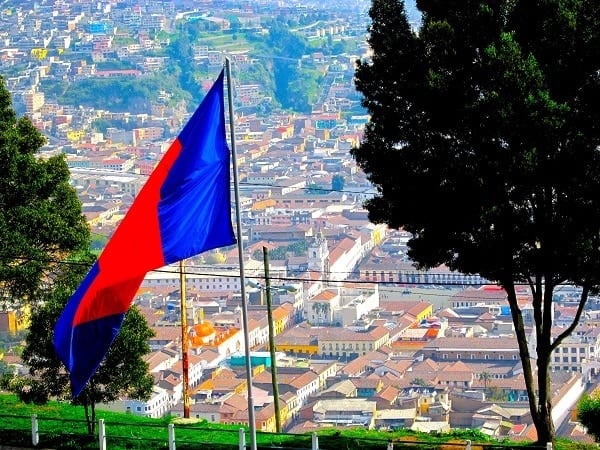 The geographic location of Quito is interesting:  it is within one kilometer of zero latitude and is fifteen miles south of the Equator. The climate is described as “Eternal Spring” because the temperature hovers around  55 and 75 degrees Fahrenheit throughout the year.   Since I arrived,  it has hovered  in the fifties to sixties and I call it “Eternally Chilly” not being used to this cool temperature. 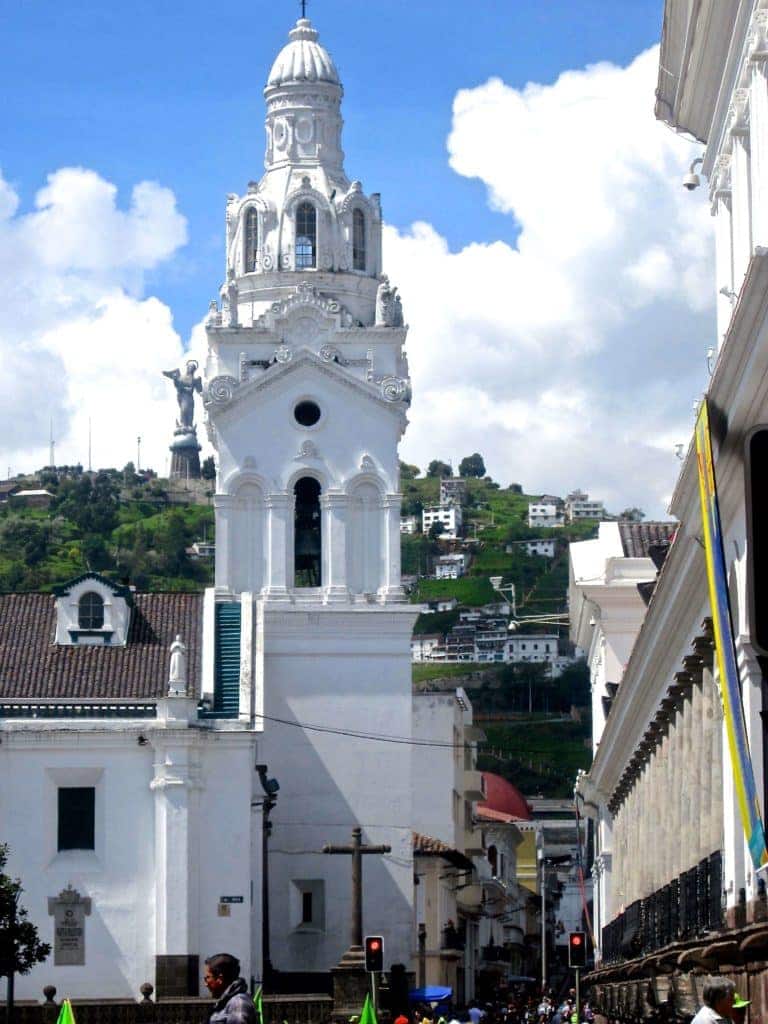 The social hub of the area is the Plaza de la Independencia, also referred to as the Plaza Grande. I am staying on Calle Garcia Morena, one of the main “commuter” streets of the Historic Center. It has narrow sidewalks, the street paved with cobblestones and is wide enough for one small car or a horse and carriage, although the odd tourist bus sometimes squeezes its way through the pedestrian traffic. 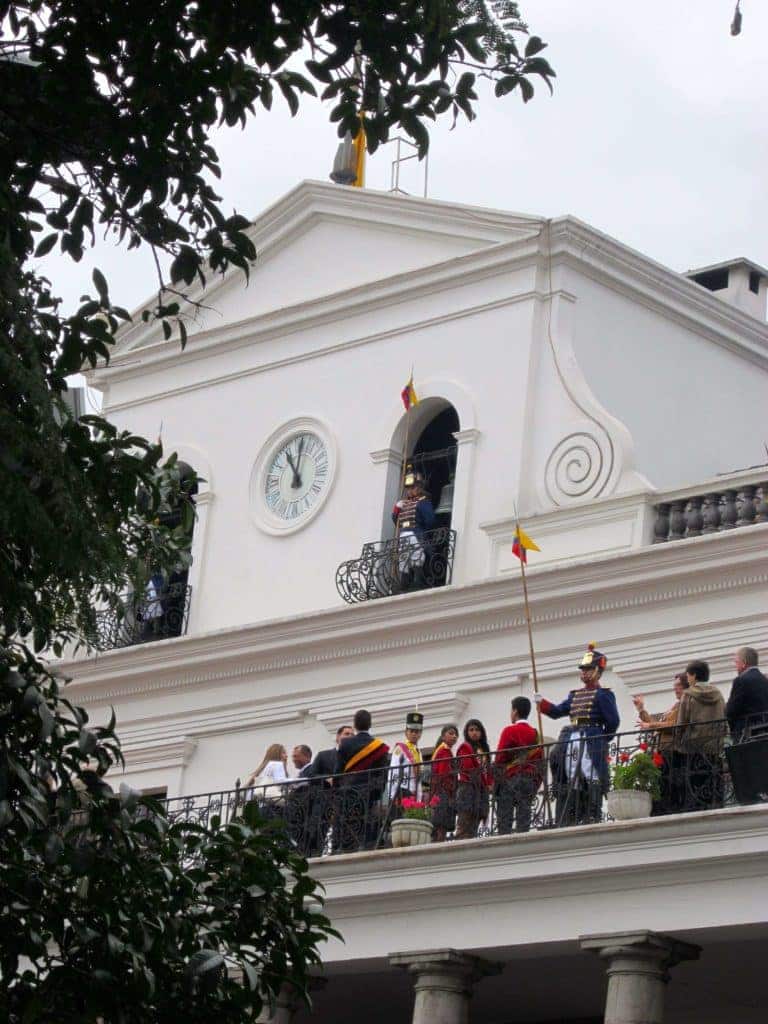 The President’s Palace,  known as the Carondelet Palace,(the seat of Government for the Republic of Ecuador)  is on the Independence Plaza  and once a week the President comes onto his balcony to “talk” to the populace and the streets and Plaza become packed and congested.  He really does communicate with people in the audience and I saw petitions being presented.

This is worth seeing for the pomp and ceremony and includes a horse parade of immaculately groomed riders and horses and a Marching Band.  They are known as the Guards of Tarqui as the design of their uniform dates from a Battle of the same name fought nearly two hundred years ago. 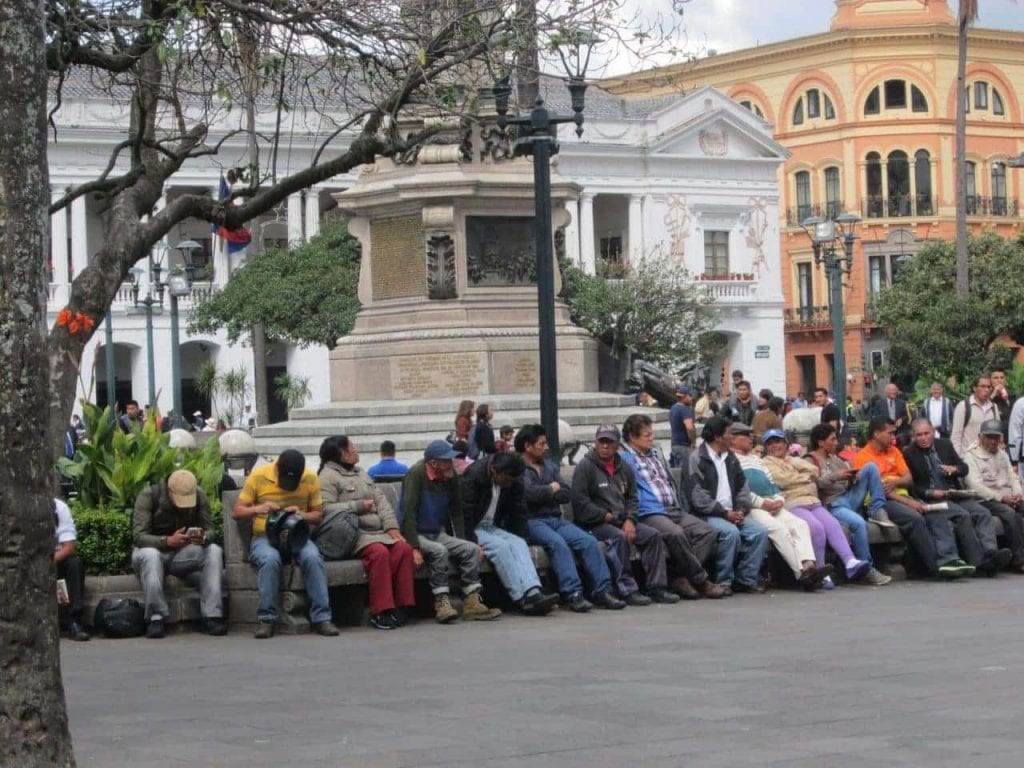 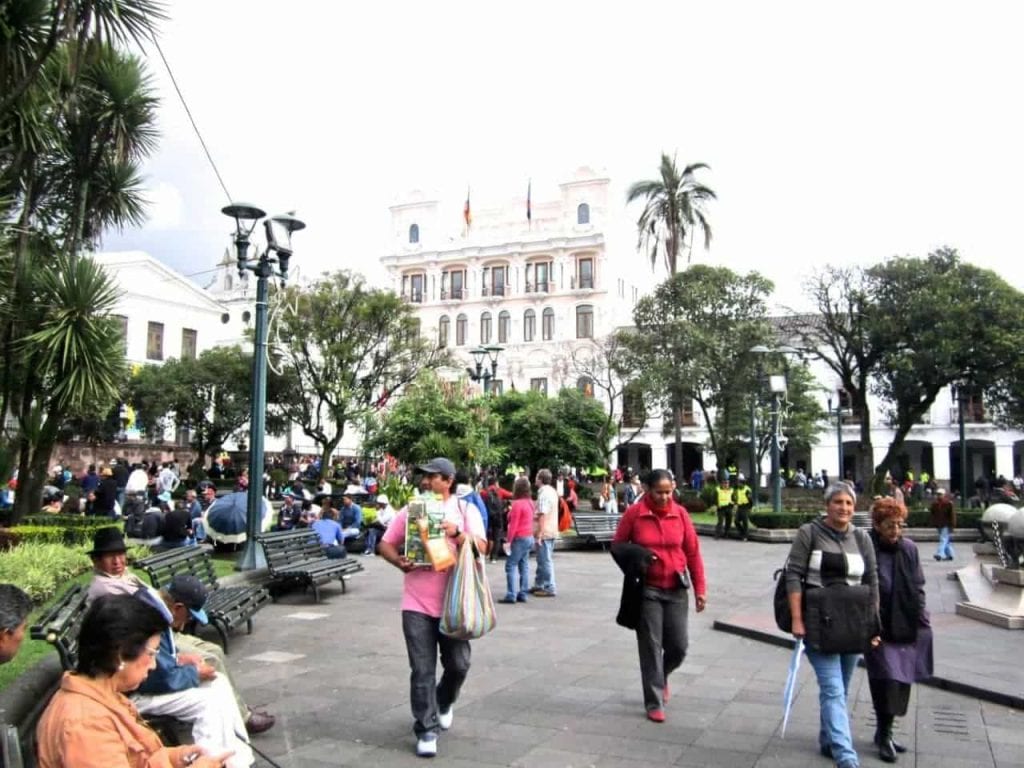 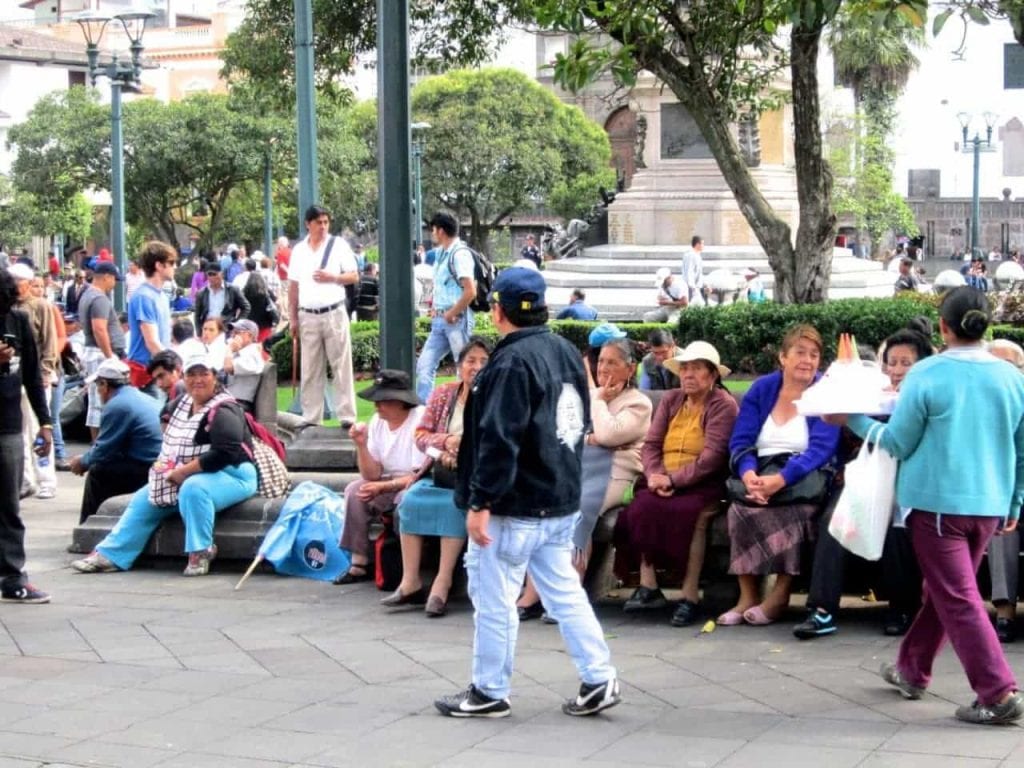 No matter what time of  day I arrive at the Grand Plaza, there are always throngs of people.  The layout is formal with islands of trees and flowers and lots of stone benches everywhere to spend the time of day and the seating is always occupied.   There are little shops all around built into the  ancient stone walls selling food or handmade clothing.  These are operated by local people, some wearing the colorful traditional Otovaleno clothing with bowler hats which is part of the outfit.  If there is a political rally,  of which there are many, there can be three thousand people on the square gathered around the speaker or splintering into smaller groups, arguing the pros and the cons.  Elections are coming up soon so there are a lot of political rallies on the Plaza. 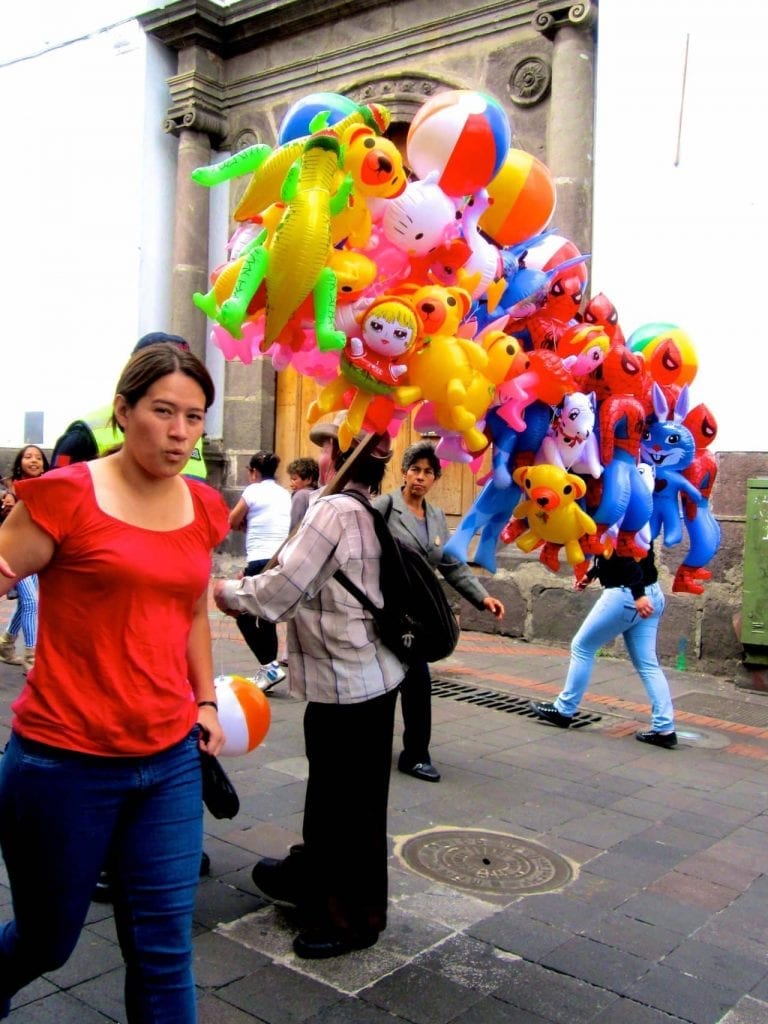 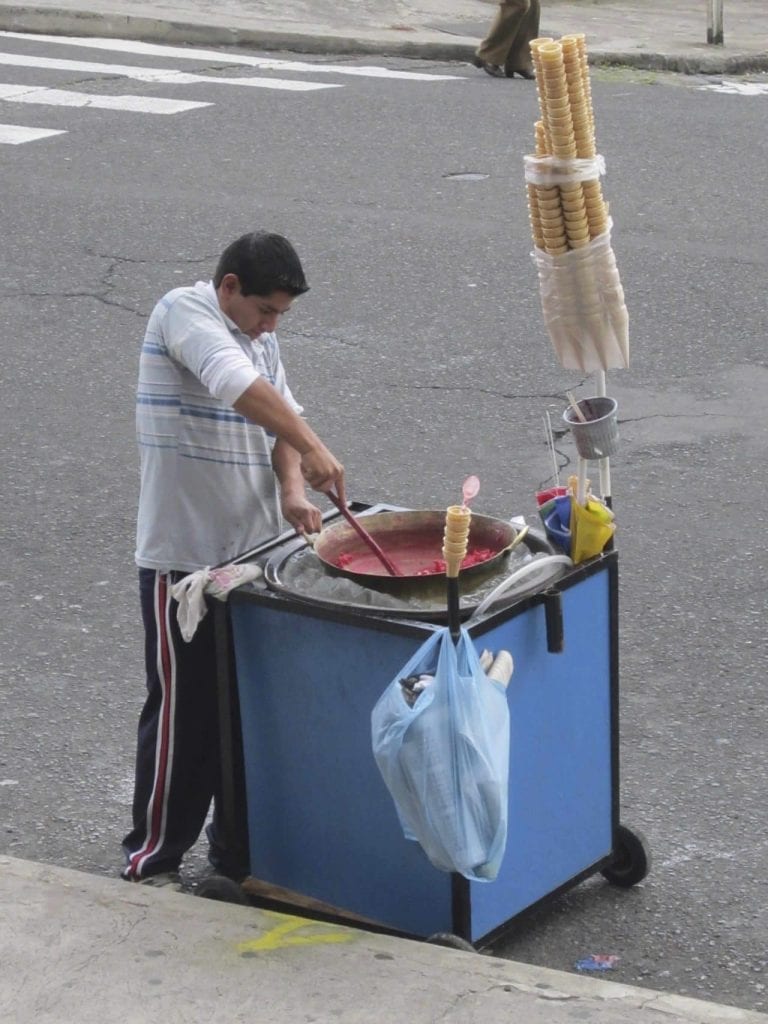 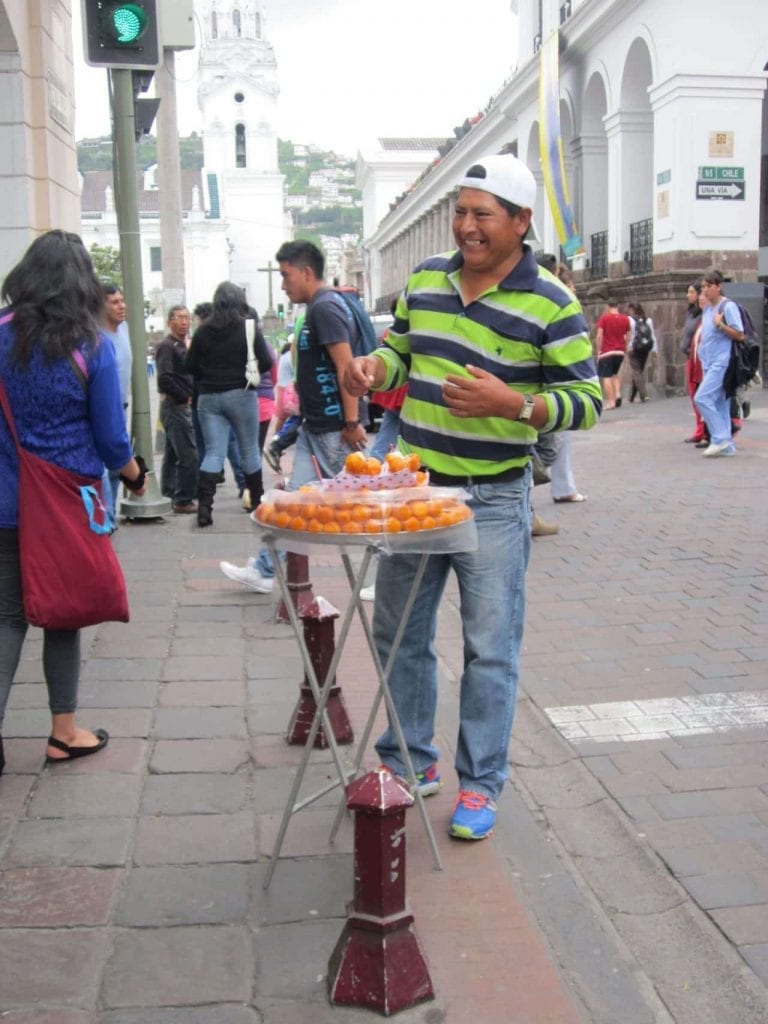 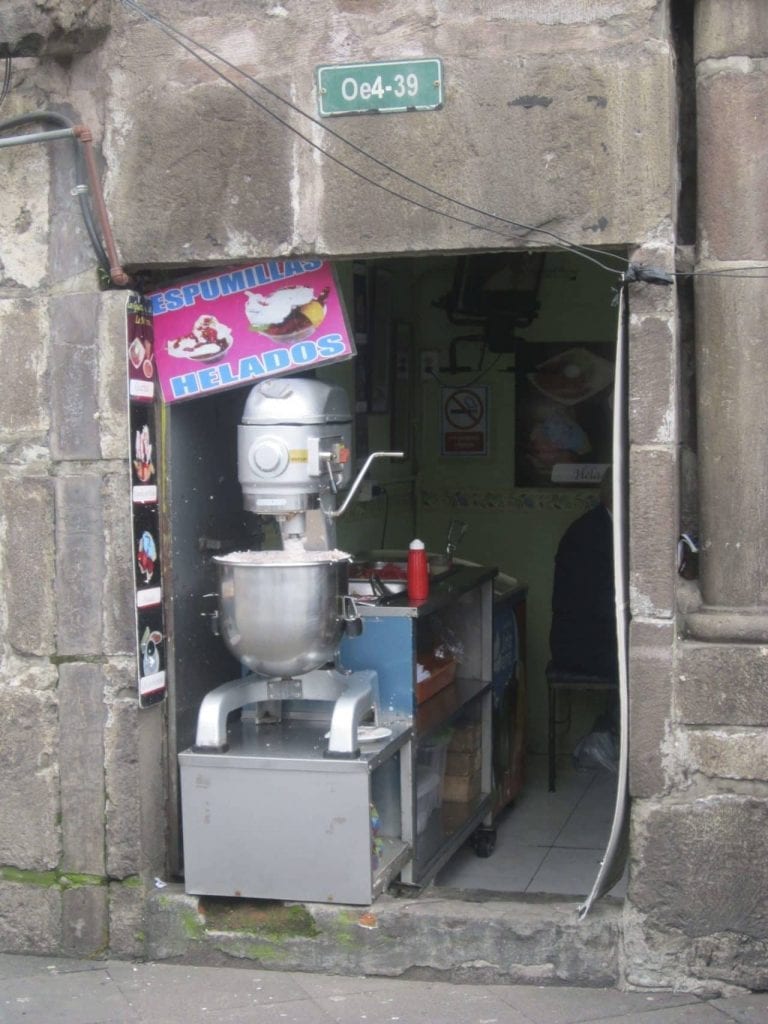 Everything, and I mean “everything” is sold  by the street vendors on the Grand Plaza and the surrounding streets, such as:
fresh fruit, delicious tropical fruit salad in plastic cups ( I have eaten it and it is delicious and did not kill me !!), fresh fruit juices , ice cream, tea,  candies,cookies, pastries, lottery tickets,  candles,  local  handwoven scarves,  hats, clothes pegs, batteries, carpets,  balloons, reading glasses, nail varnish,  shoes, shoe laces, and on and on. 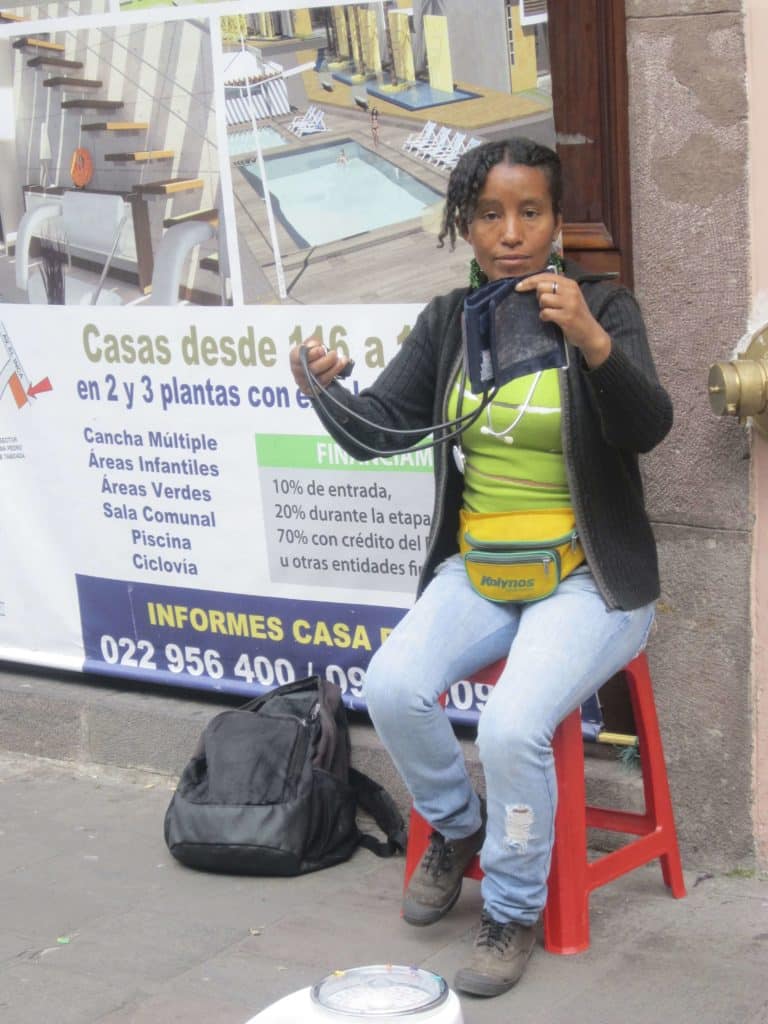 The most unusual vendor I saw was the “Doctor” standing on the sidewalk with a scale,  a stethoscope and  an instrument to measure blood pressure.  When I wanted to take a photograph,  I needed to pay her a quarter – which I considered less embarrassing than being weighed and taking my vital signs and to have this information shared and discussed by the surrounding crowd.   Each vendor has a chant about what they are selling and most of it is on offer for “un dollar” creating a cacophony of sounds. The women bring their babies to work and are very loving and patient and children are everywhere, sweet as can be because of the love they receive. 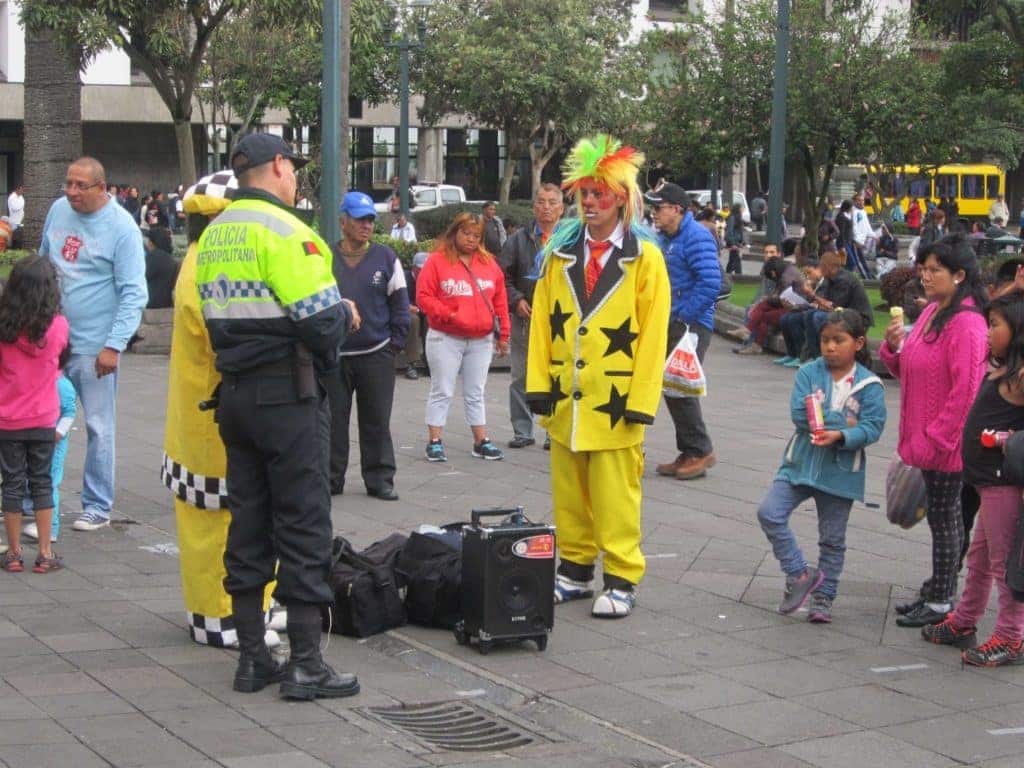 The Plaza is also a great place for a concert. The Metropolitan Church has a balustrade and several steps for people to sit on, like the upstairs of a theatre with the actors in the center and the rest of the crowd completing the circle – Theatre in the Round style. Today there must have been 1,500 people gathered around watching an impromptu open air show, everyone having a great time, laughing and interacting with the players. The Police looked on amused and in silence.  This area has a lot of food stalls and restaurants and it is where I  choose to eat most days.  It is magical and hypnotic and I always spend more time standing around and watching the scene than I intend to do. 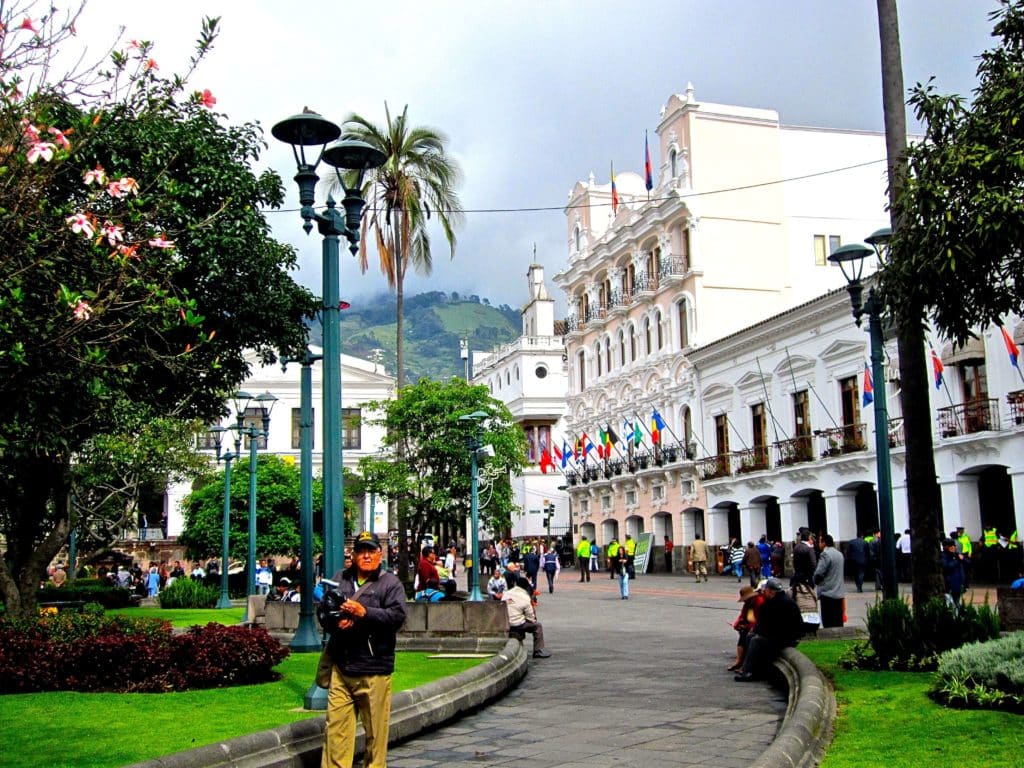 To quote Ralph Waldo Emerson: “Life is a journey not a destination”. This is currently my journey and with so much more to explore,  I hope I have a long way to go before the “destination” !!