This is a ” Micro Distillery”,  so called because it produces less than ten thousand bottles of rum  per year.

The gold standard for rum is the production  that comes from the Caribbean, where it was “discovered”  in the 17th Century by the British Colonists when they  plundered their way across the globe in the name of The British Empire.  Rum is not unique to the Caribbean and much “moonshine” has been produced all over the world, using homegrown fermentation processes.

Over the last ten years there has been a growth of Rum Distilleries in the USA,  accelerated by the growing interest in Craft and Artisan Cocktails. where rum is appreciated for being one of the most mixable spirits in these complex and sophisticated drinks.  It is now on a par with gin, whiskey and cognac, where one can see bartenders “shaking” it into modern cocktails with exotic names, furthering the demand for rum. 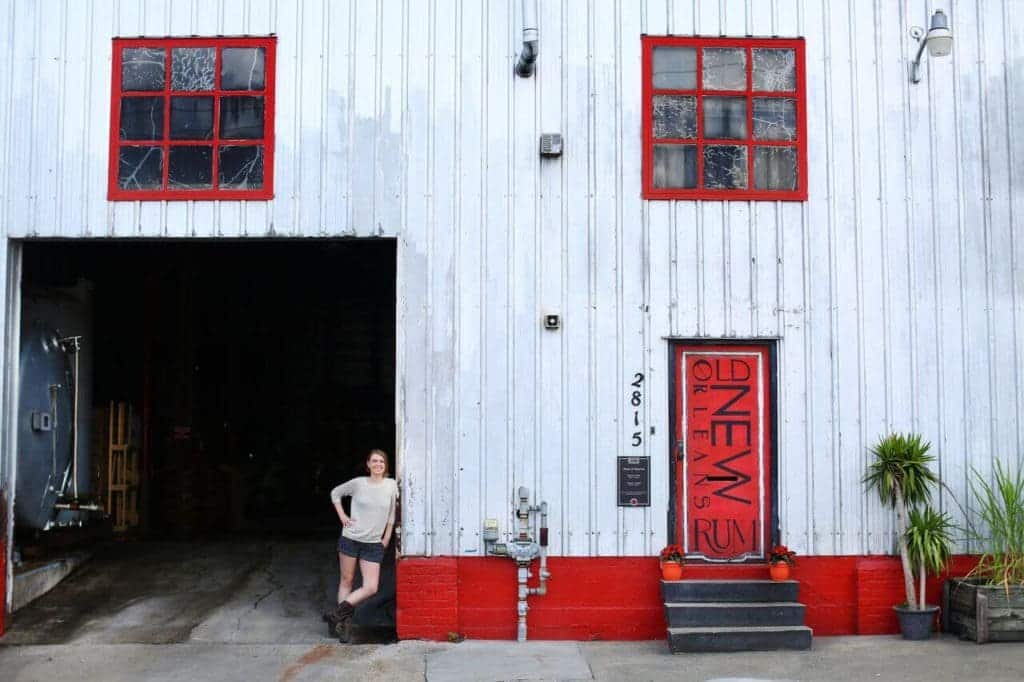 The Old New Orleans Rum Distillery is located in the Eighth Ward of the City of New Orleans, in a low key industrial neighborhood at 2815  Frenchmen Street in Sugar Hill, Gentilly.   It is close to an abandoned railway line,  where the street is potholed,  with tall unkempt grass growing along the sidewalks.  The Distillery  occupies an historic, one hundred and fifty year old Cotton Storage Warehouse dating from the days of Slavery, with soaring wooden ceilings and thick brick walls now aged in muted colors of ocher, orange and brown.   During the devastating Katrina Flood of 2005,  the Eighth Ward experienced severe damage adding another layer of history to the walls of the old Warehouse –  it “earned” a watermark,  now identified with a plaque, eight feet above the ground, showing how high the flood  waters rose when the Lake and the 17th Street Canal flooded and is still visible today more than ten years later. 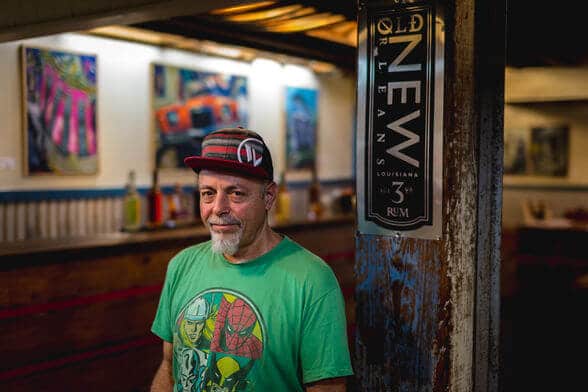 The Distillery was founded by James Michalopoulos, a local artist and sculptor,  well known both locally and overseas for his iconic paintings of New Orleans.  His style is colorful and distinctive,  using lively colors, thick paint and a palette knife for texture.  The paintings  can be whimsical with skewed perspectives and they are very representative of New Orleans life, architecture, and characters.  As an artist who understands the New Orleans culture and vibe, Michalopoulos was selected on six occasions to design posters for the New Orleans Jazz Fest – an honor and a true sign of recognition in this community. 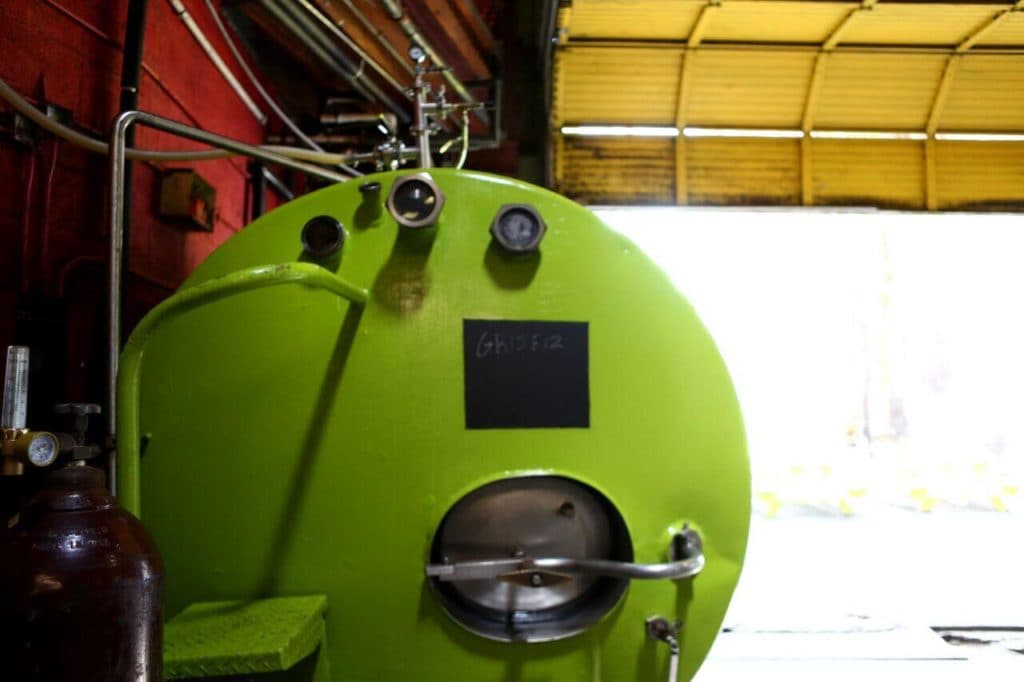 James Michalopoulos was  successful in acquiring a Distillery License in 1995 and  began his Rum Company, together with two local Distillers and a couple of Engineers working in this beautiful old Cotton Storage Warehouse.  The team were also responsible for installing and designing all the tanks and pipes used in the Distillery. It was no easy task to formulate the original recipes and it required research, patience and experimentation.  Learning as they progressed and refining their methods  and recipes through trial and error, rejecting a lot of product until they were satisfied, ultimately, they were able to produce a good Premium Rum. 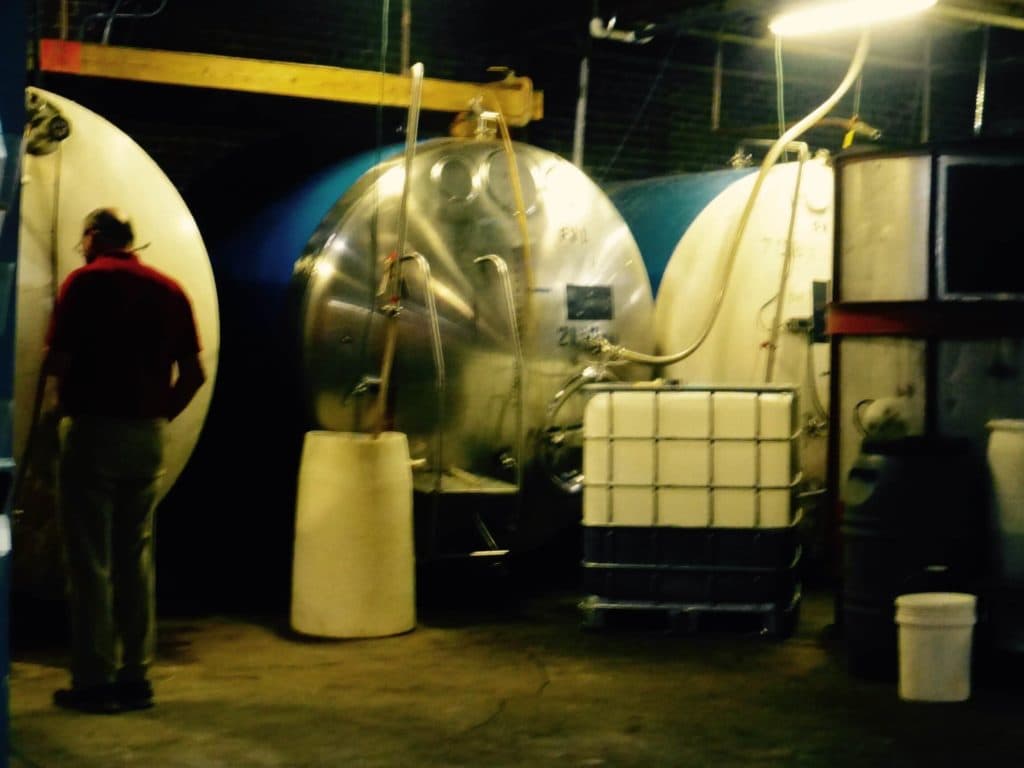 The Making of Rum

The making of rum is part art and part science and involves several chemical processes and a team that includes Distillers and Engineers.  Distillers create the recipe in which to  combine the ingredients and most importantly to oversee the fermentation throughout its entirety.   Engineers are an equally essential part of the team as it takes careful mathematical calculations, using  complicated fractions, to master the distillation column, that is, to know at all times  how the process is going, what needs to be added and what should be separated or removed.   In the distillation of the spirit, it is essential to collect the fraction that contains the ethanol and the flavor components and to remove the collection of the methanol and other unpleasant tasting molecules.

In order for fermentation to take place, two components are needed: raw material in liquid form that contains sugar, in this instance molasses, followed by the addition of yeast. 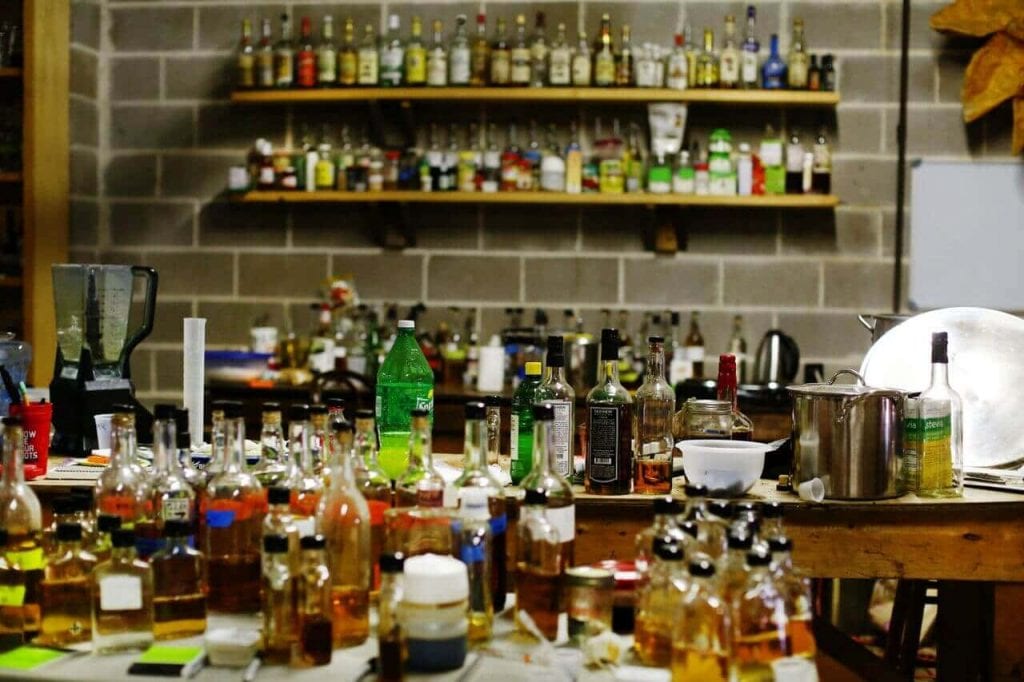 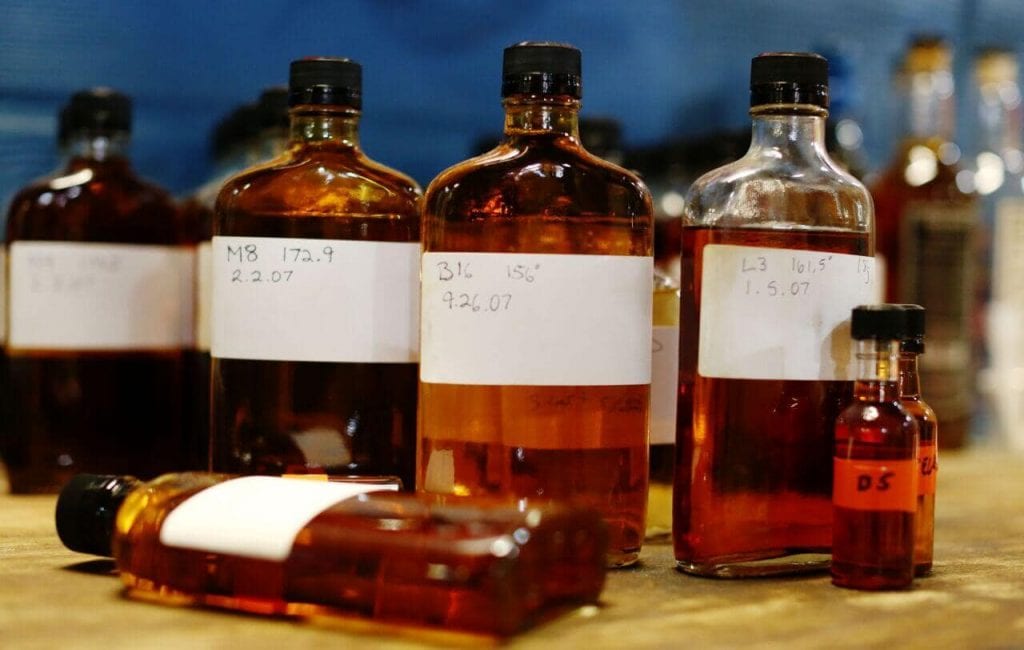 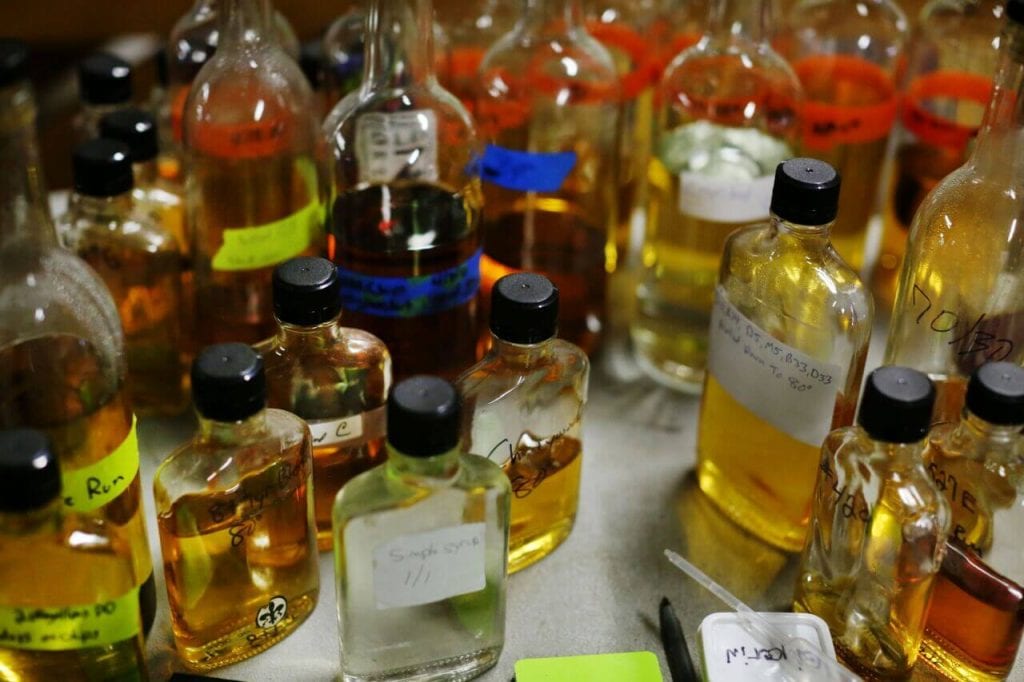 Rum is made from water, molasses and yeast.  It sounds simple, but is a lot more complicated.  Once the molasses has been fermented, it creates ethanol (or alcohol) while at the same time producing undesirable by products like methanol and ketones, which  can be poisonous.  This is where the most important step occurs, creating a spirit that is good both for taste and safety and the skill of the Distillers and the Engineers are critical to the process.   The fermentation needs to be watched constantly as it must be tested and tasted on a regular basis.   Although this is a science it is not an exact science or an exact recipe and the Distillers and Engineers combine their knowledge with taste, smell, and intuition. 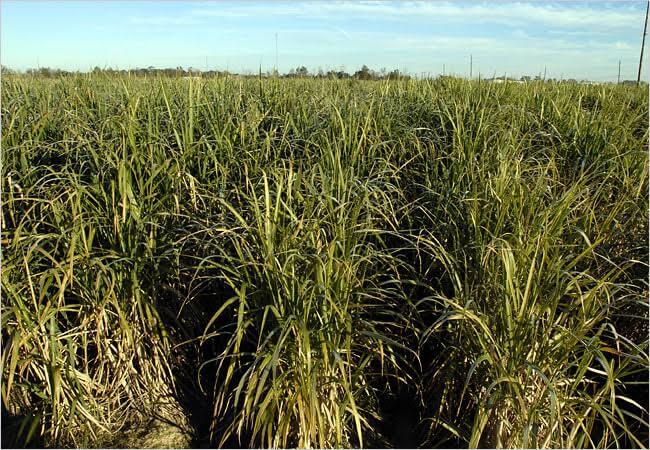 New Orleans is surrounded by acres of sugar cane plantations and the history of molasses  in Louisiana reaches back to the  ignominious days of Slavery, where molasses was made by the Slaves in horrendous conditions.   Originally James Michalopoulos intended to open a winery, but it became apparent that the terroir was unsuited to growing grapes and because of the number of sugar plantations in the area, rum was a more obvious drink to pursue. 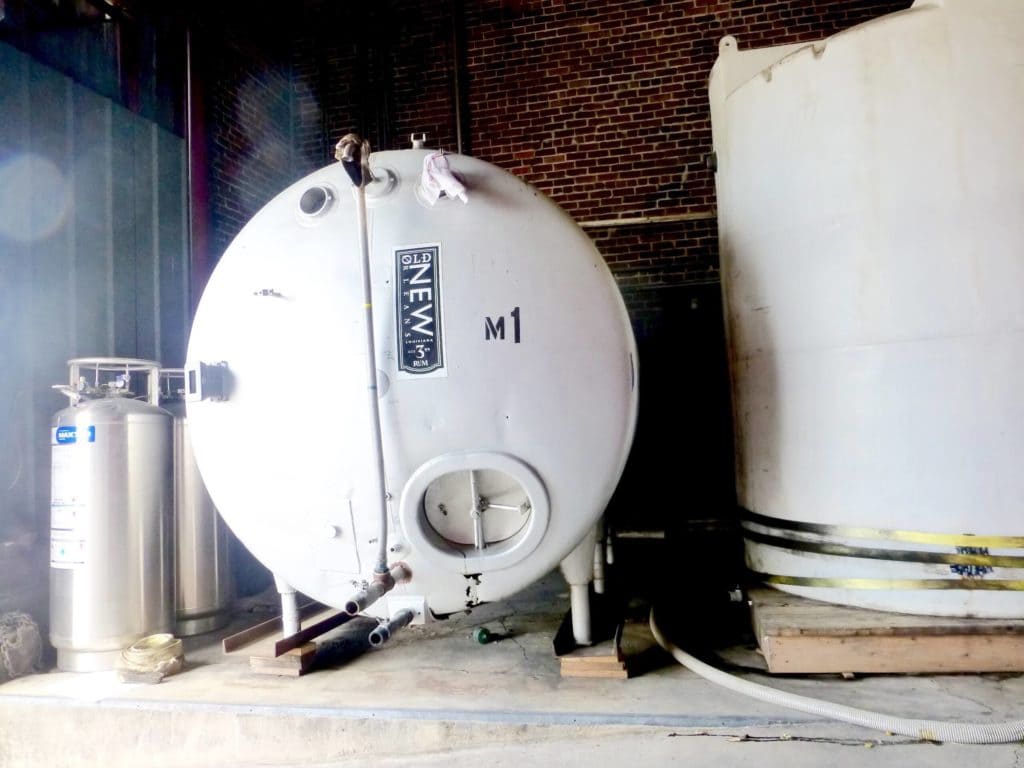 The unique flavor and characteristic of each rum comes from the sugar cane or molasses that is used in the  fermentation process.   The sugar cane for this rum goes through two pressings only and releases a clear, sugary liquid.  This is slowly boiled until it thickens, becomes concentrated into a syrup and takes on a  golden color, at which point it is Molasses.  Old New Orleans Distillery  sources its Molasses from La Fourche Sugars of Thibadaux,  a Century old family run Sugar Mill about fifty miles away, that is transported  to the Distillery by truck. 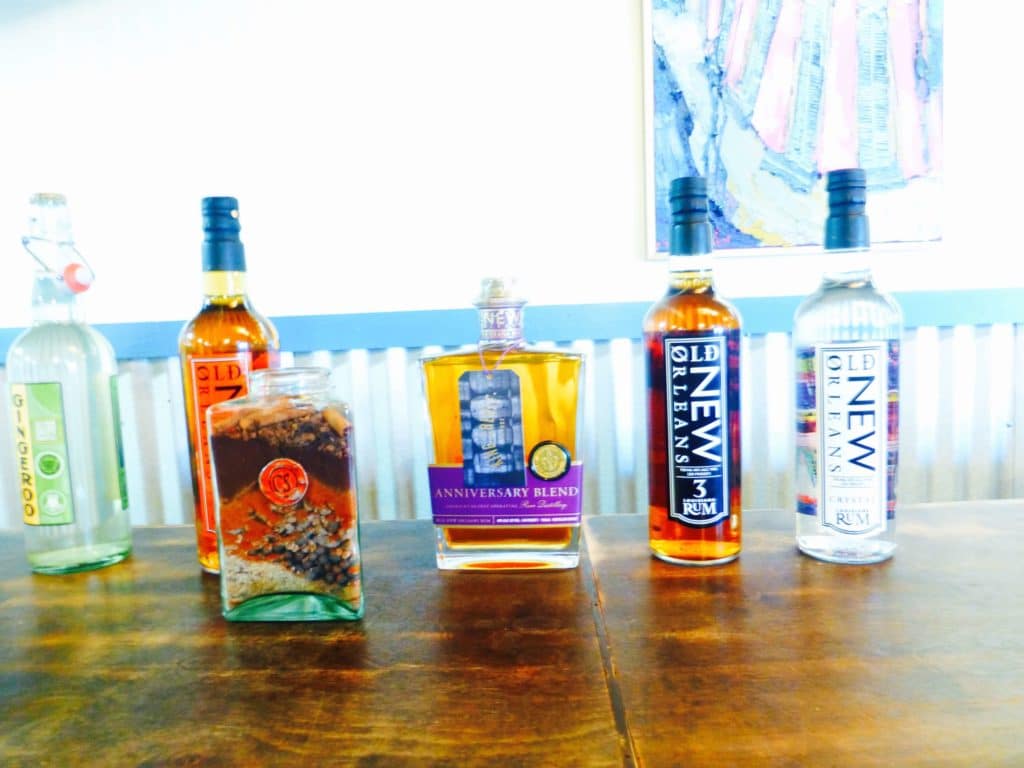 Tours of the Distillery are easily arranged.  Arriving at the New Old New Orleans Rum Distillery, bottles of the various Rums are arranged on the counter in the Tasting Room and guests are invited to sample anything and as much as they want, prior to beginning the Tour. 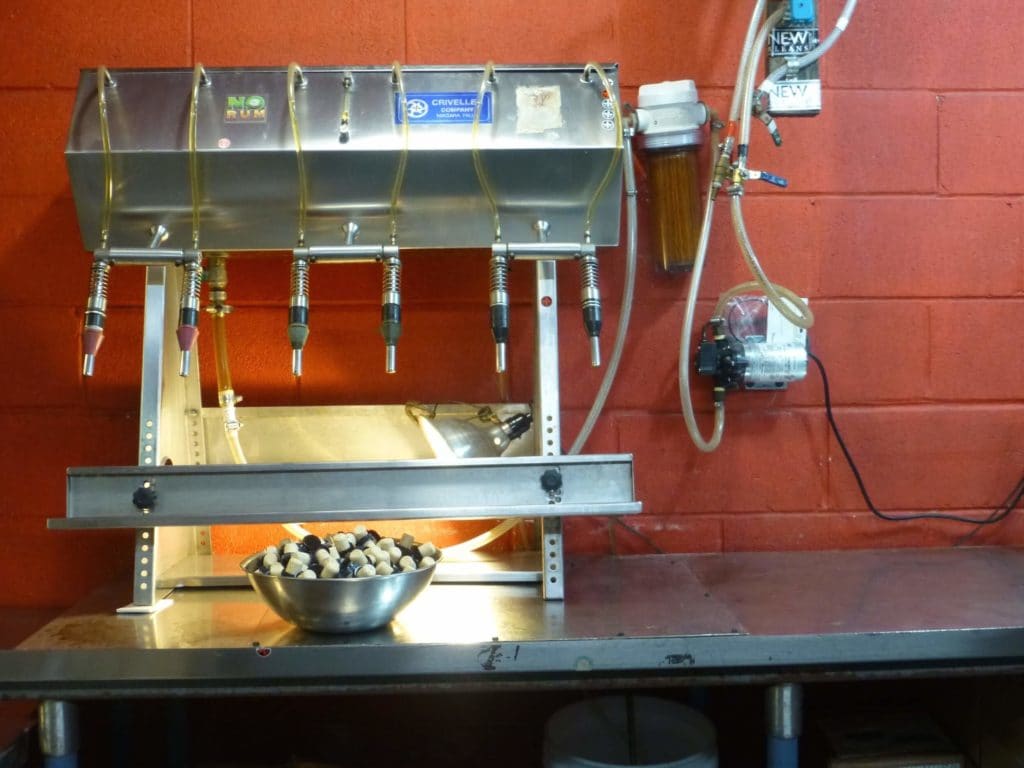 Old New Orleans Distillers make everything in house and it is all batch labelled and made by hand – the only exception being the corking process that is done by  machine.  All the vats are designed and made by the in-house engineers and there are  two distillers with highly developed palates regularly testing the rum during its journey of fermentation and distillation. 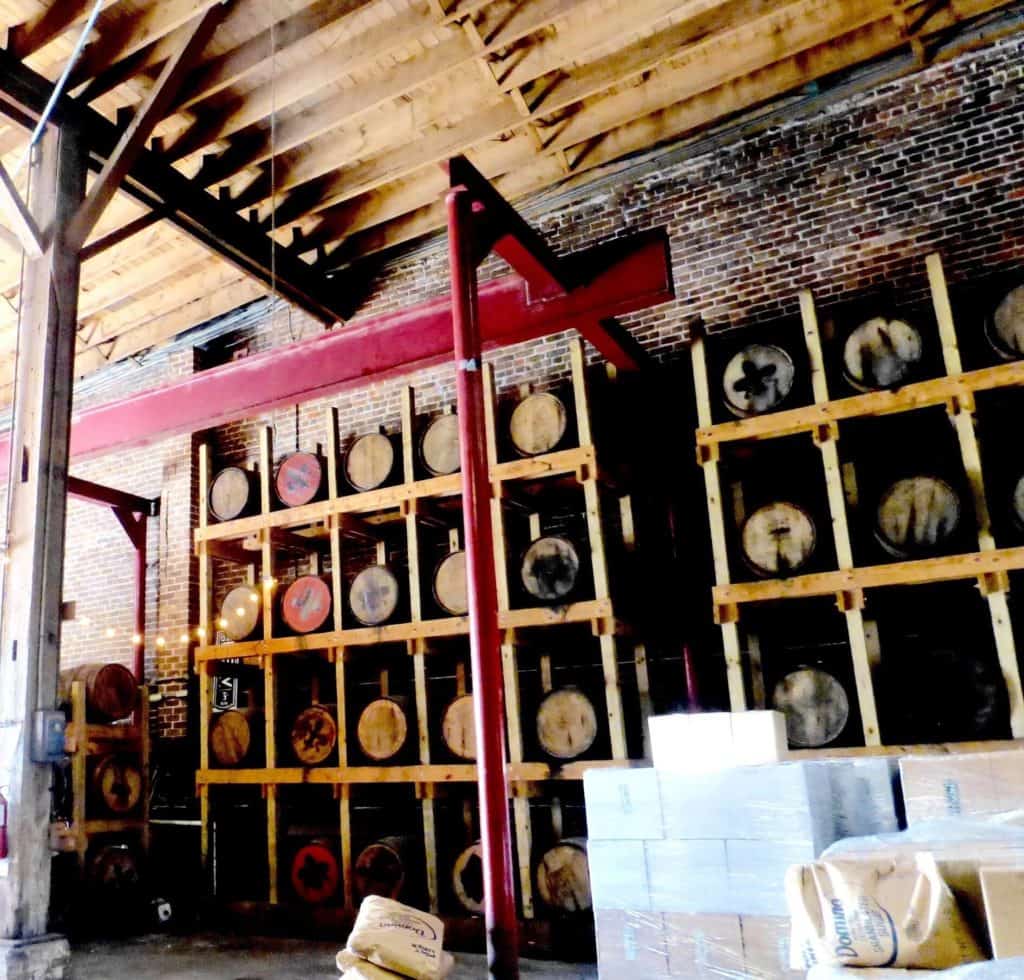 The Old Cotton Warehouse is a beautiful backdrop to the huge modern steel vats holding the distilling liquids –  a contrast of old and new, with several pipes running through the building connecting the vats and other machinery giving it the appearance of an oversize science laboratory. 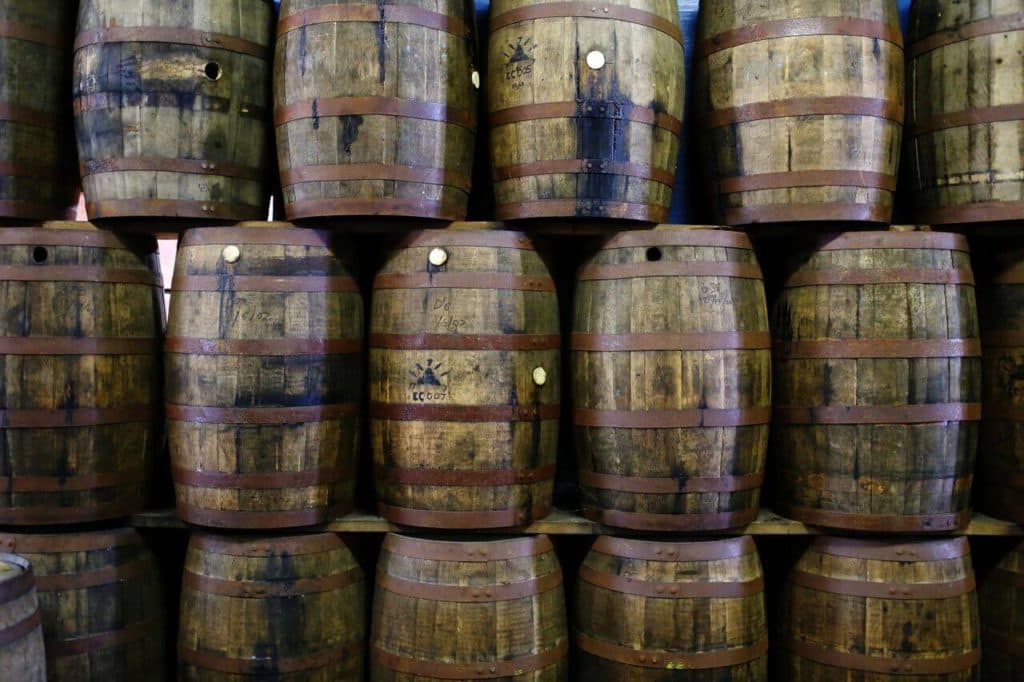 The American White Oak Charred Barrels  that store and age the rum are sourced from Bourbon, Sherry and Whisky  producing distilleries where they are only permitted to be used once.  Rather than being discarded, Old New Orleans Rum acquires them and they are re-used for storing and aging the Rum and it is these “seasoned” barrels that  give the rum its distinct “notes” and special flavor. 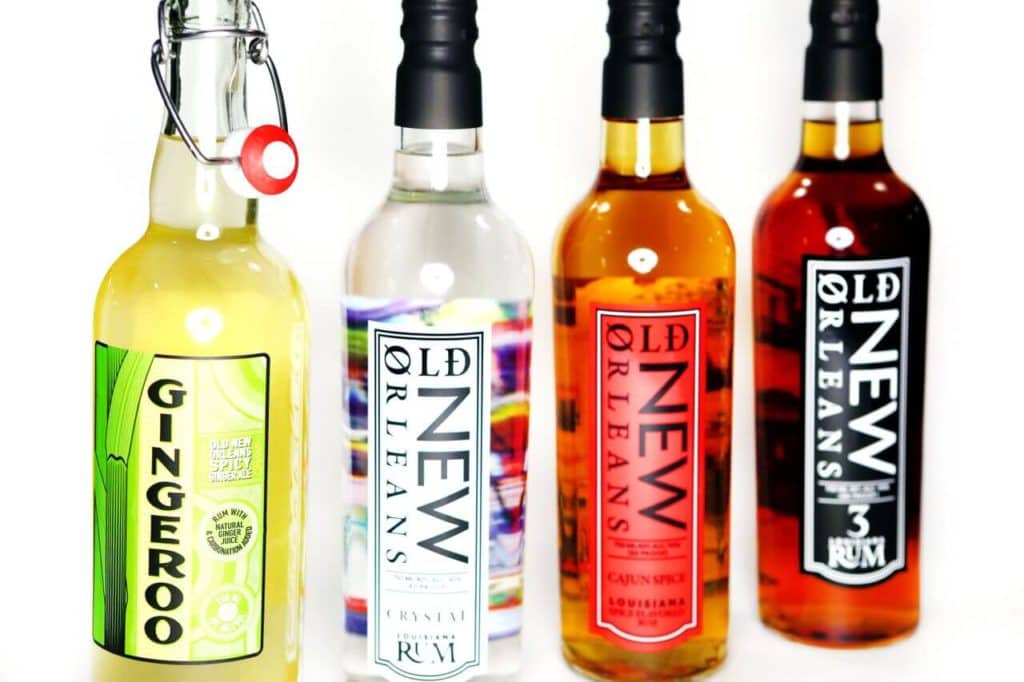 Crystal Rum a light bodied white rum, not aged,  delicious used in daiquiris or mojitos.
Amber Rum,  a medium bodied blend,  aged  3 – 5 years in Charred White American Oak Barrels, previously used to store whiskey, giving it  a smooth finish.   Caramel, made in-house from local cane sugar is added to give it the caramel color.  This is suitable to be served “on the rocks” or in your favorite cocktail recipe.
Cajun Spice Rum,  a blend of homemade infusions, aged three years, using the crystal rum with the addition of  cinnamon, cayenne pepper, ginger, cloves and nutmeg. 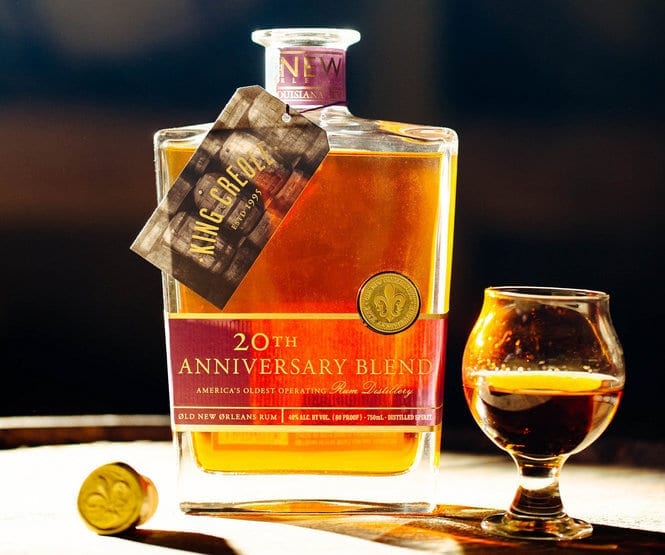 King Creole, 20th Anniversary Blend. signed and numbered, Limited Edition,  that is delicious and smooth to the taste, dry with a hint of caramel, aged 8-13 years in the old oak barrels.  This is the top of the line Rum and can be sipped slowly, with or without ice, as one would do with a good Bourbon. 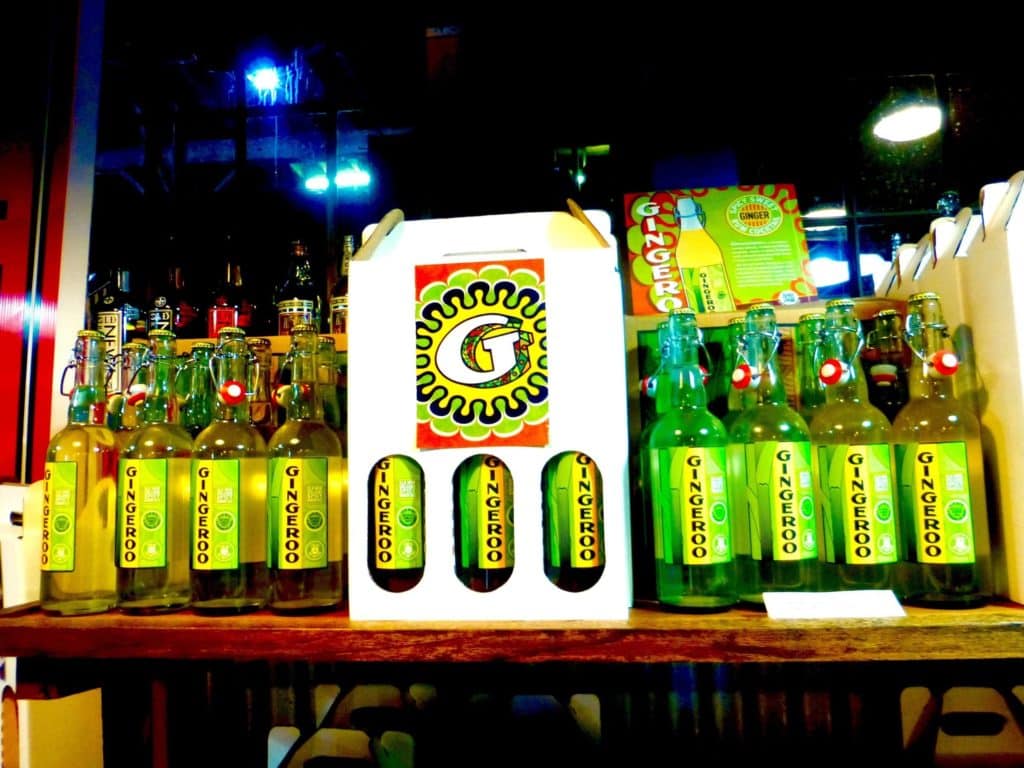 They also make: Gingeroo,  a carbonated ginger drink, 20 per cent proof,  that incorporates  the Crystal Rum.  It is made using fresh ginger puree and can be drunk straight or mixed with more rum or other liquors for cocktails.

With a much better understanding of the process of making rum, after completing the tour , guests are  directed back to the Tasting Room and offered as much Rum and Gingeroo as they want to sample, including the expensive Anniversary Rum.  It is also where orders to purchase are placed. 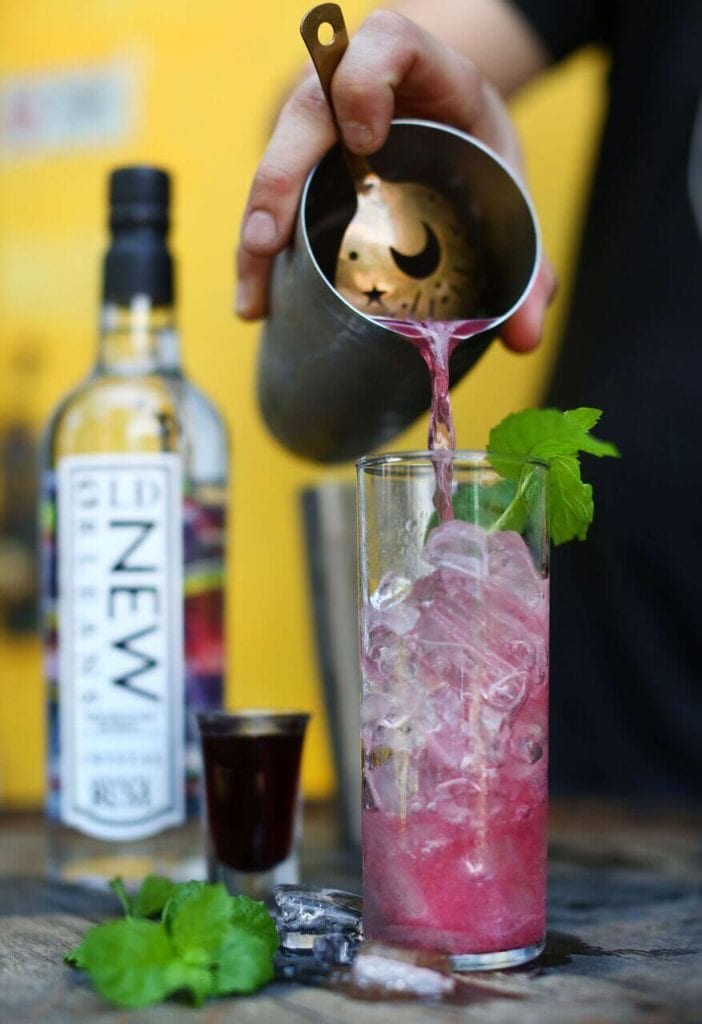 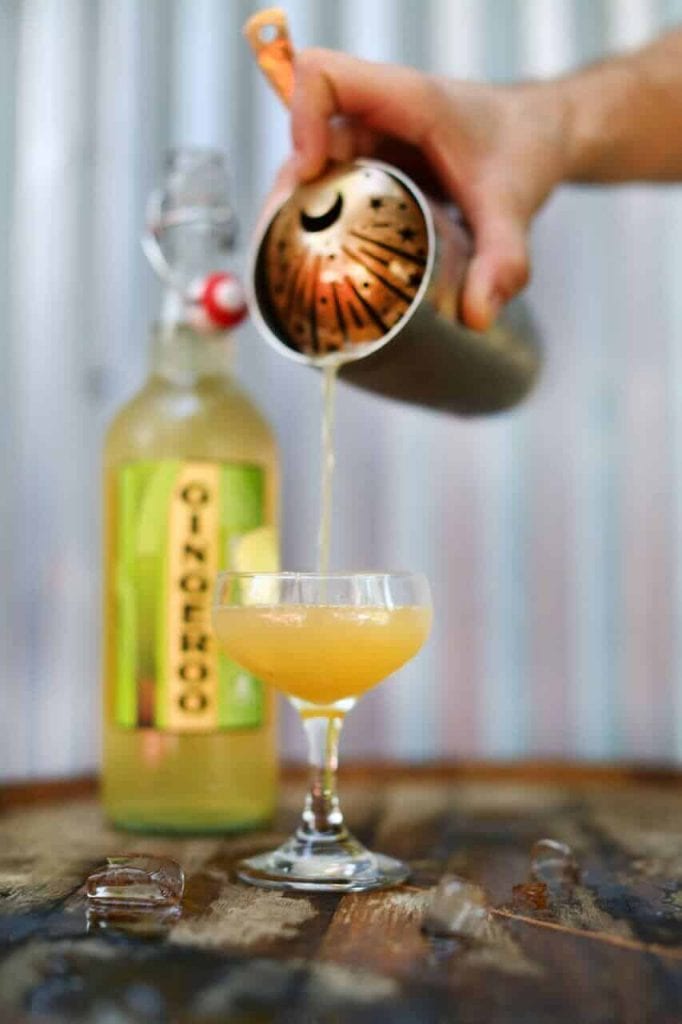 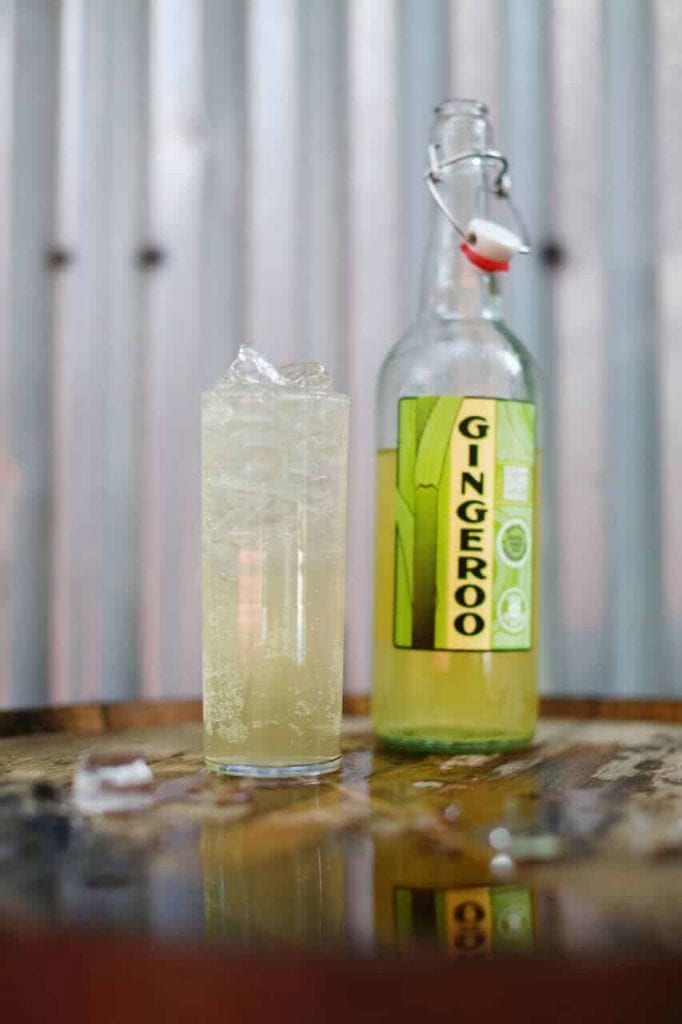 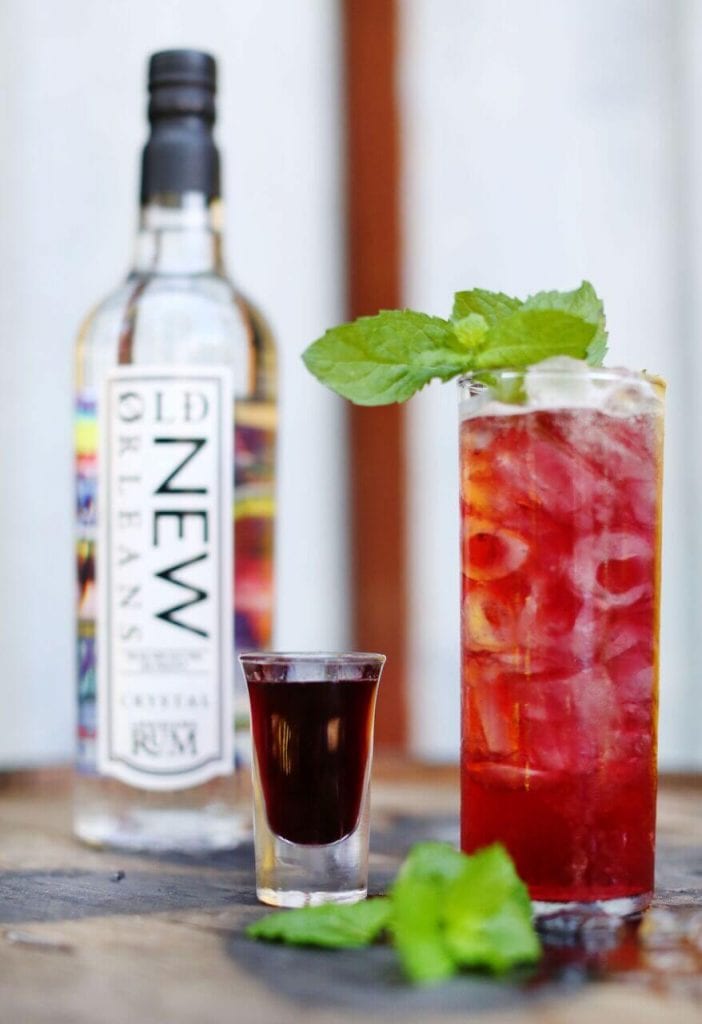 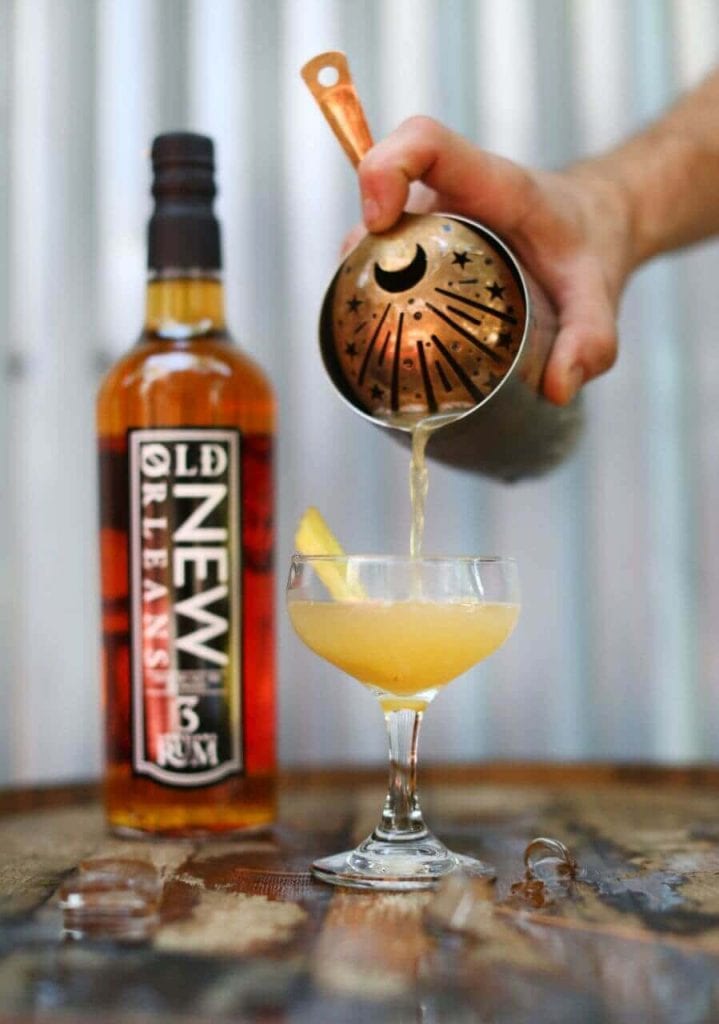 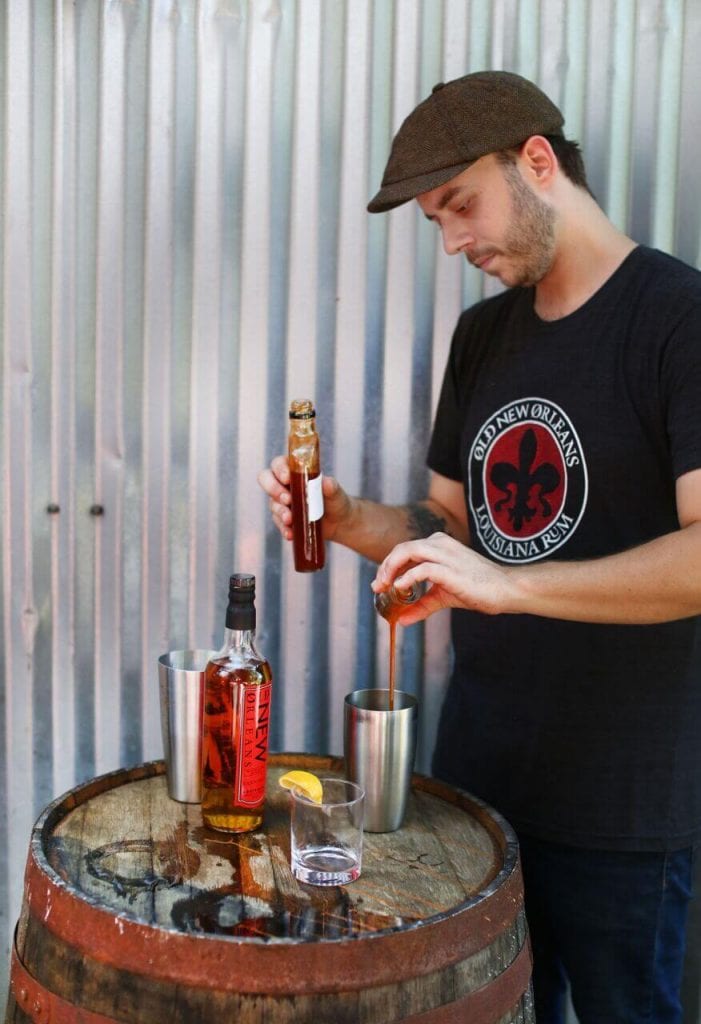 Old New Orleans Rum has established itself as a respected  artisan Distillery, producing a high end spirit, catching the wave of the cocktail driven bar industry,  where rum is a diverse spirit that forms the foundation in a number of cocktails, such as daiquiris, coolers, mojitos or punch.  Plus,  with the premiumization of rum,  it can now also be enjoyed “straight”  or over ice. 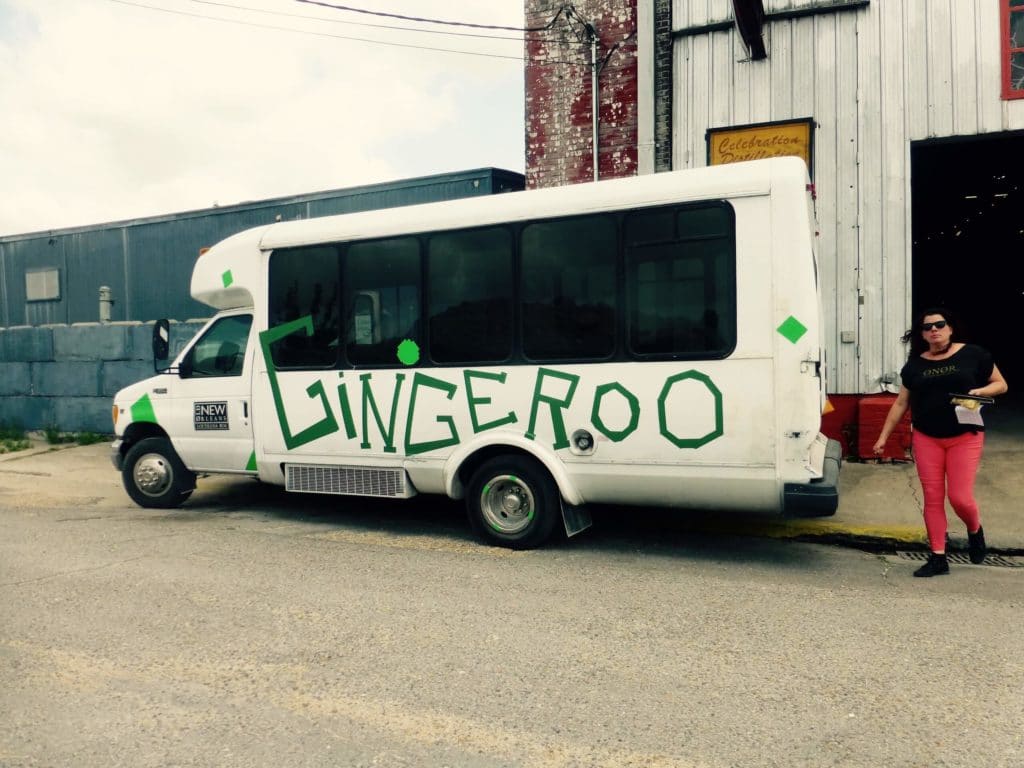 This is a very interesting tour and a fun experience, away from the frenetic French Quarter neighborhood.  If you like your drinks strong and early in the day in the form of a liquid breakfast, then this is a great way to begin.  There is no need to be concerned if you have one drink too many, as  Old New Orleans Rum has a vintage bus that will pick up  and drop guests off at the Hotels in the tourist neighborhoods. 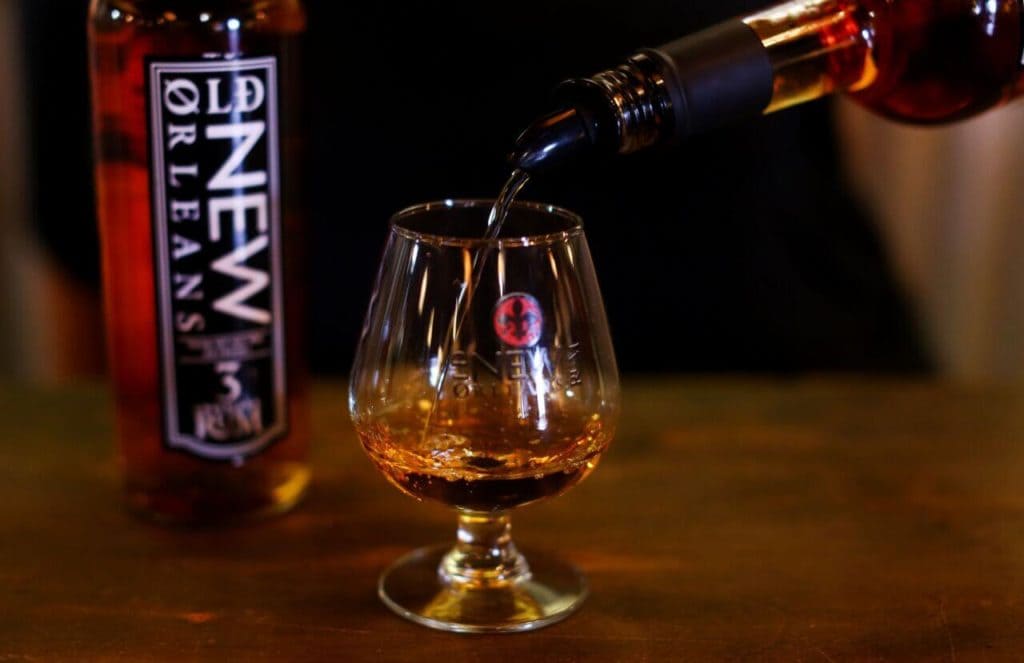 o quote from the Old New Orleans promotion pamphlet:  “We are committed to an extraordinary customer experience, supporting our local economy and creating a rum worthy of the celebration that is New Orleans.”

Having written that the best Rum comes from the Caribbean………… Chris Blackwell, who founded island Records in Jamaica in 1959, introducing us to Bob Marley, Grace Jones, U2, plus many more,  then went on to found the award winning Island Outpost Hotel Group with some of the most expensive resort accommodation in the world – opened a Rum Distillery  in Jamaica a few years ago, distilling a dark, golden rum under the label, “Blackwell Fine Jamaican Rum, 40% Alcohol”.   The Family have been well established in Jamaica since the early 20th Century,  when his Grandfather had operated a Rum Distillery among other commercial interests.   Now, having built an empire from his previous  careers in Music, Hospitality and Real Estate,  Chris Blackwell  has returned to the family “roots”,  advancing his  empire yet again by going into the Rum business.    Turning eighty years young this year,  he has shown no signs of slowing down.