VANCOUVER  TO  GABRIOLA  ISLAND BY  SEAPLANE. 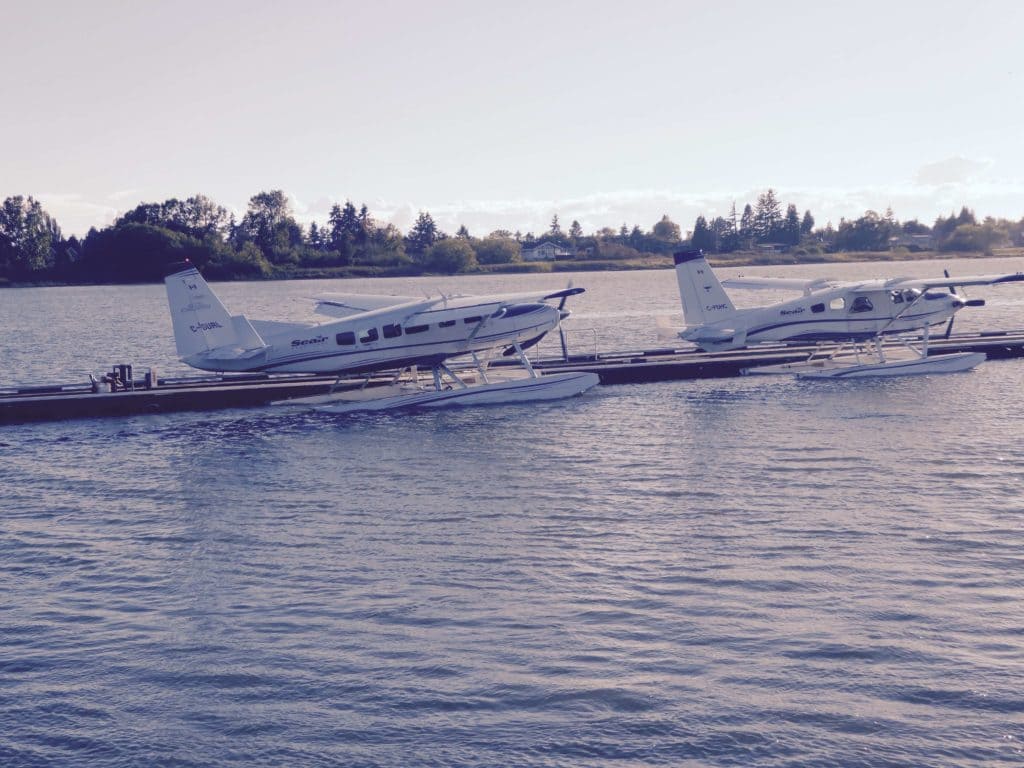 Sitting in the departure lounge at the Vancouver Float Plane Terminal waiting to leave for Gabriola Island, I was able to observe the pattern of sea planes coming in and landing on the water.  Initially, they were tiny specks in the sky, but as they lowered themselves, I could make out the shape of the plane, its wings and spinning propellers.  It was fascinating to see how the pilots landed the sea planes on the water before tethering them to the gangplank and then helping the passengers disembark. 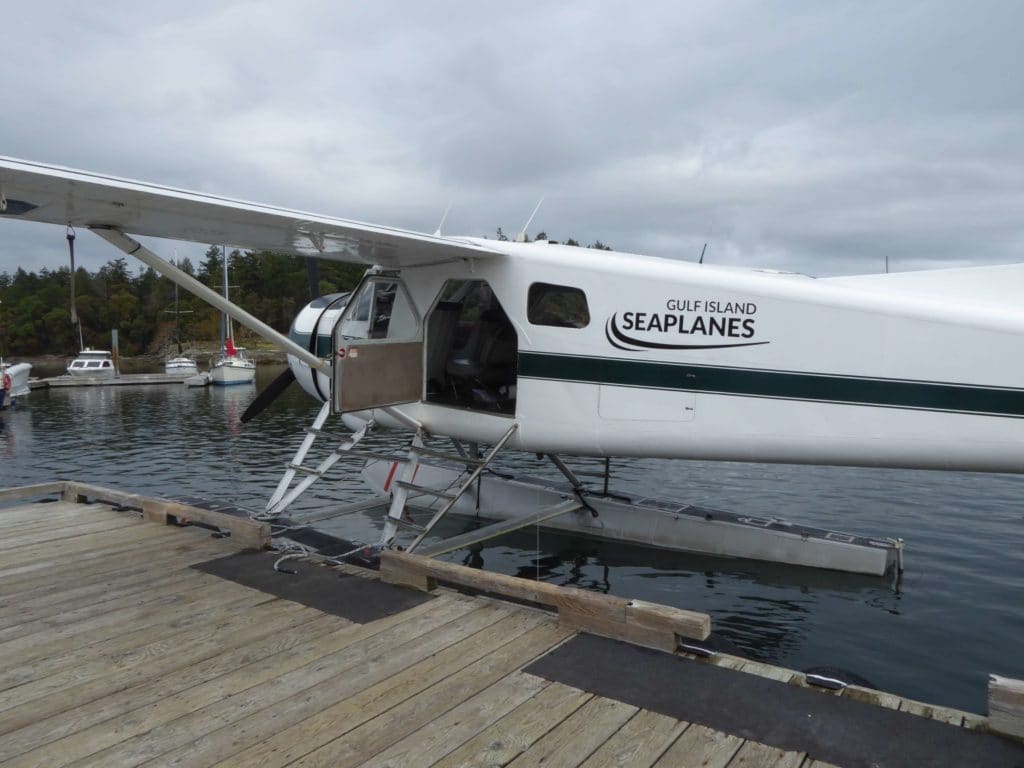 There are several Gulf Islands along the West Coast of Canada that are connected by ferries and seaplanes.  Gulf Air connects to four of these islands, Decourcy, Ruxton, Thetis, and Gabriola. The seaplanes have a schedule but are flexible and will delay the departure if a passenger calls and asks them to hold the plane until they arrive, or make an unscheduled stop to pick up a package that needs to be delivered to the mainland.  It is a uniquely friendly and accommodating airline. 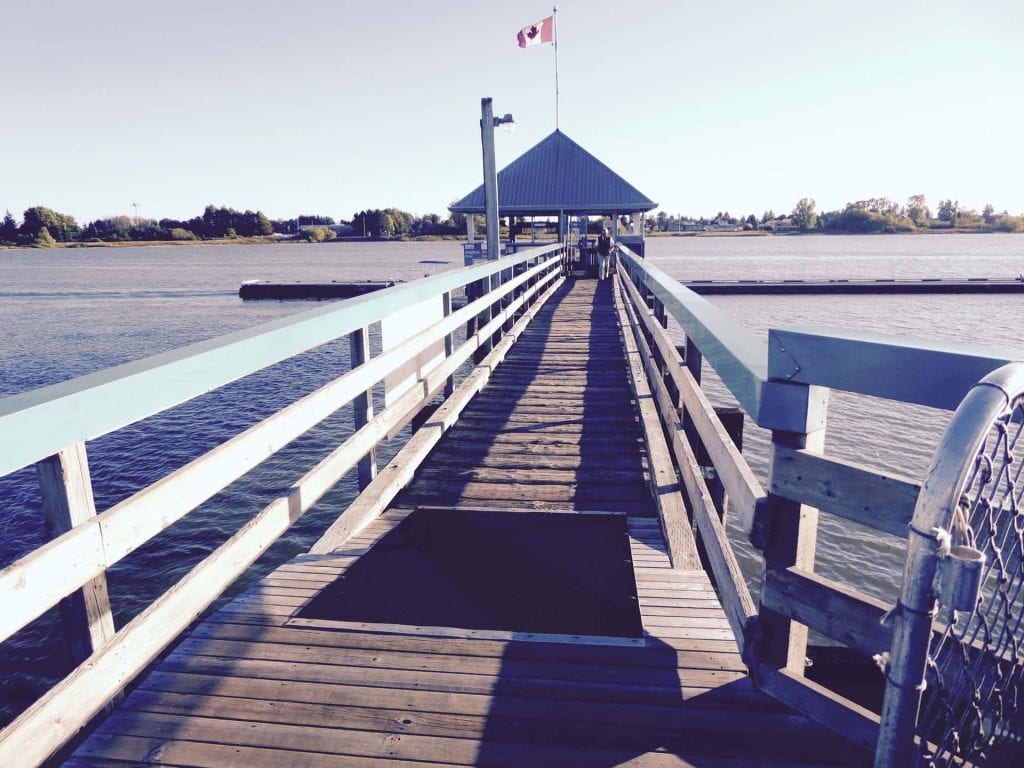 When our departure was announced, we followed the pilot along the walkway to the plane, like a hen with its chicks following, pulling our luggage along with us. 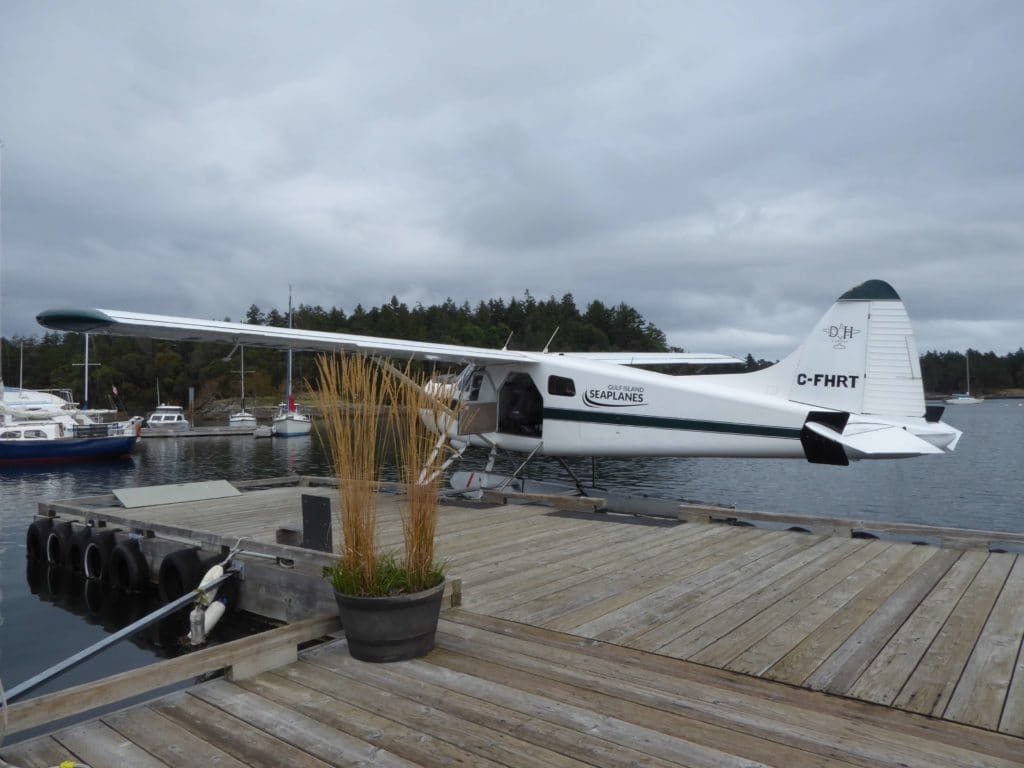 Boarding the plane and climbing into the cockpit, I became anxious and seemed to lose my center of gravity as the plane bobbed around in the waves caused by planes taking off around us. They allowed me to sit up front next to the pilot, as I had never flown this route before.  Not only did I have the best view, but I could also observe the pilot operating the controls. 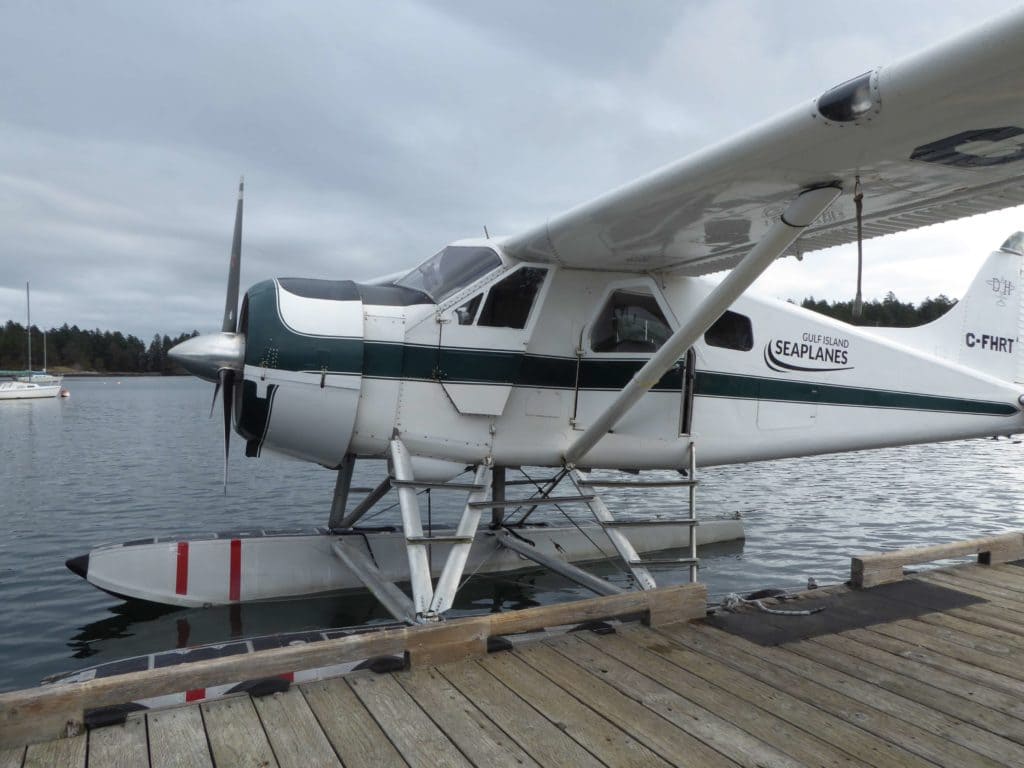 The plane was a De Havilland Beaver Seaplane, vintage 1956. Gulf Air’s fleet consists of two Beaver De Havilland Seaplanes that they own and one rented.  Three pilots including the owner Shawn, pilot the planes and they have been in service every day several times a day since 1956, flying between the Islands. They fly about five hundred feet above the ground (or water!!) at a speed of ninety miles an hour.  Safety is of the utmost importance and they never fly in high wind or ominous weather.  Each one is inspected and serviced every one hundred hours with a more specified service after four hundred flying hours

Fastening the seat belt, I was given covers to protect my ears from the noise of the engines. The pilot untethered the plane pushed it away from the gangplank, at the same time climbing the spindly ladder to his seat and closed the door behind him.   It was a full plane, five adults and a child, plus the pilot and our luggage. 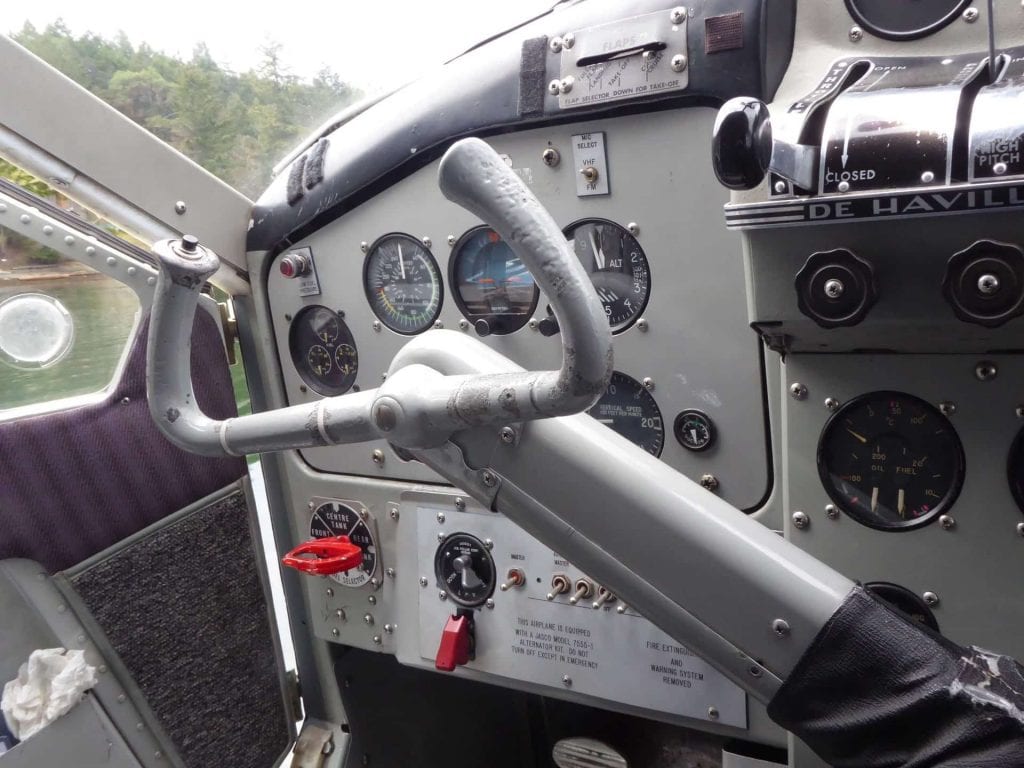 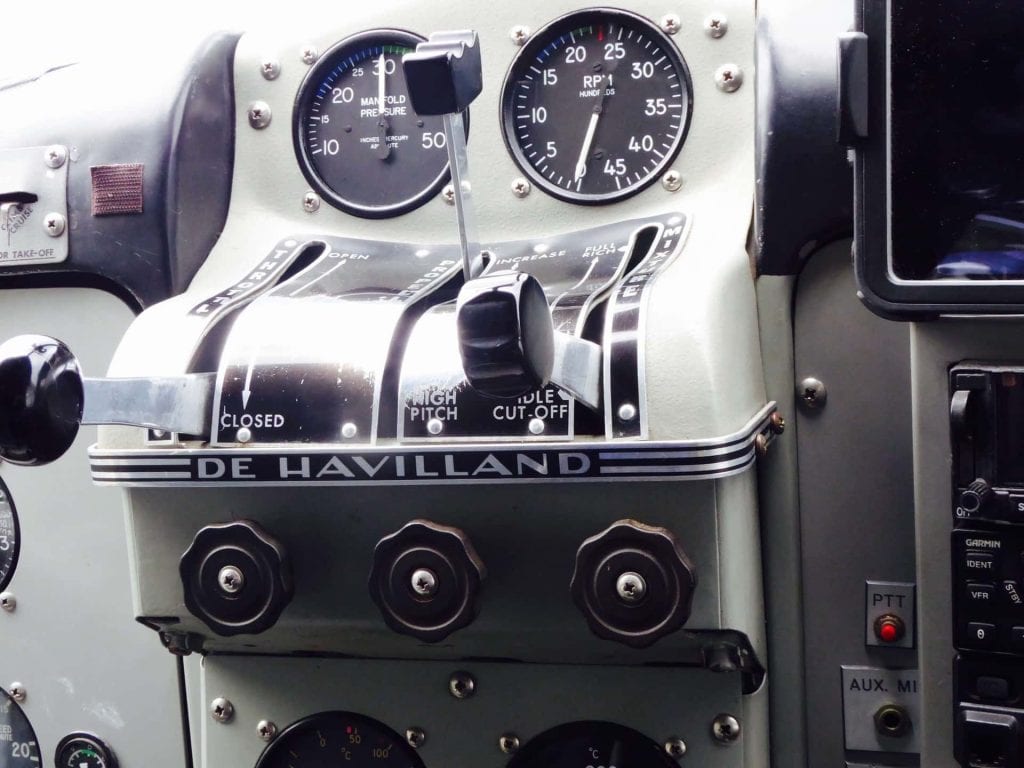 Looking around at the instrument panels and the equipment, I recognized this little flying machine had done a huge mileage.  It reminded me of an old car that goes and goes and never lets you down – hopefully !! The pilot checked the instrument panels before turning on the engine and starting the propellers. The plane gave a humongous roar, before doing a lap in the water and then rising steadily into the air.  No turning back now and no time to be scared.   The pilot was engrossed in flying the plane and had no time to offer reassurance.  Instead, I focused on what the pilot was doing and soon got used to the noise and vibrations. 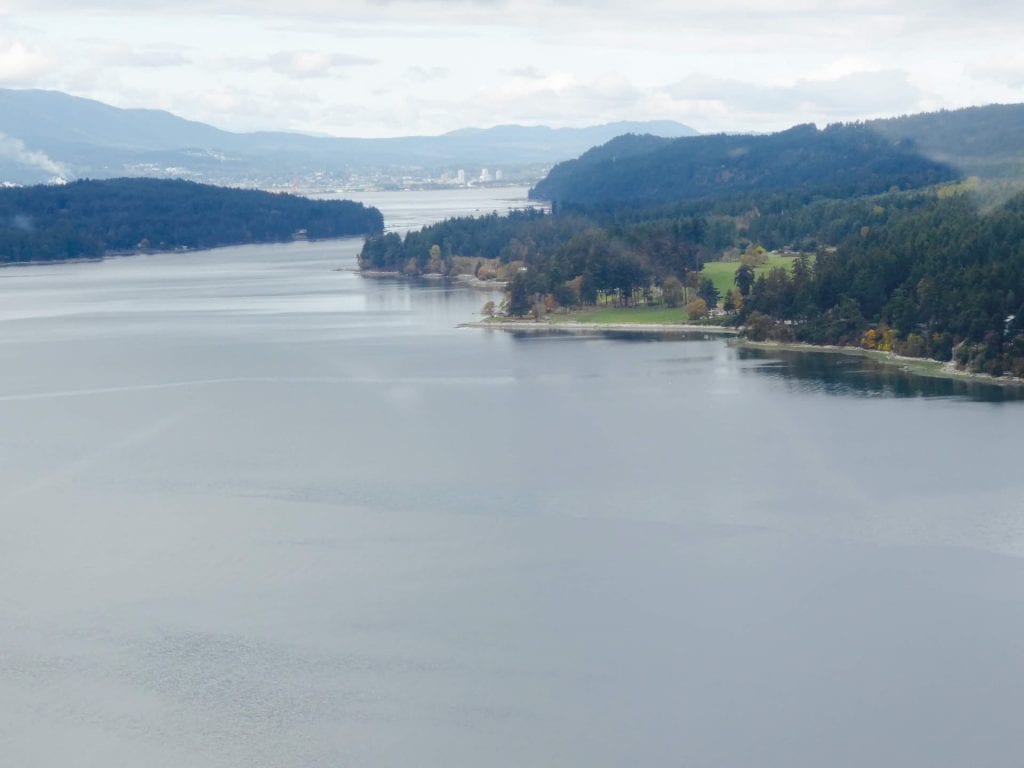 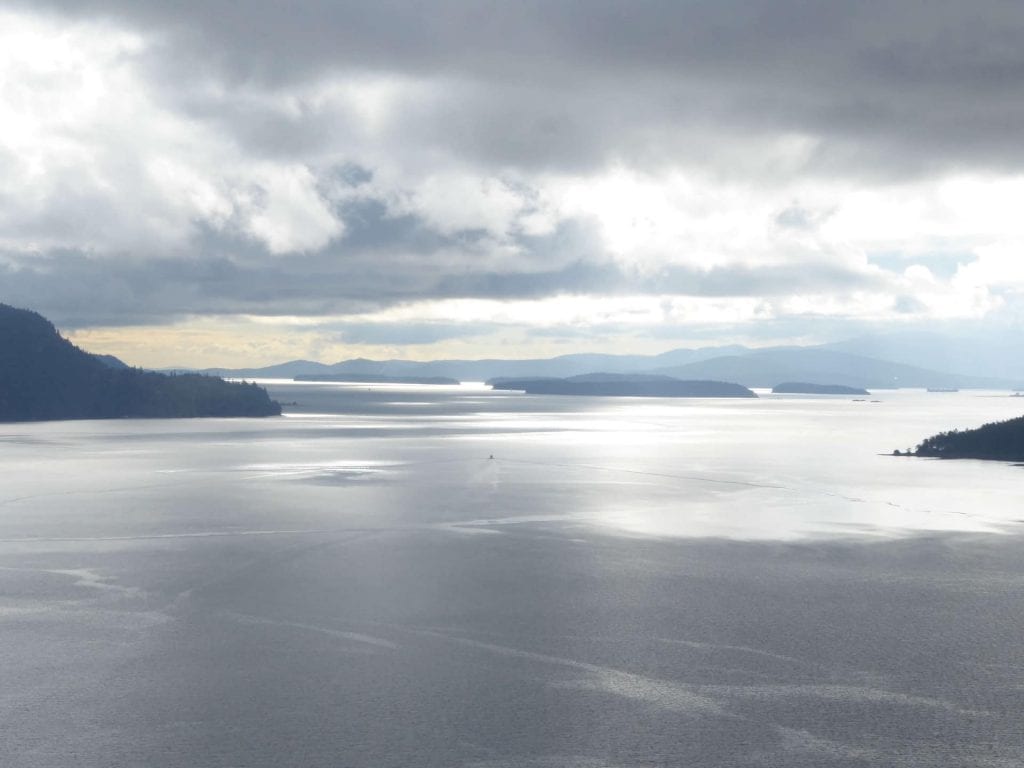 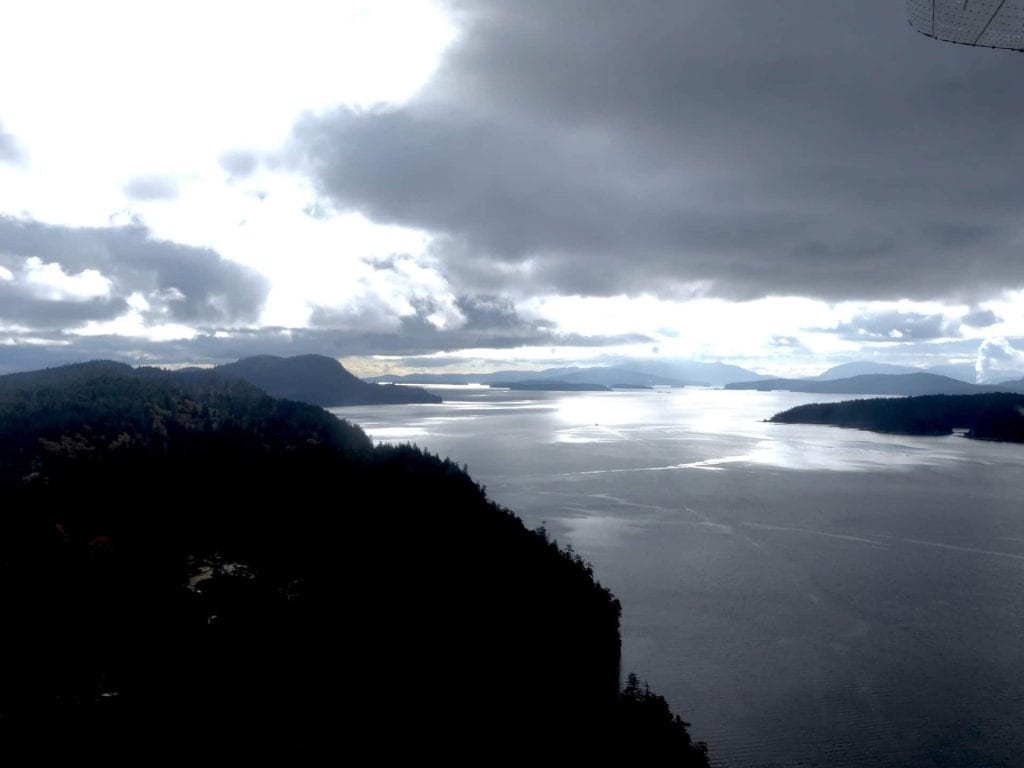 As I became aware of the view from the front seat, any trepidation I had about flying in this little “bird” vanished.  The picture unfoldng below was captivating. 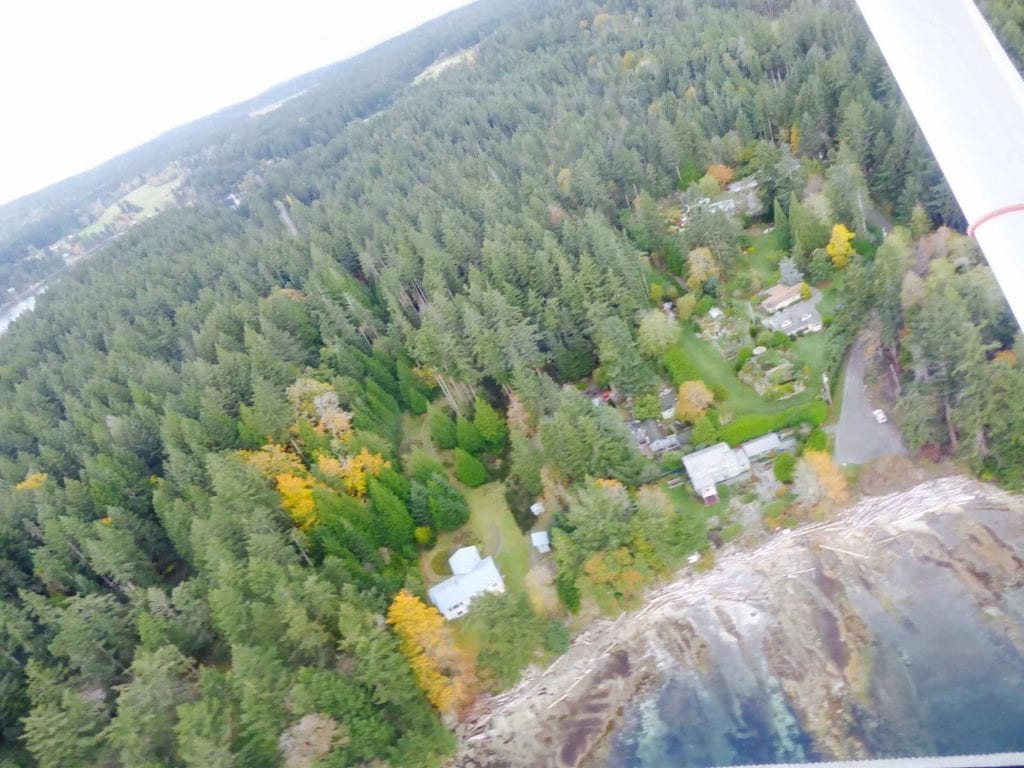 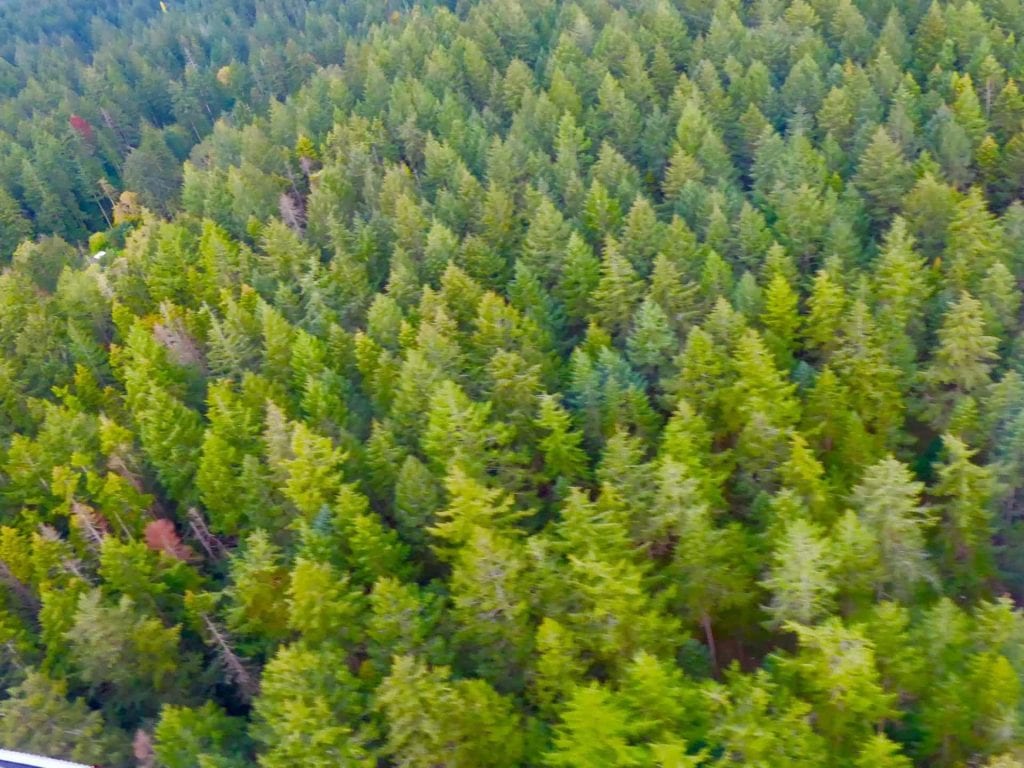 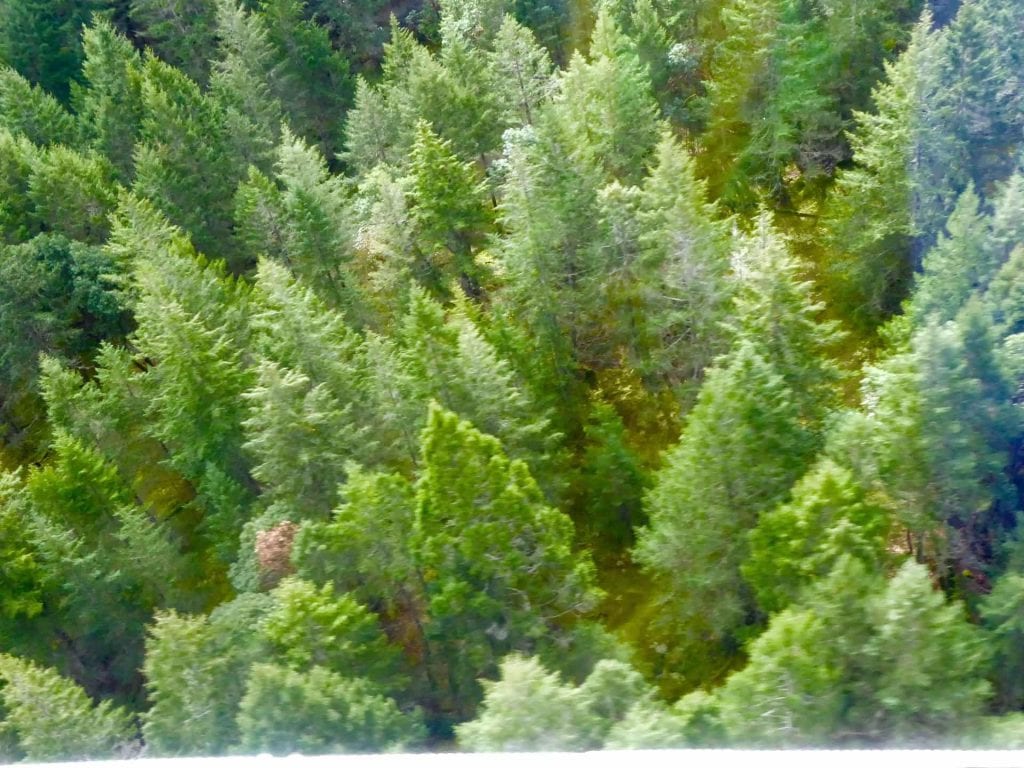 Looking down from the cockpit I was able to see the topography of the islands as we flew over them.  They were very green, some heavily forested and I could make out winding roads with little communities and harbors with boats. The plane was very steady once we were in the air and at times it seemed we were not moving at all – just perched up there in the sky!!  I wanted to ask questions but there was so much noise that I was left to my own observations. 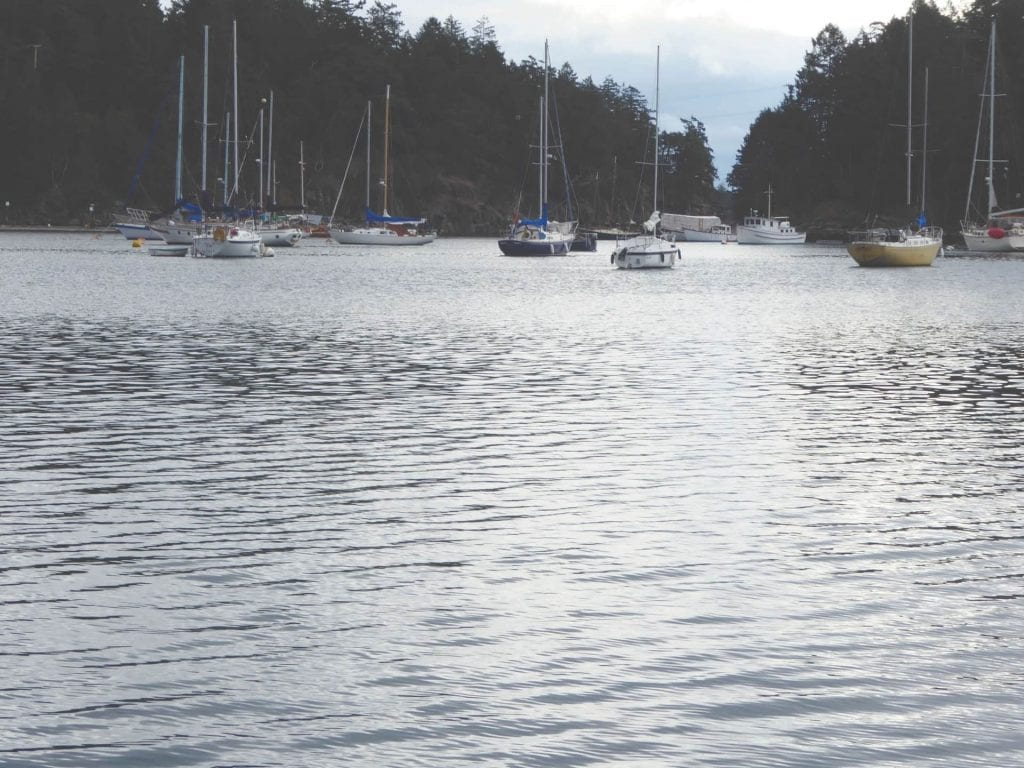 Twenty minutes after takeoff, as the sun was disappearing into the horizon casting shimmering reflections on the water, the pilot gently lowered the plane for landing on Silva Bay, Gabriola Island. He landed smoothly on the water and piloted us up to the landing gangplank causing all the little boats in the harbor to bob up and down from the waves generated by our landing. 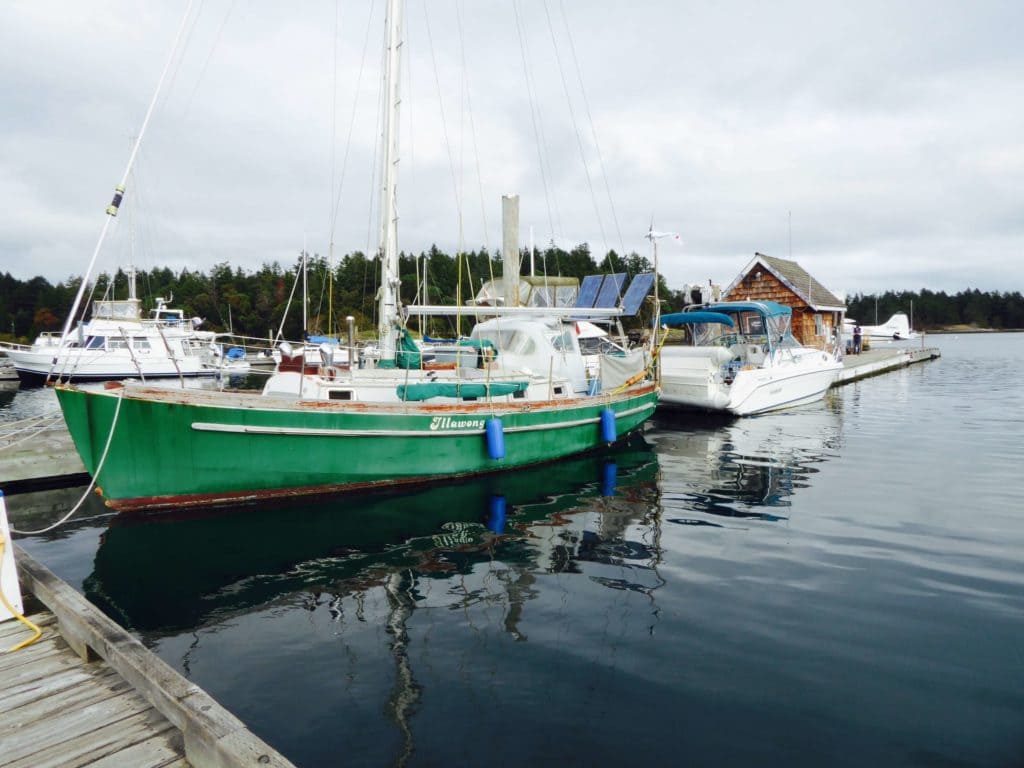