Visiting CASA MALCA in Tulum on the Riviera Maya, Mexico.

Webster Dictionary describes the word “Magic” as “The art of producing illusions by sleight of hand, mesmerized, dazzled, in a state of awe.”

No words can adequately describe Casa Malca, set in the tangled Caribbean jungle of the Riviera Maya. This is a spectacular setting for a laid-back luxury hotel, famed for its owner, Lio Malca, an internationally known collector of contemporary art.

The walls, floors and outside area are displayed with a curated, museum quality collection of artwork, sculpture and decorative items, placing it above and beyond  any of the other Tulum Hotels.

With its own private beach, excellent restaurants, and two swimming pools, it is the ultimate in laid-back luxury for the modern traveler seeking a unique experience.

There is no name and no number indicating one has arrived at Casa Malca. It was difficult to find the gate because it was constructed of bamboo and vegetation to blend with the natural habitat.

Approaching the end of the narrow road lined with eco-hotels and bars, I thought I was lost, when the GPS announced, “You have arrived.”

I stopped the car and parked it safely on the side of the narrow road. There was a guard at the gate, and he gave me permission to enter the property.

Walking slowly, taking in the beauty of the natural jungle setting with dappled sunlight peeping through the towering trees, I approached the entrance of the main building where the magic heightened.

It was an Alice in Wonderland experience and I questioned if it were real.

Casa Malca comes with an interesting provenance: it was formerly one of the holiday homes of the Colombian drug lord and narco-terrorist, Pablo Escobar who operated the biggest drug cartel in the world. His reign of terror lasted ten years and during this time he became the most powerful and most feared man in Colombia. 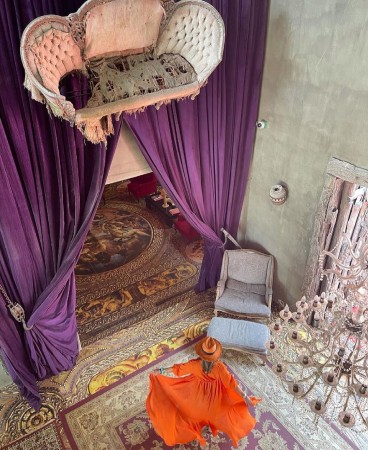 His main focus was dealing in heroin and he was the principal smuggler of heroin into the United States. Escobar’s business generated untold amounts of cash, some of which were invested in international real estate. His estimated worth in 1993 when he was gunned down and killed, was $30 Billion dollars, but it is rumored to have been much more.

When I was in Colombia about four years ago, following Pablo Escobar’s story, my guide said in passing that the Drug Lord owned a beachfront property on the ocean in Tulum and there were rumors that he used to visit it secretly arriving by helicopter and remaining incognito while he was there.

Never ever did I think I would get to see it. Sure enough, four years later when I was in Tulum, I visited Casa Malca, the former home of Pablo Escobar which is now a beautiful art-filled hotel developed by Lio Malca, an international art dealer. No one seems to know the exact story of how Lio Malca gained possession of this jewel in the Yucatan province.

The story I was told was that Lio Malca fell in love with this property. It was horribly neglected and in probate and  Mexican Law made it very difficult to unravel the details. But with patience and good lawyering, Malca succeeded and became the proud owner after Pablo Escobar.

Entering The Casa, I walked over handmade Persian rugs, thrown casually over the stone floor entrance. On either side, a floor to rooftop curtain was attached and on closer inspection, I became aware that the curtain was made of old wedding dresses, joined together – yes, two entire drapes of wedding dresses that formed a curtain.

To add to the fantasy, chairs were suspended in the air on chains. The building was three floors high, with an entire wall covered in strips of bark that encased the front door.

This was beyond anyone’s imagination, except perhaps the owner, Lio Malca, a New York City Gallerist and Art Dealer who created the interiors and produced the art program that is so essential to the design, using artwork from his own personal collection.

The door was slightly open, and I went inside.  “Inside” revealed a cube of space to match the outside height of the building, with a skylight at the top to let in the natural light.  Rich purple velvet curtains were hung from the top and against this a three-seater antique sofa was suspended high up in the air.

The walls had original artwork and there was a quirky KAWS sculpture as if to greet the guests when they arrived.  Yes, I was Alice in Wonderland because this was not real, it was magical.

History of The Casa.

The house that is now a hotel, was purchased by Lio Malca when he was searching for a holiday home in Tulum and “rescued” it from nearly twenty years of being abandoned and exposed to the ravages of the jungle climate.

Using local craftsmen and local materials, the original home was totally refurbished and renovated to be Mr. Malca’s own private, personal holiday home. When it came to the furnishings, the fabrics used were pesticide-free organic cotton and rayon made from Bamboo. There were eight bedrooms en-suite, and soon enough there was a steady stream of friends and business associates coming to enjoy his hospitality in Tulum.

The bedrooms, with polished concrete floors and hand-made Oriental rugs scattered on the floor, feature floor-to-ceiling velvet drapes in shades of chartreuse and royal blue. The beds are made up of the finest Egyptian cotton bed linens and each one has its own original art collection. Large windows capture the views, which are either ocean or jungle, and hammocks for relaxing are everywhere.

The ultimate room is “the Malca Suite” with a rooftop terrace and spectacular views. Service is flawless and friendly. No room service, but there is bottled water and a Nespresso coffee machine in each room.

Having successfully completed the first refurbishment, Mr. Malca decided to turn his home into an eco-friendly sustainable boutique hotel. The original home became the main building of the new hotel with the eight bedrooms en-suite, the reception area, restaurants and bar. Altogether with additions, there are now a total of forty-one rooms, that have spilled over into new buildings that were added on and correspond with the original architecture.

The ambiance of the hotel feels like one is visiting someone’s private home, a little eccentric, decorated with casual abandon, but at the same time, it is a style of decoration that is bold and original, using neon colors in the furnishings.

Integrated into the design is a selection of artwork from Lio Malca’s private collection, displayed both inside and in the surrounding “jungle.” It has the effect of a living breathing gallery. The artwork required careful selection because of the climate and only specific artwork could withstand the heat and humidity.  The “Gallery” is also rotated regularly, so that if you return you are likely to see different artwork.

There are three restaurants:

THE BAR cocooned in wallpaper imprinted with Keith Haring’s iconic black and white figures is both quirky and surprising.

There are two swimming pools, one is outdoors with a view of the ocean and the second one indoors immediately underneath.

This is the Caribbean coastline and Casa Malca has a 600’ frontage of private beach, with powdery white sand, aquamarine water, and frothy white waves lapping the beach.

This quote found on the Casa Malca Website sums it up best of all:

“WE ARE ALL ABOUT THE EXPERIENCE. CASA MALCA IS FAR MORE THAN JUST GETTING AWAY FROM  IT  ALL. IT IS ABOUT RECONNECTING WITH YOUR SENSES.”