Heath ceramics: timeless, classic, enduring, impeccably crafted. As “in style” today as they were in 1948 when Brian Heath designed the original foot pedal-powered potter’s wheel from a repurposed sewing machine. His wife, Edith, used the new device to craft her first individual items of ceramic art which she then fired in an at-home kiln, also built by Brian. Within a few years, she was producing 100,000 pieces of ceramics a year — naturally, not in her kitchen but in a Sausalito studio. 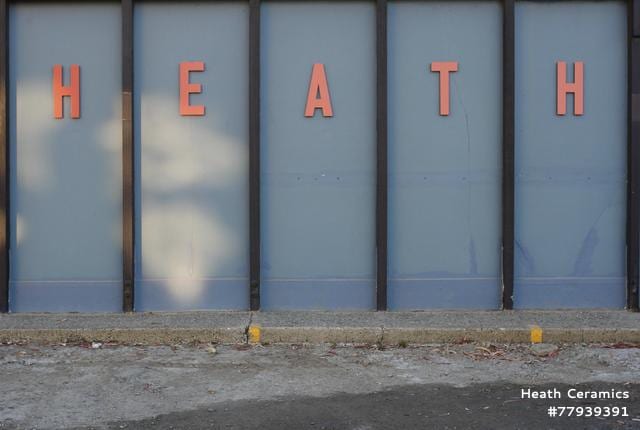 The present factory has been located at 400  Gate 5 Road in the industrial area of Marinship,  Sausalito,  a few blocks away from the bustling energy of the main thoroughfare of Bridgeway. A low-slung Mid-Century Modern building, it was opened in 1959 and continues to produce Edith Heath’s classic Mid-Century dinnerware, made from California clay. It’s a homespun brand that is known and revered throughout the United States, built on the creative genius of Edith Heath, an iconoclastic, self-taught, determined, and extremely talented Mid-Century ceramics designer. 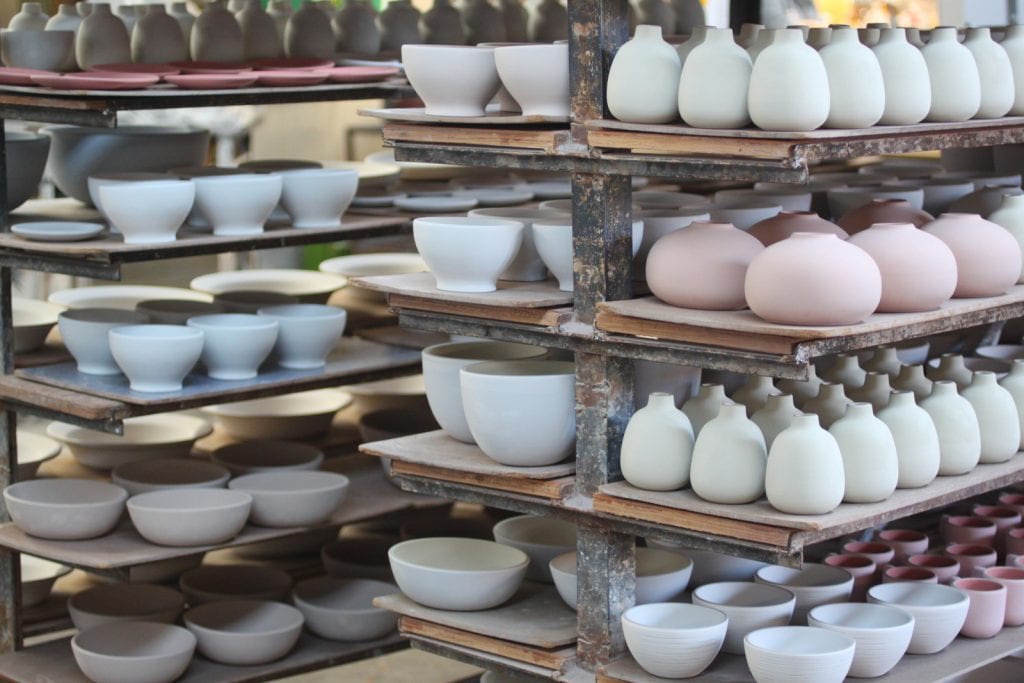 Brian and Edith purchased land for this new factory after outgrowing the original studio space.  Edith was very hands-on in the design and wanted to make sure the workflow organization was efficient. Working extensively with Mid -Century architects Marquis and Stoller, their personal friends, they created a floor plan resembling a doughnut with a hole in the center — the “hole” is a central atrium with good natural light and ventilation. The workflow takes place around this space.  Moving in one direction, it is assisted by dollies, laden with the unfired product —  because items can be handled up to sixteen times before they are ultimately fired and removed from the kiln. 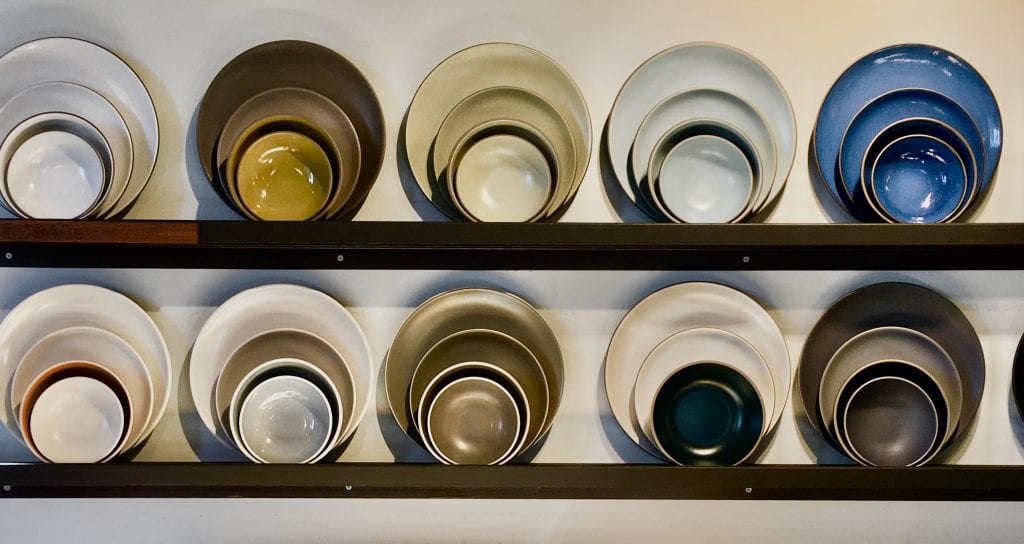 Edith was highly creative, with a determined, obstinate personality to match. She was stubborn and pushed the boundaries of her craft.  It was her way or no way. The pride was justified: she was constantly studying molecular chemistry and her expertise in clay led to a keen understanding of the interaction between the clay and the glaze. And although much of the credit for Heath Ceramics has gone to Edith, there would have been no company without her husband, Brian. In addition to creating her foot-powered wheel, he also led the business side of the operation, leaving Edith total freedom of her time to create. Brian was also responsible for the machinery in the factory and designed most of it, as and when it was required. Both were strong personalities and the relationship could at times be combustible. 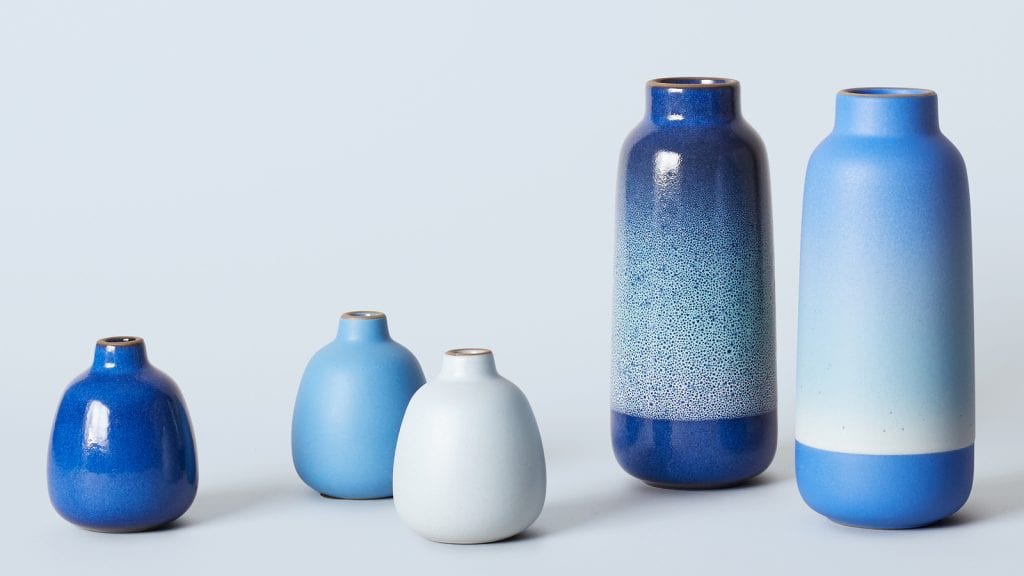 Edith had access to readymade clays but was not satisfied with the composition of any of those available at the time. She was looking for a clay that had a unique quality, so she and Brian went searching every weekend for California clay with the right texture. They eventually found it in Lincoln, California. When the clay would arrive at the factory, it was blended with other clays, mixed with water, and then drained, yielding the correct consistency to create dinnerware of stoneware quality. 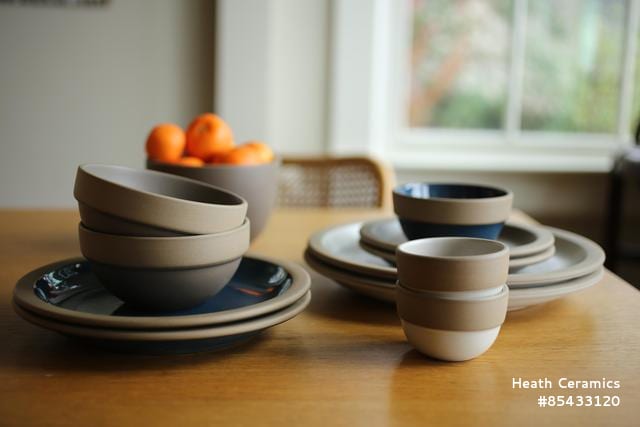 The composition of the clay used in the factory was of prime importance in creating stoneware, a tough, chip-proof ceramic that can withstand heavy-duty wear. It is fired one-time-only, at lower temperatures, leading to a careful and precise manufacturing process that is also quite sustainable. To this day, Heath Ceramics recycles all unused clay, given the effort that goes into making it. They even collect overspray on glazes, that can be reapplied on other dishes. 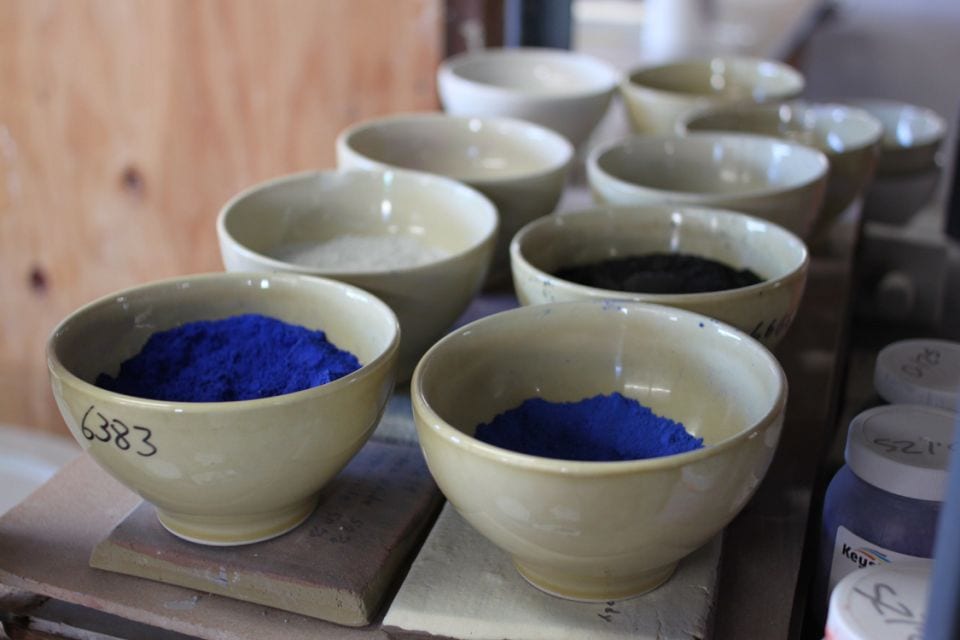 Everything produced at Heath  Ceramics is handmade and all the glazes are custom mixed. Being handmade, there are always variations, and variation also occurs in the glazes. It is this inconsistency and earthy quality that adds another layer of beauty to these products. 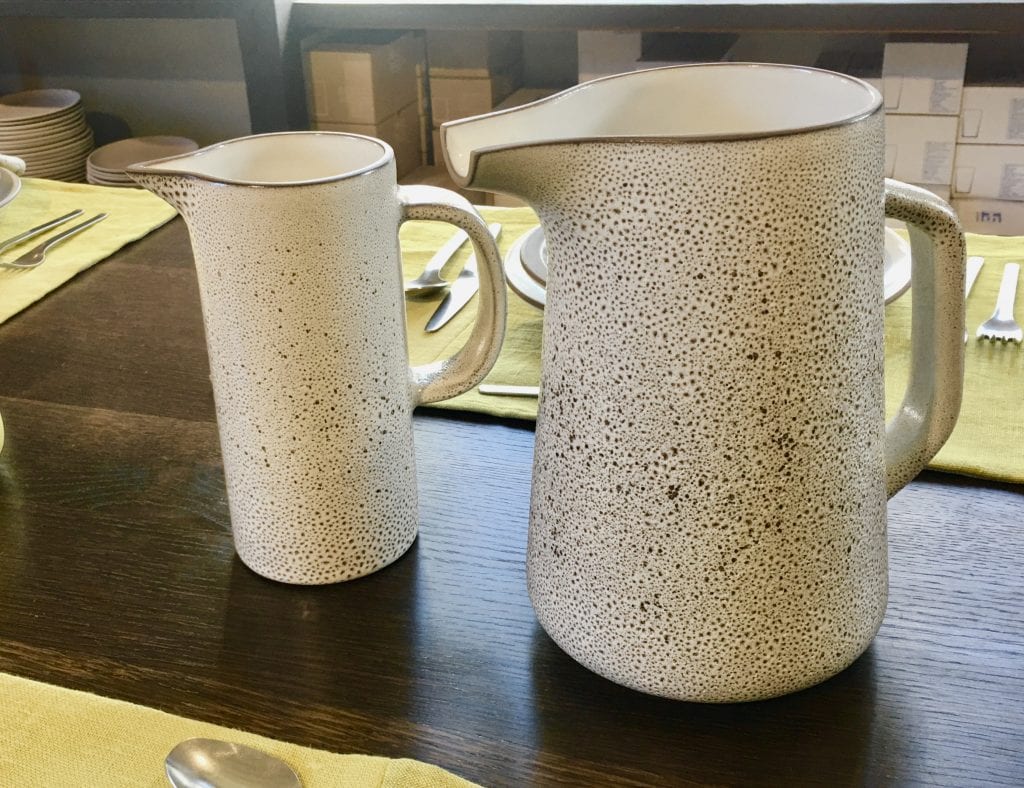 The new factory operated continuously from 1959 until 1993. With Brian and Edith getting older,  they were less and less in the factory; sadly, Brian passed away in 2001.  By this time, Edith was in her nineties and in failing health. She handed the business over to a relative to manage, and it ended up in a trust.  At the time, with the absence of Edith and Brian in the factory, there was a fear that Heath Ceramics had run its course and was about to disappear.

But happily, in  2003, the business was saved by two industrial designers, Robin Petrovic and Catherine Bailey, who had recently moved to Sausalito from San Francisco. Becoming acquainted with their new neighborhood, they came upon this funky little ceramic factory and looking at the product,  immediately felt a connection. Finding out the company was for sale, they wasted no time and within three months, with Edith Heath’s blessing, acquired ownership of Heath Ceramics. Fortunately, the loyal staff were still in place and were able to continue producing the same Edith Heath designs under the new ownership.  As co-owners, Petrovic is managing the business side of the company and Bailey is now in charge of the creative side.

The designers and other personnel had remained loyal to the company during its downhill slide and the new owners got to work immediately shoring up the damage and rewarding their faithfulness.  It was important to keep the production going and in the early years, they continued to produce all the old designs and the original glazes,  the same as they had been during Edith Heath’s ownership. 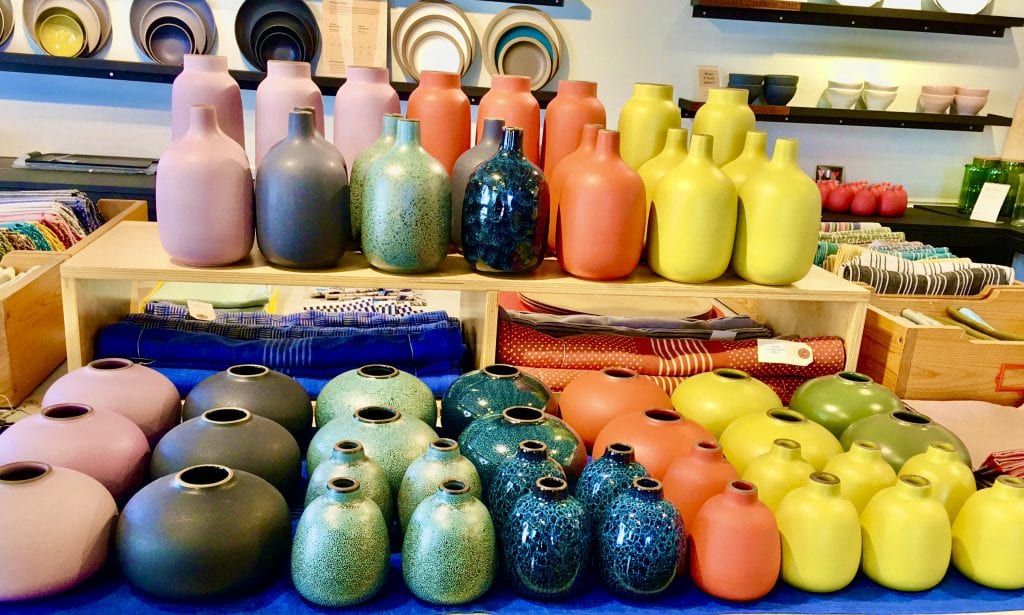 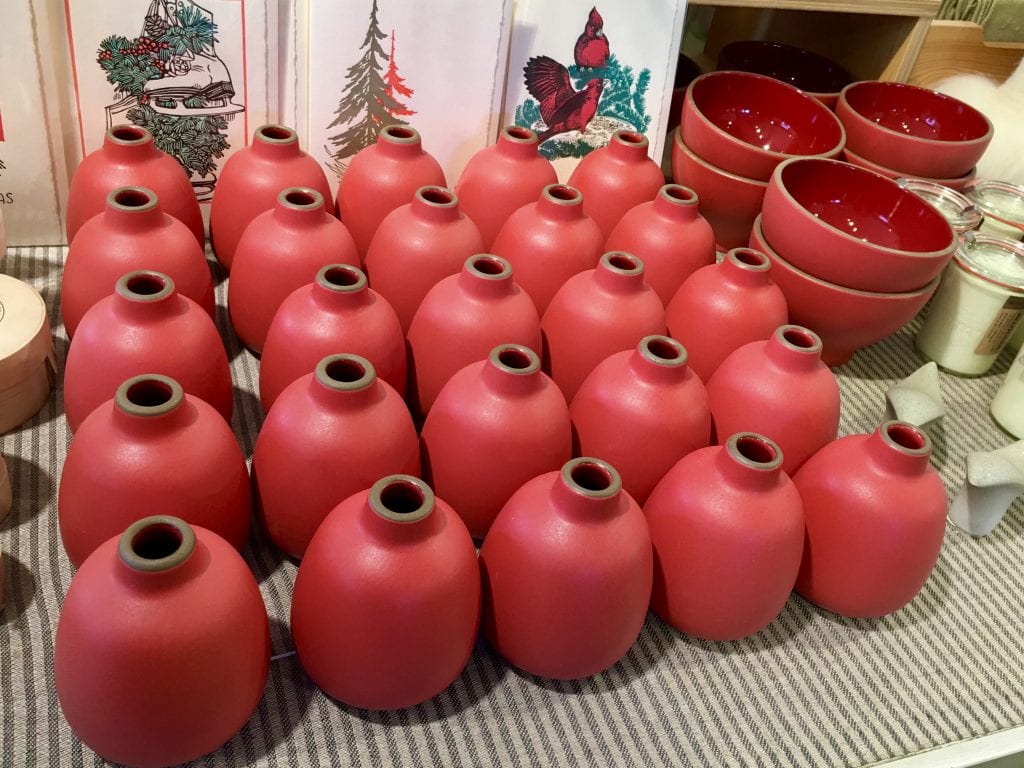 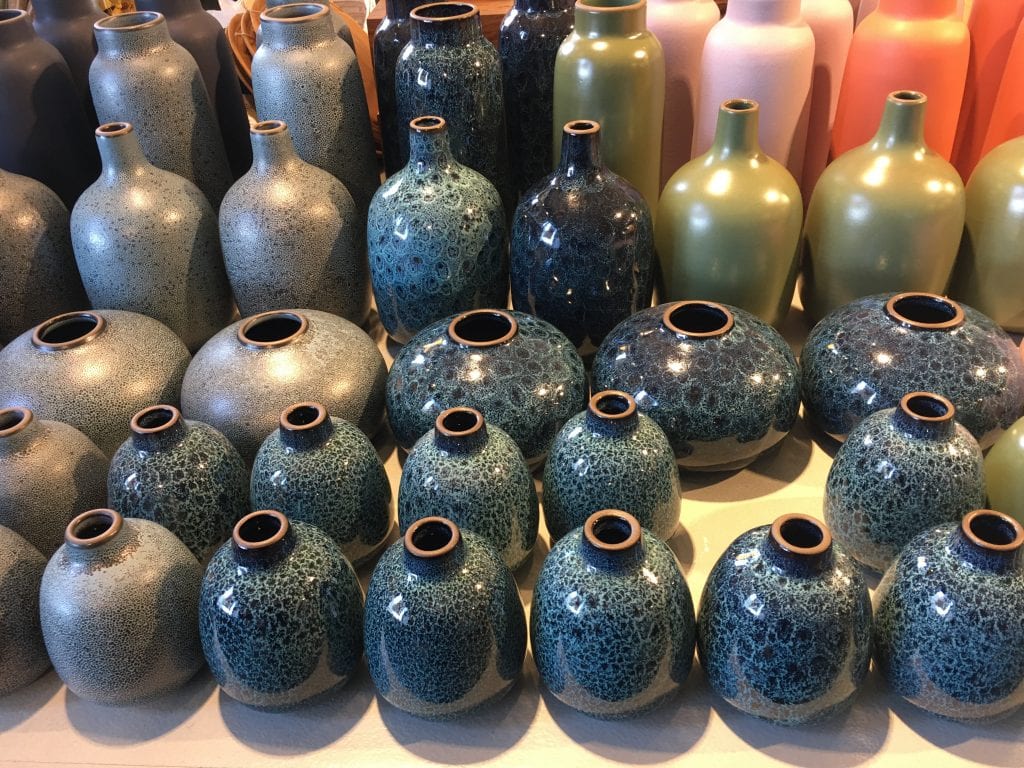 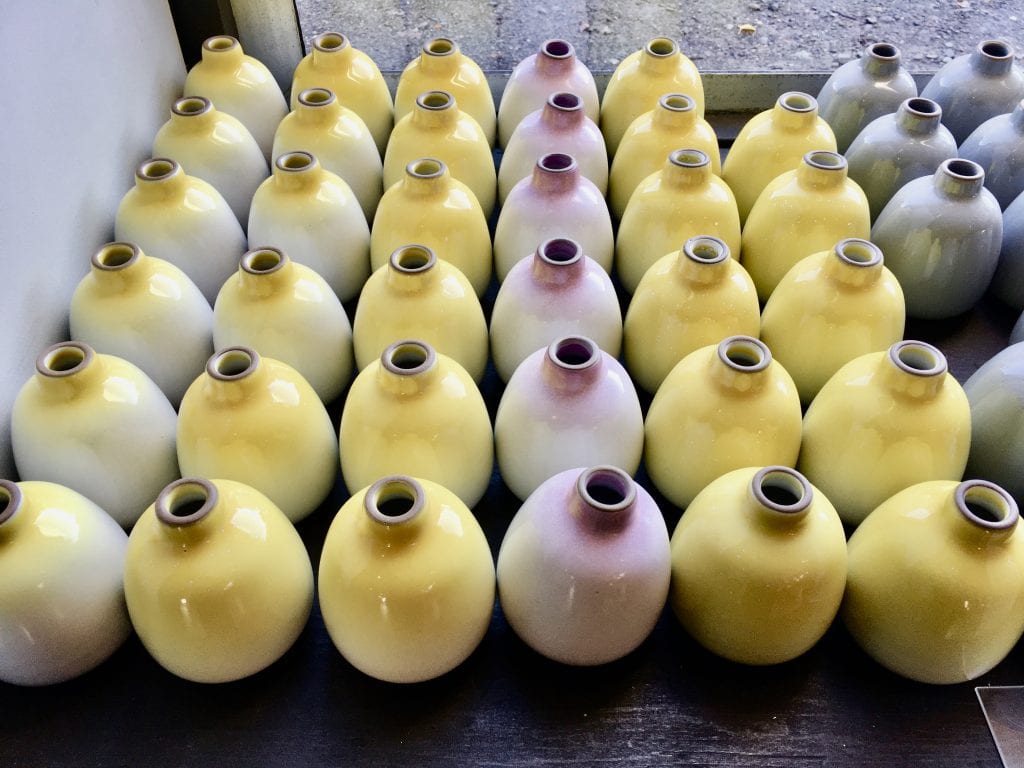 All the above photos: Phyl Doppelt.

Robin Petrovic and Catherin Bailey have worked diligently since not only to bring the production back to life but also imbue it with new vitality. Rather than make radical changes, they have worked steadily to rebuild this historic brand, even improving on what it had been.  It was important to them to keep the best of the Heath designs, which had stood the test of time. Initially, they introduced only one item, a large size coffee mug for the coffee aficionados across the Bay. Since then, they’ve gradually introduced new items and more colorful glazes, in keeping with the times.  More recent colors include French Grey, Persimmon, Mist, and a warm yellow. 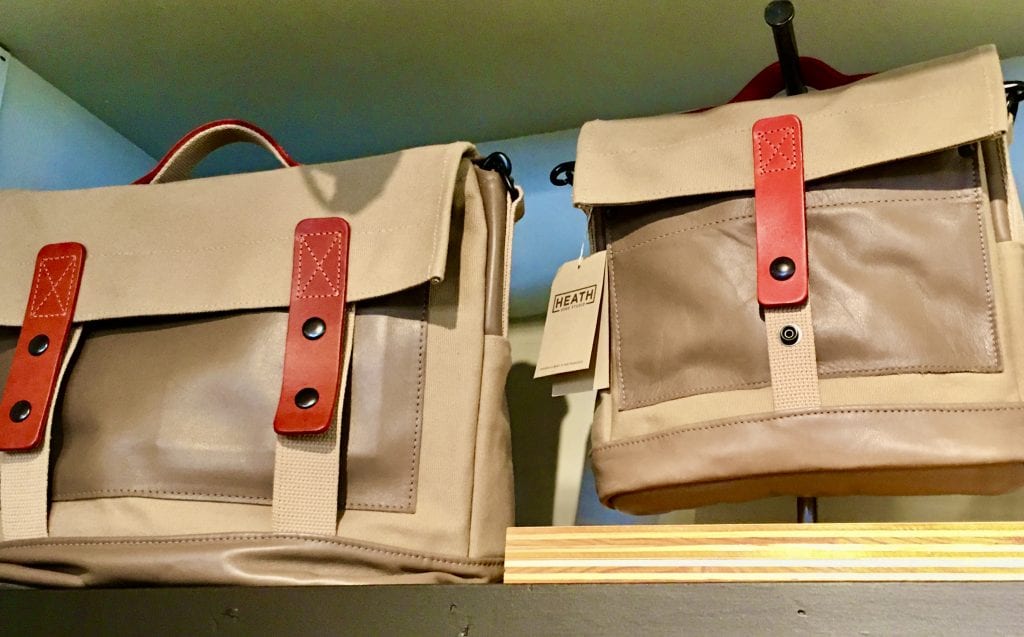 They have also collaborated with other manufacturers of complementary items, such as high-end chef’s knives from David Mellor of London, a selection of cheese and charcuterie boards,  kitchen towels, and napkins, placemats, and a line of tote bags that they manufacture themselves. 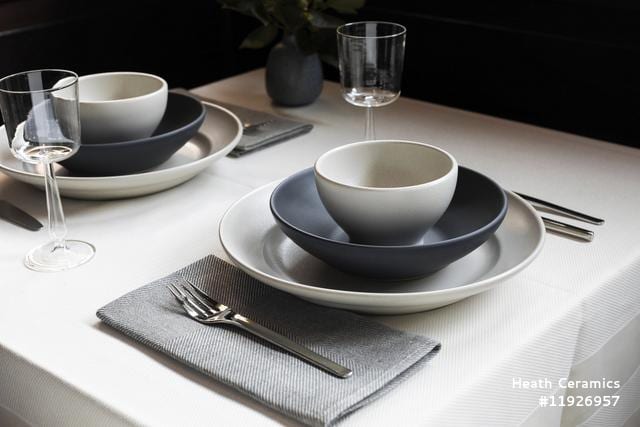 Feeling the need to have flatware that was compatible with the dinnerware, Petrovic and Bailey worked with Sherrill manufacturing, the last remaining flatware manufacturer in the US,  to design Heath Flatware to go with the original “Coupe” design dinnerware (although it blends well with all the dinnerware designs).  Having their own flatware enhances the table settings that are displayed throughout the showroom, too. And speaking of the showroom display, it is well-curated, uncluttered, and color-coordinated  —  Scandinavian in the way it is presented. 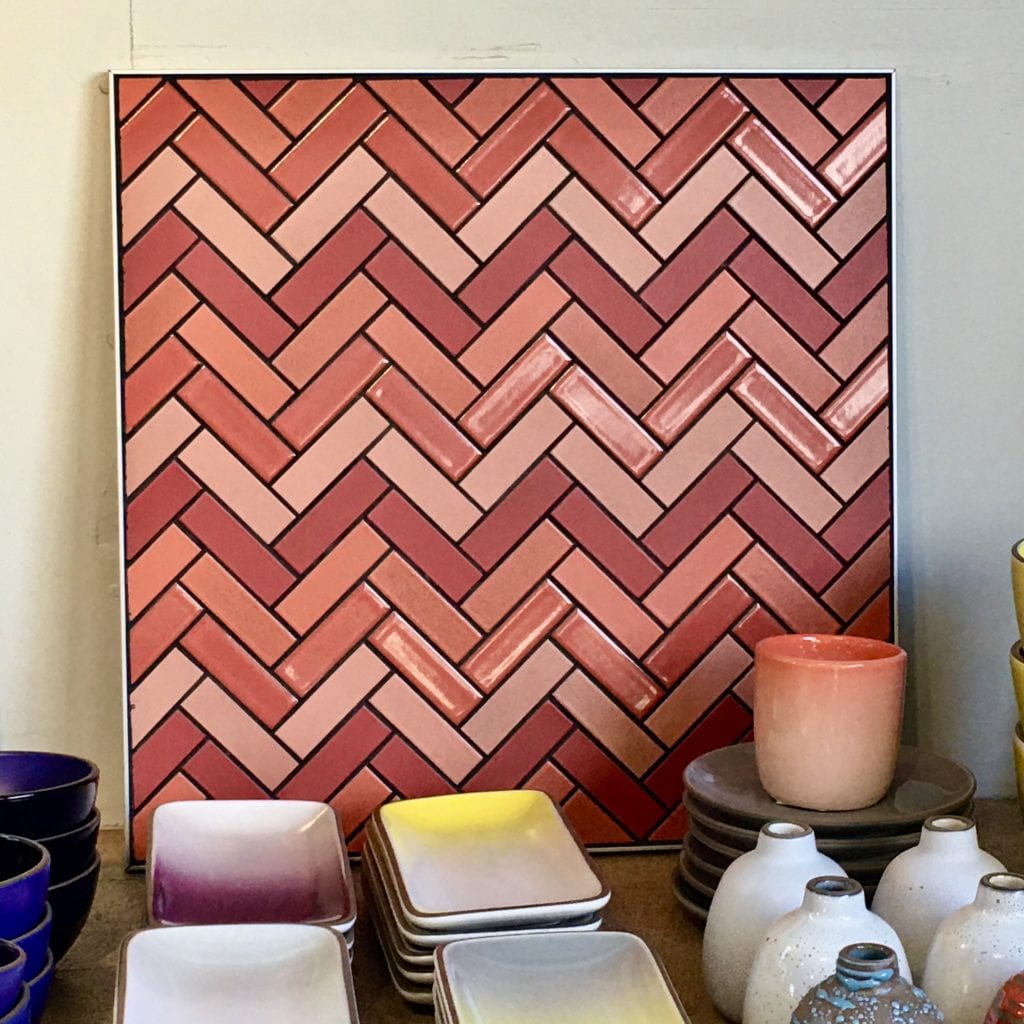 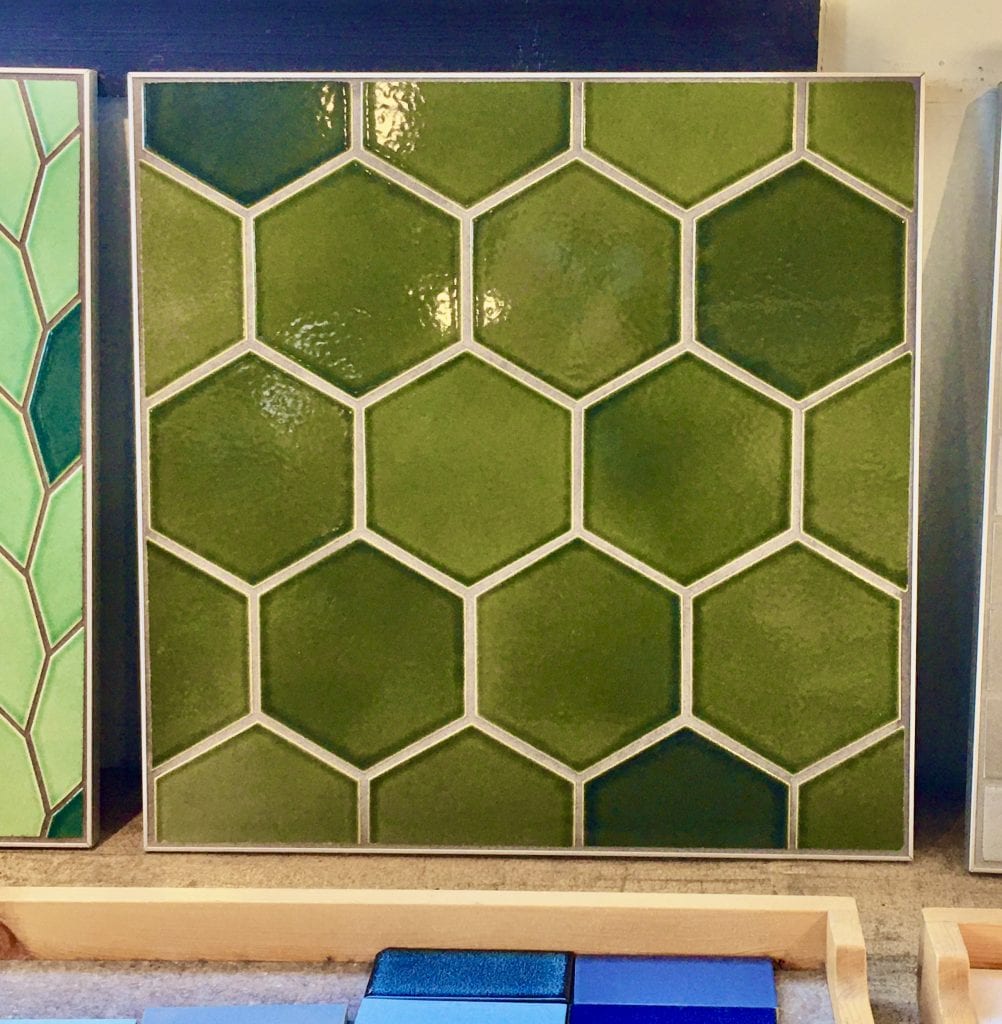 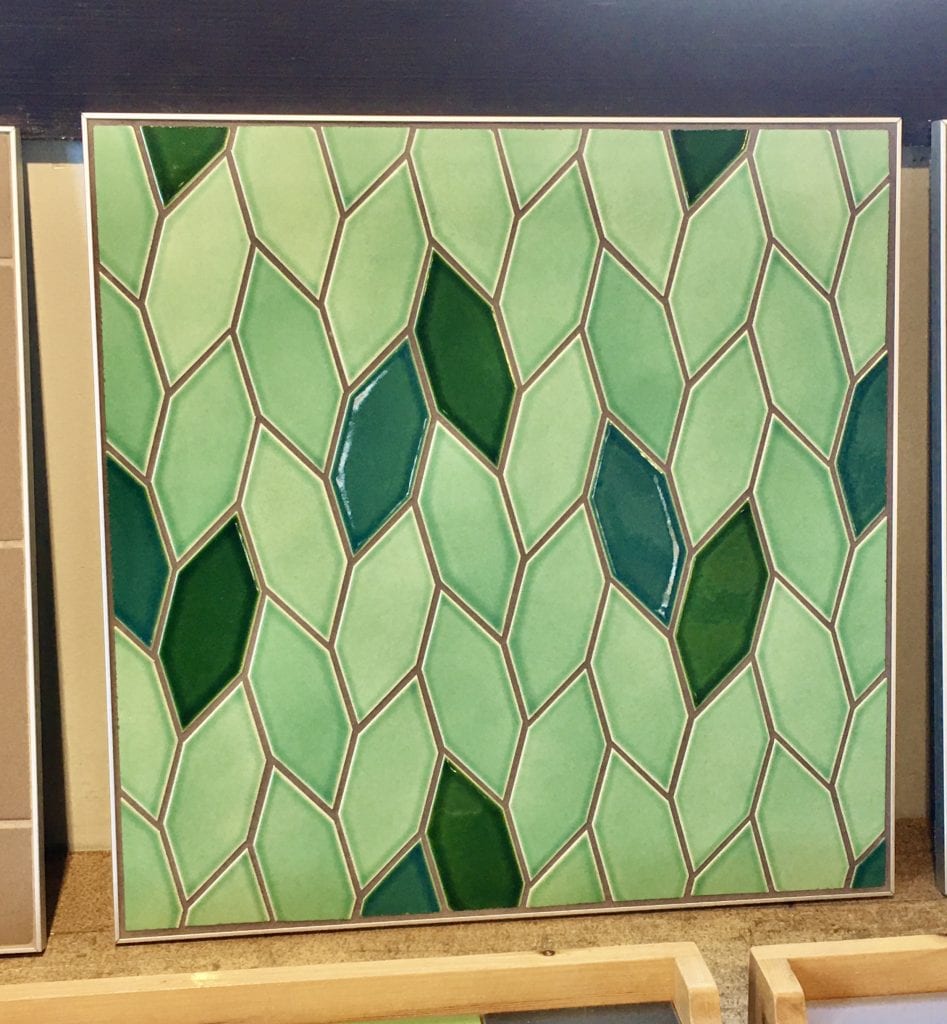 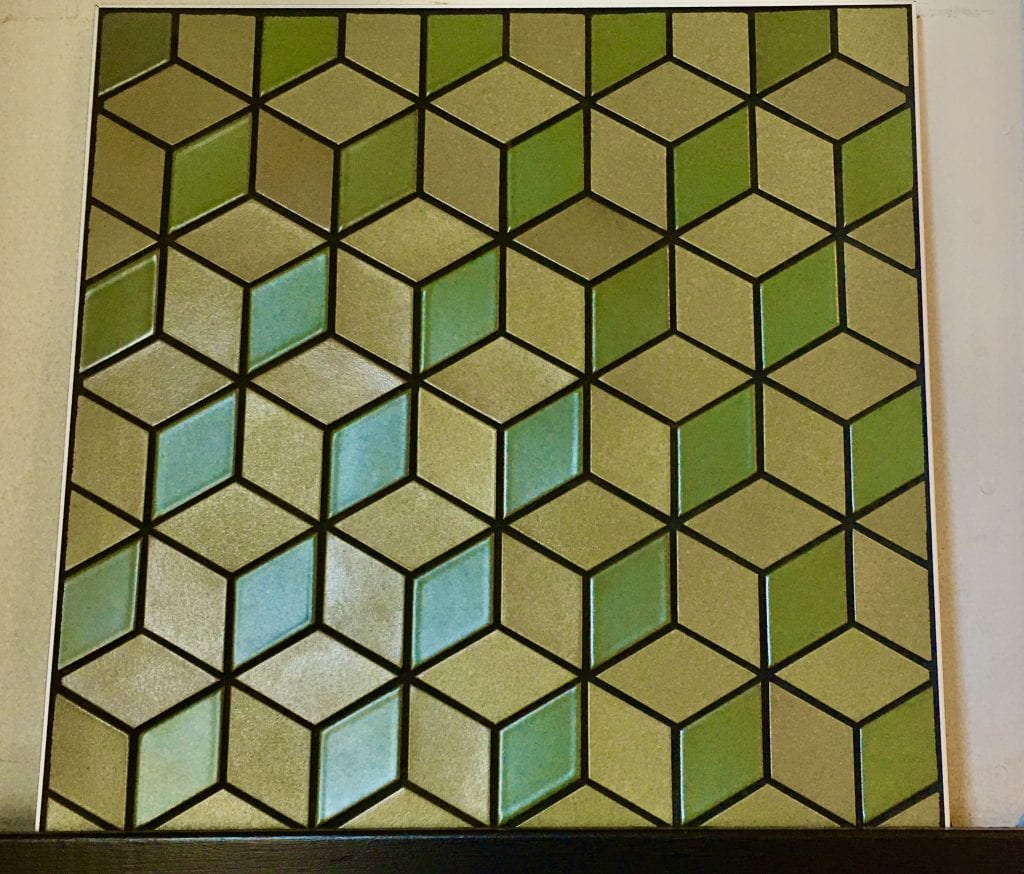 All the above photos by Phyl Doppelt,.

Many are surprised to know that tiles had also been manufactured in the Sausalito factory, but as the company grew, Heath Ceramics opened a second factory in the Mission district of San Francisco in 2012. There, they took over a previous commercial laundry space of 60,000 square feet to increase tile production. The tiles are all unique, featuring geometric designs that gracefully incorporate the colors of the glazes used on the dinnerware. They are architectural and extremely attractive, unlike anything else available on the tile market.

Throughout its history, Heath Ceramics has been associated with some noteworthy clients. 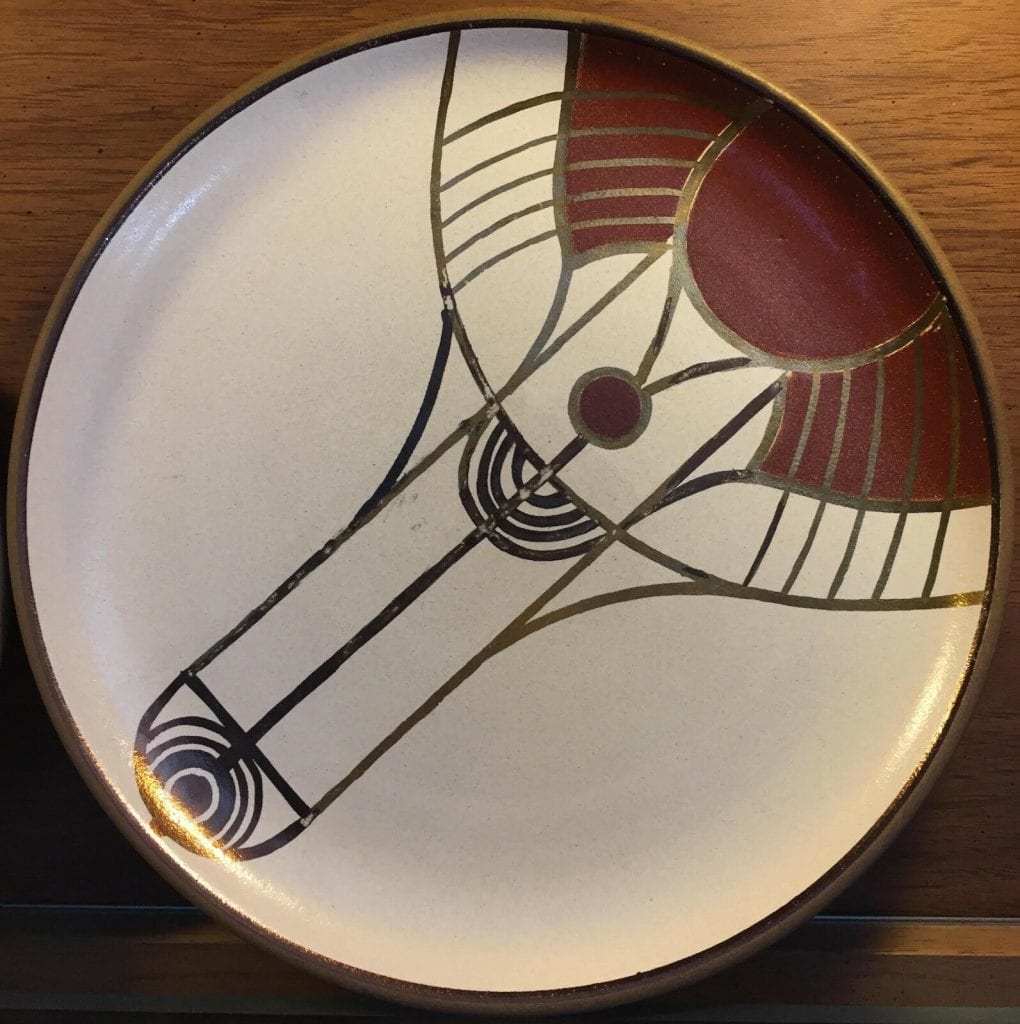 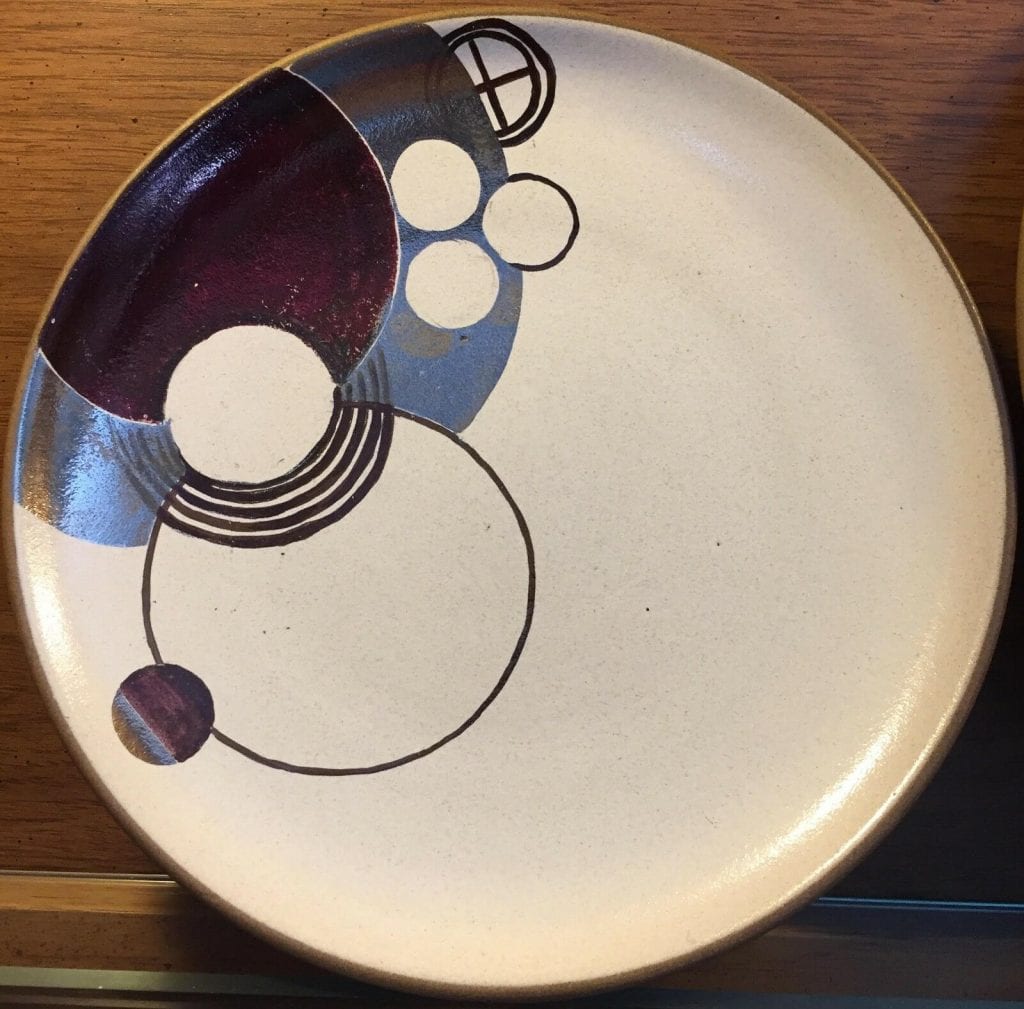 The plates above were ordered by Frank Lloyd Wright, the renowned “Prairie Style” architect, who specified custom-designed, hand-painted Heath ceramic dinnerware for some of his upscale clients. 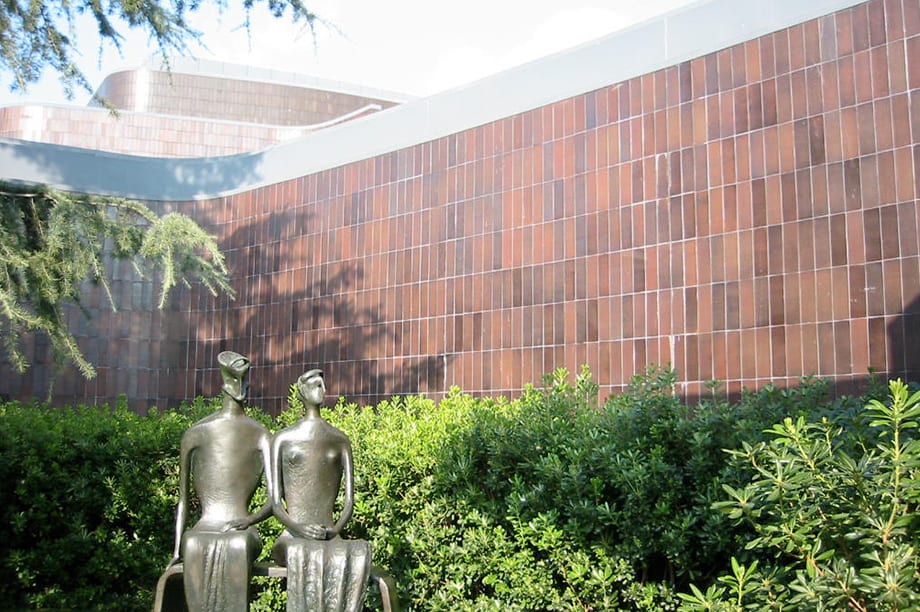 And in 1969, Philip Johnson. the first Pritzker-awarded architect approached Edith Heath on behalf of the architects Thornton Ladd and John Kelsey, who were designing the new 85,000  square foot addition to the Norton Simon Museum in Pasadena, about creating tiles that were to clad the exterior walls. This was a hugely prestigious project. She agreed and submitted a sample glaze of red brick over onyx, creating a burnt, umber volcanic effect when fired.

Legend has it that she was asked to change the color of the glaze, but Edith in her usual stubborn way refused.  Finally, her critics acquiesced and she got her choice to use the original glaze. An order was placed for 115,000 tiles, size 5 x 15, which was larger than the average tile and better suited to the scale of the project. Once installed, everyone was of course delighted. The volcanic glaze, uneven in texture and color adds richness to the design and echoes the colors of the Pasadena mountains that form the backdrop.

In 1971, Edith Heath was awarded the  AIA Industrial Arts Medal  Award from the American Institute of Architects, the first non-architect to receive this award. 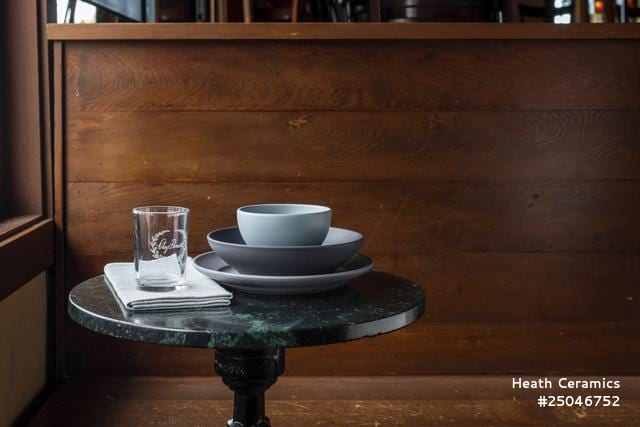 In 2006, Alice Waters, the first female chef to win the James Beard Award, chose to use Heath Ceramic dinnerware for Chez Panisse, her world-famous, Art Deco-themed restaurant in Berkeley, California, and a special design was created for her by the artisans at Heath. Among her many accolades is the fact that the now-ubiquitous”Farm to Table”  movement is attributed to Alice Waters, a movement literally bourn out on Heath Ceramics. 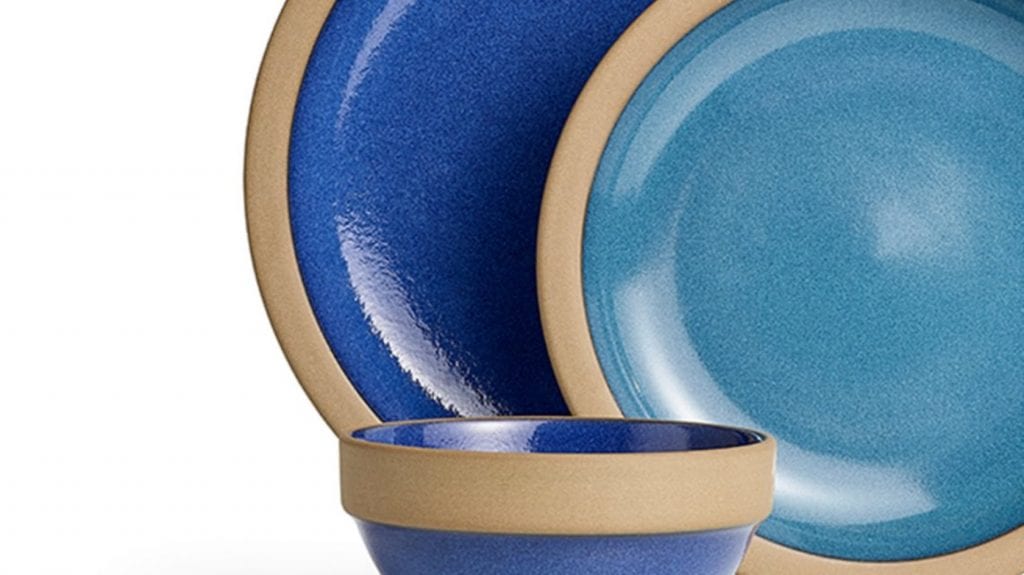 And finally, when Chad Robertson, world-famous and innovative San Francisco Bread Baker opened Tartine Manufactory in the Mission District in San Francisco in 2016, he selected dinnerware from Heath Ceramics. A unique new glaze was mixed for his dinnerware, now known as Tartine Teal. The dinnerware receives heavy-duty wear daily; but being stoneware quality, it is virtually chip-proof. 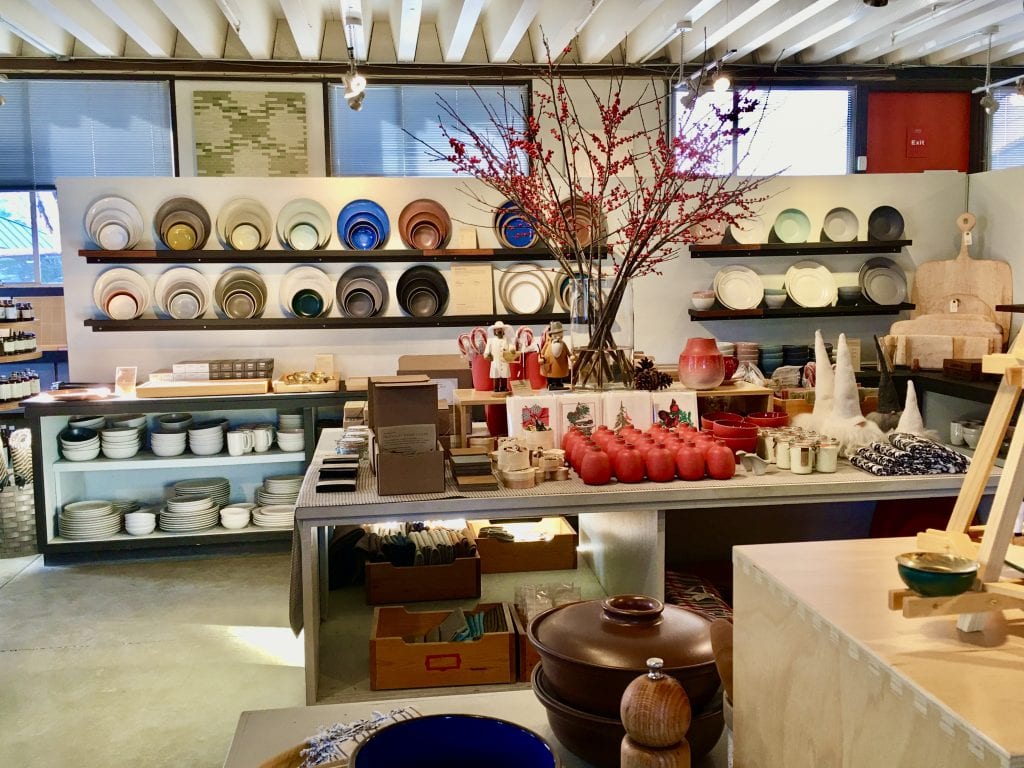 “In California since 1948, designing, making, and selling goods of timeless design and uncompromising integrity  —  made thoughtfully, honestly, and with pride– to be enjoyed with similar intention.”

2 thoughts on “HEATH CERAMICS, a Mid-Century Treasure, in Sausalito, California.”