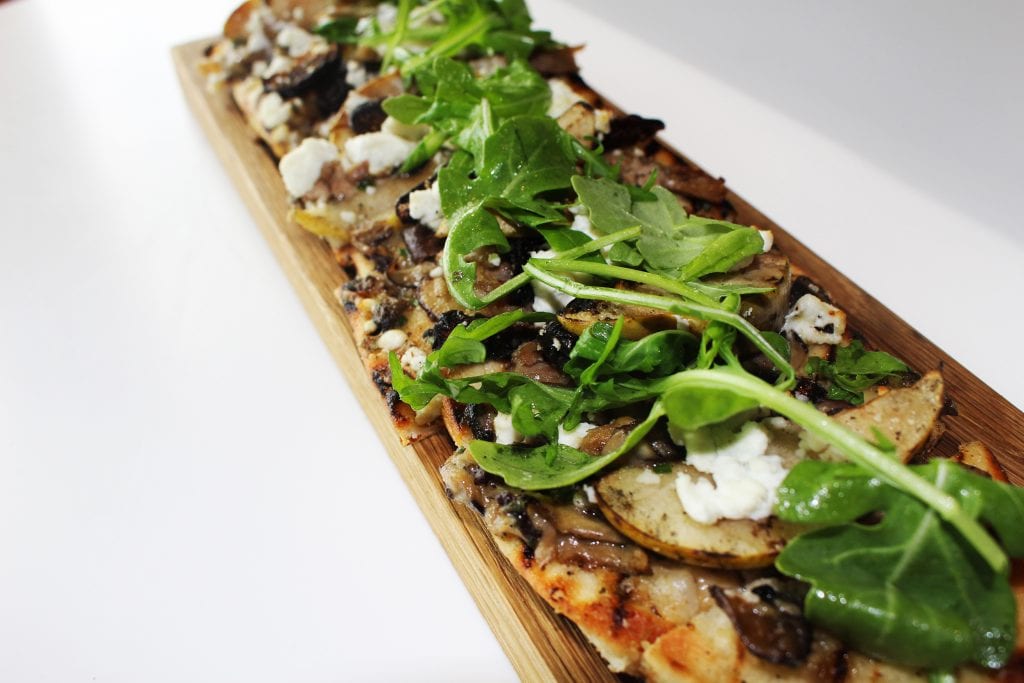 Flatbread, piping hot as it comes out of the wood-burning pizza oven, layered with duck confit, topped with fresh, organic arugula salad, and drizzled with a golden honey glaze. Made from in-house yeast dough, it is not too thick and not too thin – just perfectly rolled and ready for its toppings as it emerges from the flames. This is one of the signature dishes being prepared at the FireLake Grill  at the Radisson Blu Hotel in Bloomington, Minnesota. 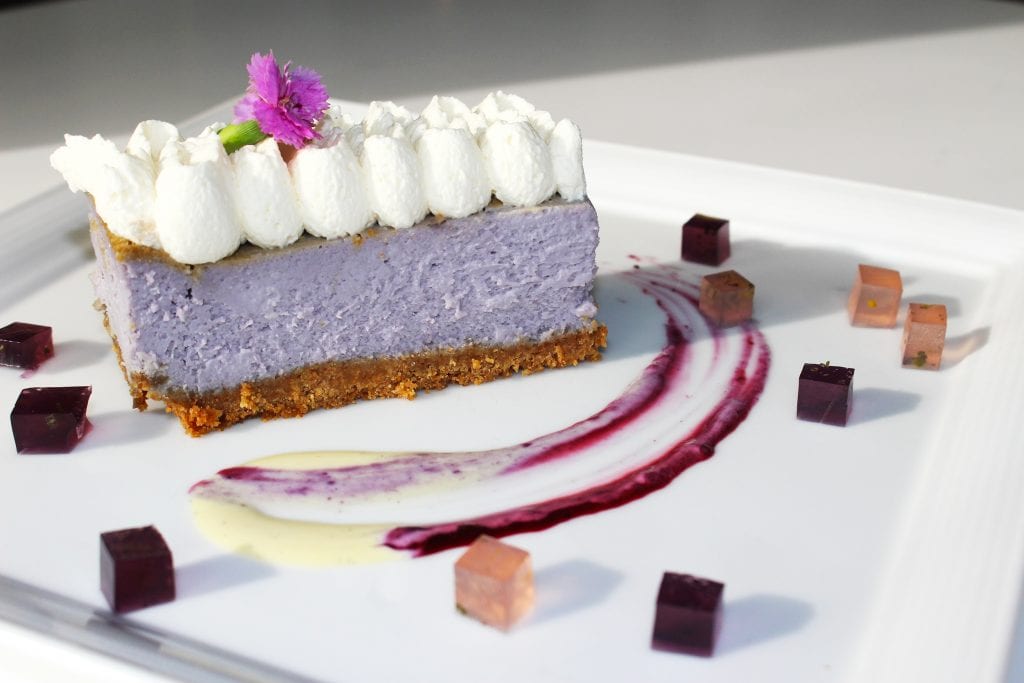 Another of the special plates, honey lavender cheesecake: light as a feather, infused with lavender and honey, creating a perfect balance of flavors and a delicate earthiness.

These plates are being thought up by the brilliant food and beverage team at the Radisson Blu Hotel in Minnesota, a thirteen-floor hotel whose 500 rooms are attached by skyway to the Mall of the Americas, the largest shopping center in the USA: pre-pandemic, it welcomed 40 million guests a year.

General Manager Taylor Shaver and Executive Chef Dinesh Jayawardena are the primary creative forces behind the innovative food and beverage program in the FireLake Grill and Bar, which incorporates local ingredients and products in every possible way. Supporting local farmers, dairies, growers, and artisans is part of their secret recipe: they use the freshest and pesticide/hormone-free ingredients. The result is the healthiest, tastiest menu possible and a win-win-win for customers, creators, and local artisans. 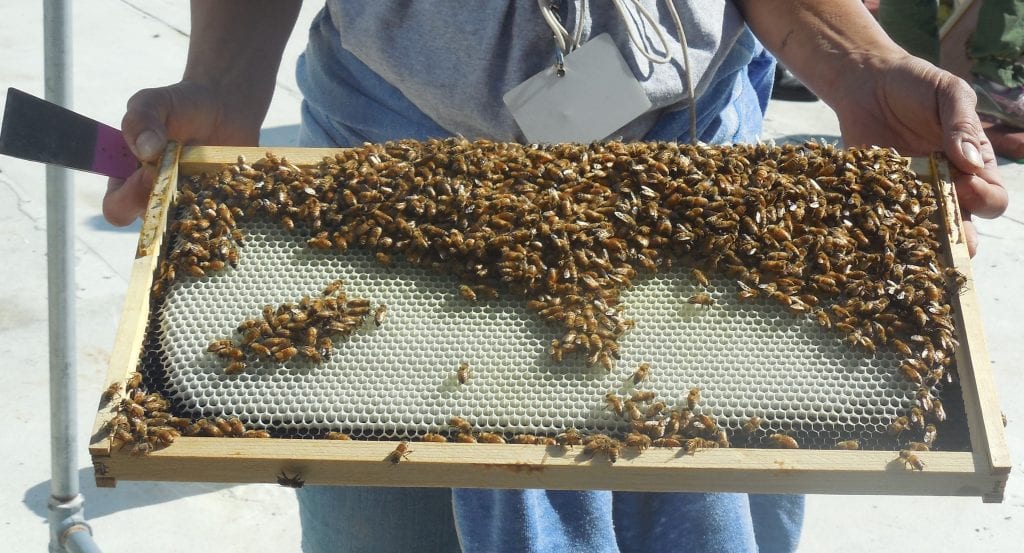 One other thing these two dishes have in common is honey, made by bees that live atop the thirteenth floor, giving life and purpose to another otherwise desolate urban rooftop.

The idea of having bees on the roof of a hotel is becoming more prevalent around the world.  In the case of the Radisson Blu, one of the first hotels to introduce bees, it is part of a bee research program being carried out by the University of Minnesota Bee Squad. The team oversees a Bee Network comprising a number of participating properties, encouraging beehives across the Twin Cities. Gathering data from the beehives, they are able to monitor bee health and conservation across the region and explore whether urban apiaries are Eco-possibility. The Radisson began with two hives and ten thousand bees in 2015; whether through reproduction or new membership attracted by the few, the population now numbers many thousands.

While harvesting the honey for the Firelake Restaurant and Bar is a “sweet” bonus, the main purpose of installing beehives on the hotel rooftop is to highlight the importance of pollination and the threats the bee colonies face as a result of insecticides, pollutants in the air, and global warming. 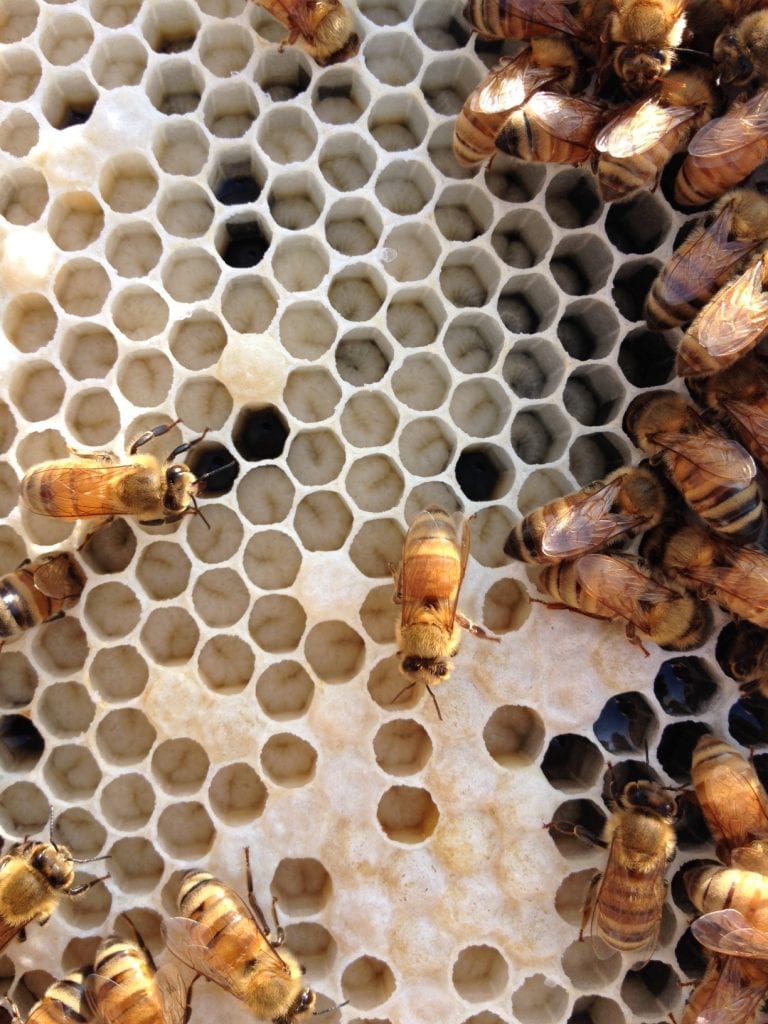 The location of the hotel, close to the Minnesota Wildlife Refuge, Lake Meadow Lake, and the banks of the Minnesota River allows the bees to collect pollen within a radius of three miles from the Radisson Blu, developing their own exclusive flavor of honey, related uniquely to the plants and flowers growing here. It’s a small and tasty micro-insight into a global problem.

In 2006, the world was alerted to the problem of diminishing beehives that could, in time threaten the global food chain. A sudden scourge began affecting beehives around the world and the bee industry in the US alone lost 30 percent of its hives. Worker bees were disappearing and failing to return to their hives, leaving the queen and nurse bees to take care of the larvae or baby bees. With no pollen coming in, the infrastructure of the hives broke down. This became known as Colony Collapse Syndrome and with pollination levels dropping randomly, there was an existential threat to the global food chain. Bees are at the top of the list of pollinators and are said to be responsible for pollinating about three quarters of the world’s flowering plants and 35 percent of the world’s food crops. 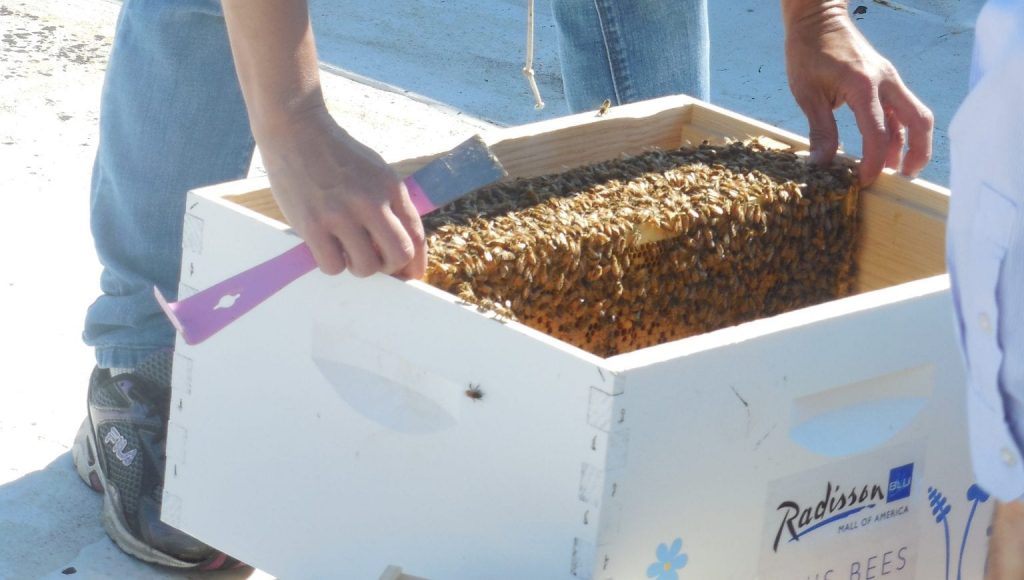 The prospect of a bee-less future lends gravitas to the research being done by the Bee Squad on the roof of the Radisson Blu. It’s not some charming little experiment, but rather a study generating intimate, scientific knowledge of what is going on inside these beehives and contributing important data towards improving pollination.

I was fortunate to be able to talk directly with General  Manager Taylor Shaver and  Executive Chef  Dinesh Jayawardena and in my opening conversation with Shaver, he makes it clear: “Sustainability!  We are at a crucial period worldwide. There is not a living thing that does not need pollination; we need to be more responsible stewards of our planet.” Shaver explained that before the first shovel of dirt was turned for the construction of the Radisson Blu in Minnesota, a sustainable plan was already in place for every facet of the hotel, with the intention being to have the highest LEED certification possible. 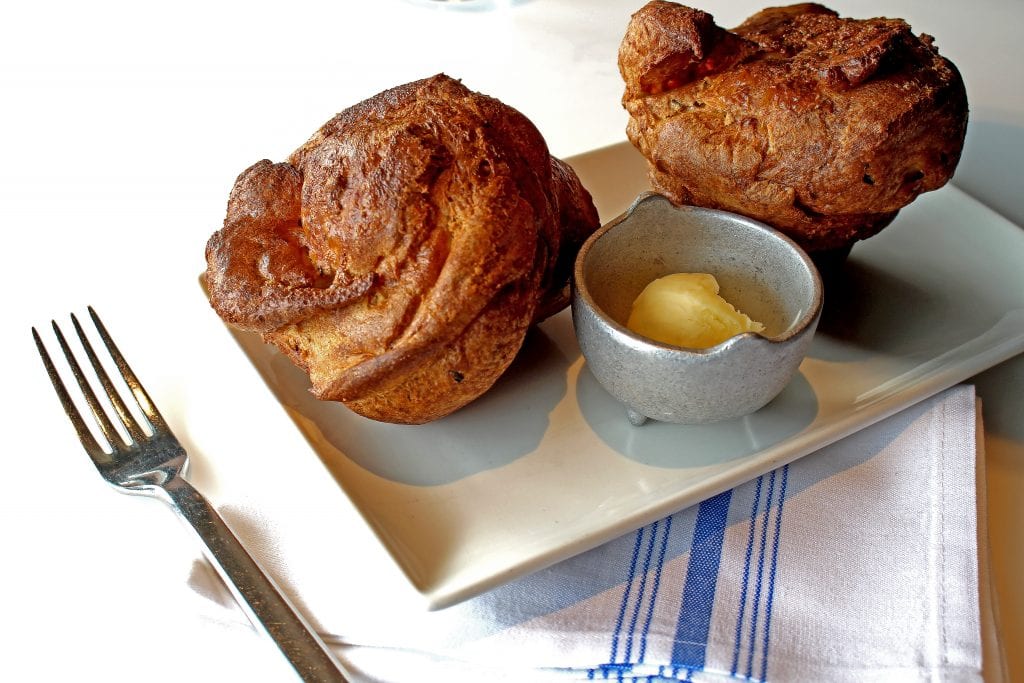 For Executive Chef Dinesh, there is an element of delight that comes with the mission-critical work of being so environmentally friendly.  Remembering his father and grandfather working with bees when he was a little boy in Sri Lanka where he grew up, and producing delicious honey, he saw an opportunity at the Radisson Blu that could generate both tasty dishes for guests as well as generate further press for the experiment. With encouragement from Taylor Shaver, who leads the team, he began incorporating honey into his recipes: the raspberry sauce served with the flourless chocolate cake, honey ice cream, balsamic honey glaze for roast meats, cherry chutney to accompany the curry, and honey butter for the popovers, just to mention a mouthwatering few. Every avenue they can, they use the rooftop honey: “it adds fun and balance to the recipes bringing out a more organic and fresh, earthy flavor”, says Jayawardena.

Radisson Hotels worldwide are at the forefront of sustainable design. At this time, more than 450 Radisson  Group Hotels have green labels (LEED Certification) and every hotel has a sustainability plan integrated into its architectural design to reduce the carbon footprint.  Hospitality worldwide is a powerful and growing industry that is expected to explode post-COVID (an era that will come) creating an enormous opportunity to incorporate sustainable practices into future hotel design.,

To quote from the Radisson policy:  “In addition to Radisson Hotel Group company-wide initiatives, we believe the travel and hospitality industry and other partners together can be a force for good. We participate in significant collaborative initiatives to help build a better planet for all.”

6 thoughts on “WHAT’S THE BUZZ…………on the rooftop of the Radisson Blu Hotel, in Bloomington, Minnesota?”