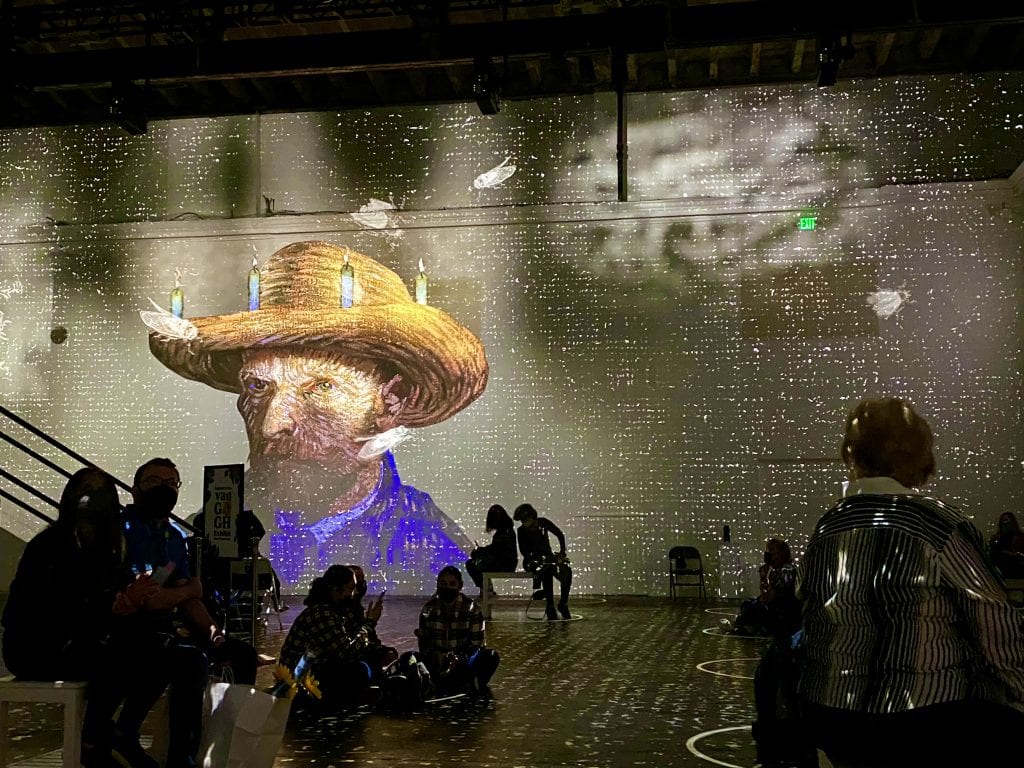 He sold barely a handful of paintings during his lifetime — a short 37 years —  and yet, 130 years after his death, hundreds of thousands of people, worldwide, are able to see his paintings, some learning his name, Vincent Van Gogh, for the first time. He is, of course, a Post Impressionist painter, and genius, who led a tortured life overshadowed by severe mental illness. 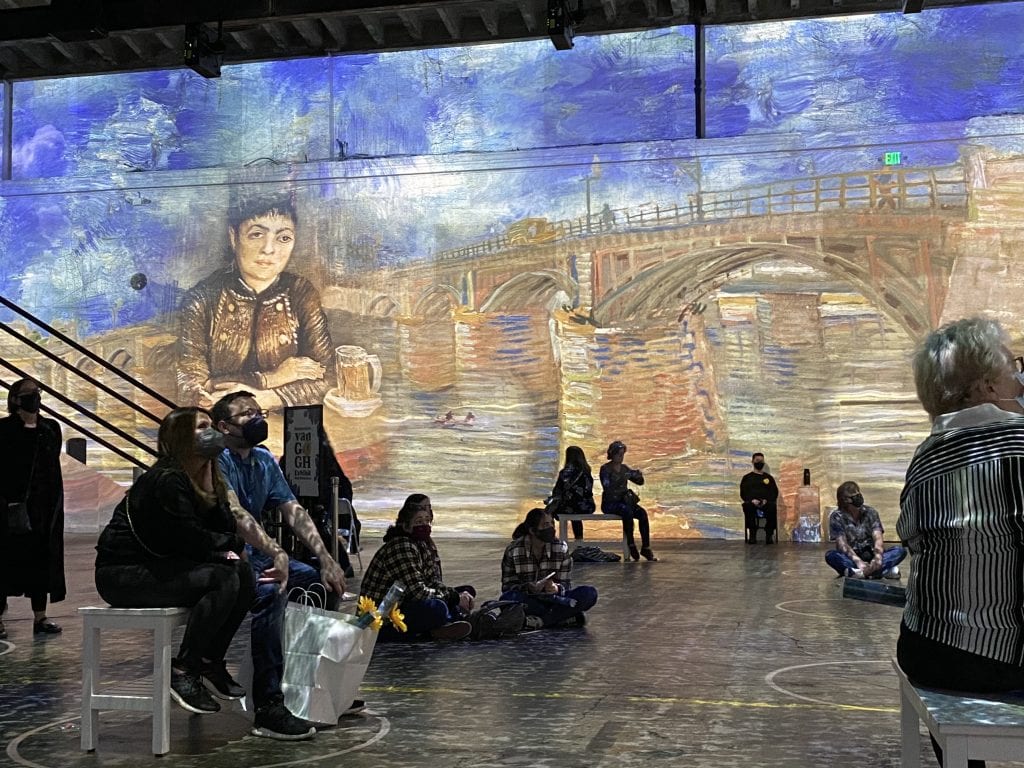 “A blockbuster digital experience that has taken the art world by storm” …..   Artnet.

The Van Gogh Immersive Exhibition opened originally in Paris in 2017 where it was visited by an estimated two million people and has continued to enjoy sold-out audiences as it moved through Europe, Asia, and Israel.  Beginning this year, it opened to sold-out crowds in Canada and will be showing simultaneously in 29 cities across the United States. It is a blockbuster, unequaled in the world of art and worthy of Vincent van Gogh, whose paintings are to be found in premier art collections, hanging in the finest museums, and changing hands at auctions for millions of Euros. 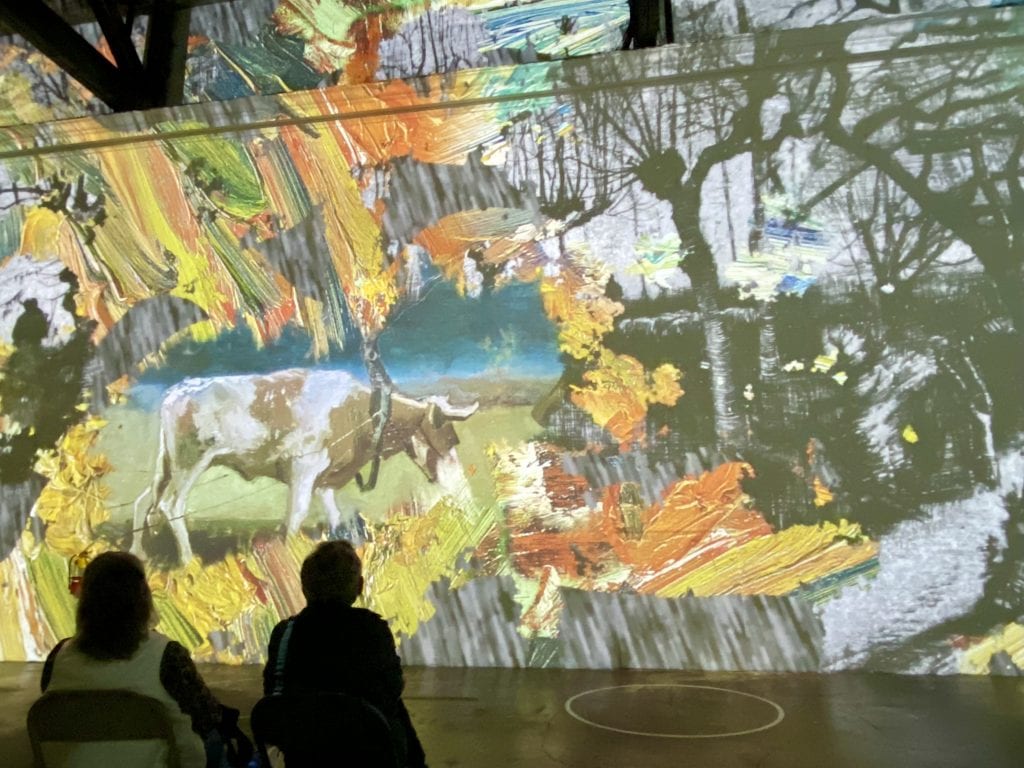 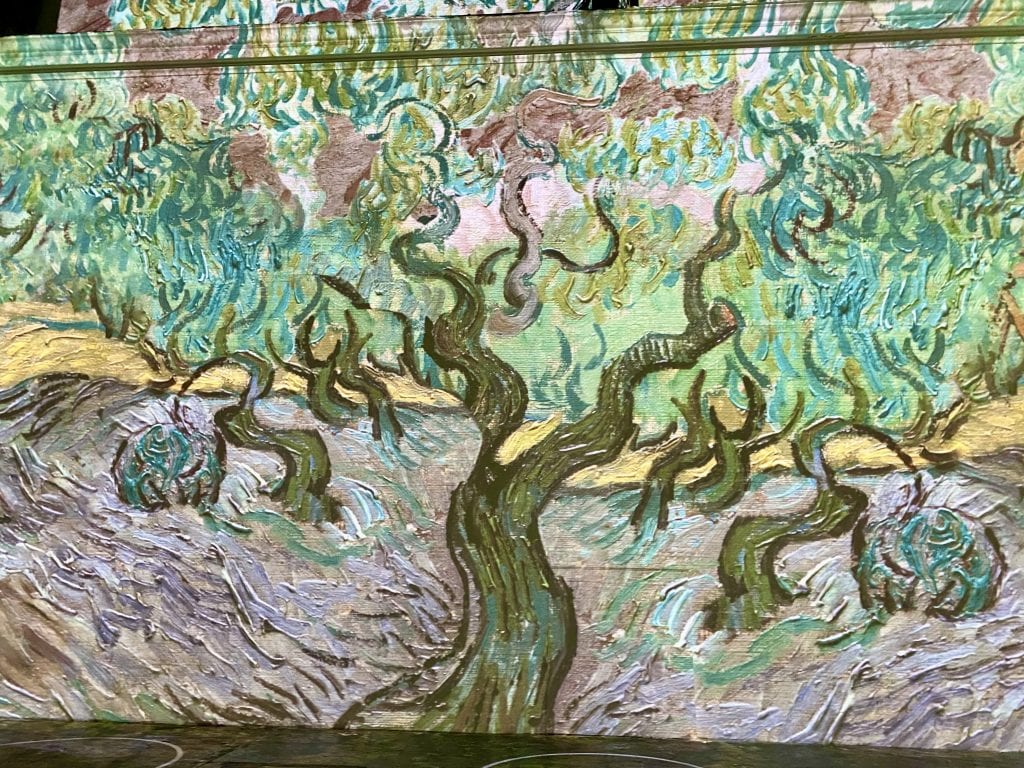 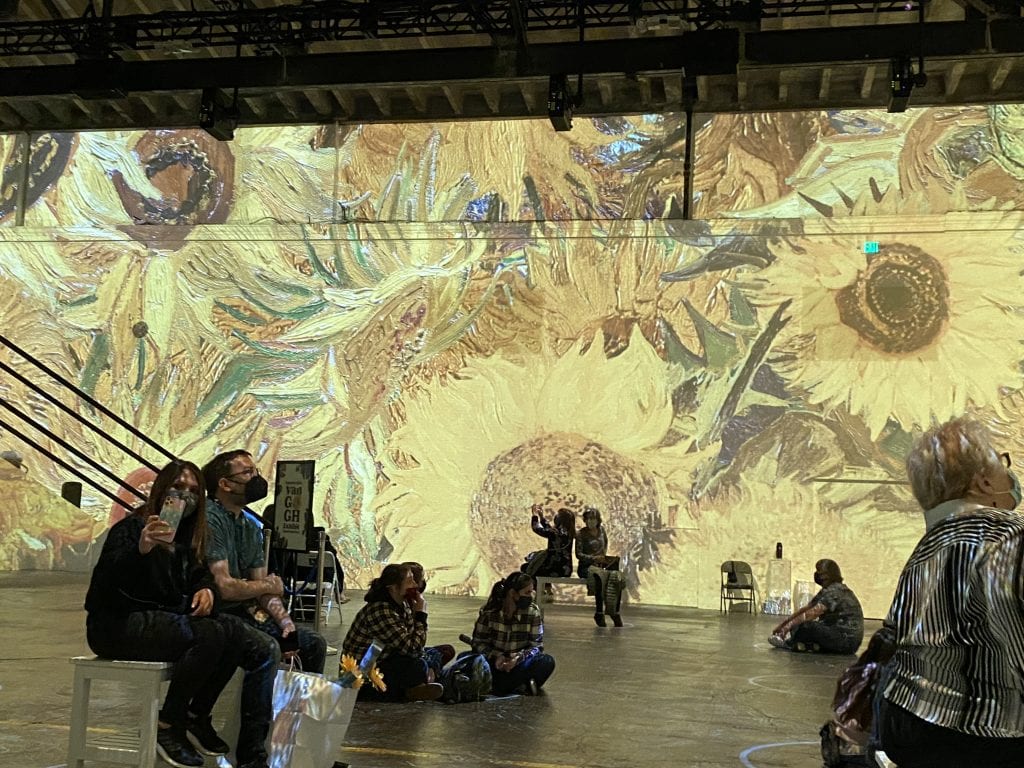 Seeing this exhibition as one emerges from the pandemic is like a shock of ice-cold water that awakens all the senses. It is bold, exquisitely colorful, pulsates with energy, and overwhelms with its scale and emotive musical score. The images are constantly changing, washing over the walls, the guests, the ceiling, and the floor, enveloping one totally into the experience. While in its mesmerizing grip, one escapes the mundane and is enveloped by the work and life of Vincent van Gogh, projected onto walls that are two stories in height: a 360-degree screening playing out on all four walls of the exhibition space, simultaneously.  With forty concealed projectors, the images keep changing creating a dreamlike experience of being swept up into the paintings, to feel the energy that went into every brushstroke and sense the emotion of the artist as he captured the image.

There is a fluidity to the screening as one scene flows into another. Golden sunflowers, so evocative of van Gogh’s paintings alongside vibrant purple irises shimmering in the sun, acquire the digital ability to grow and dominate the wall space. 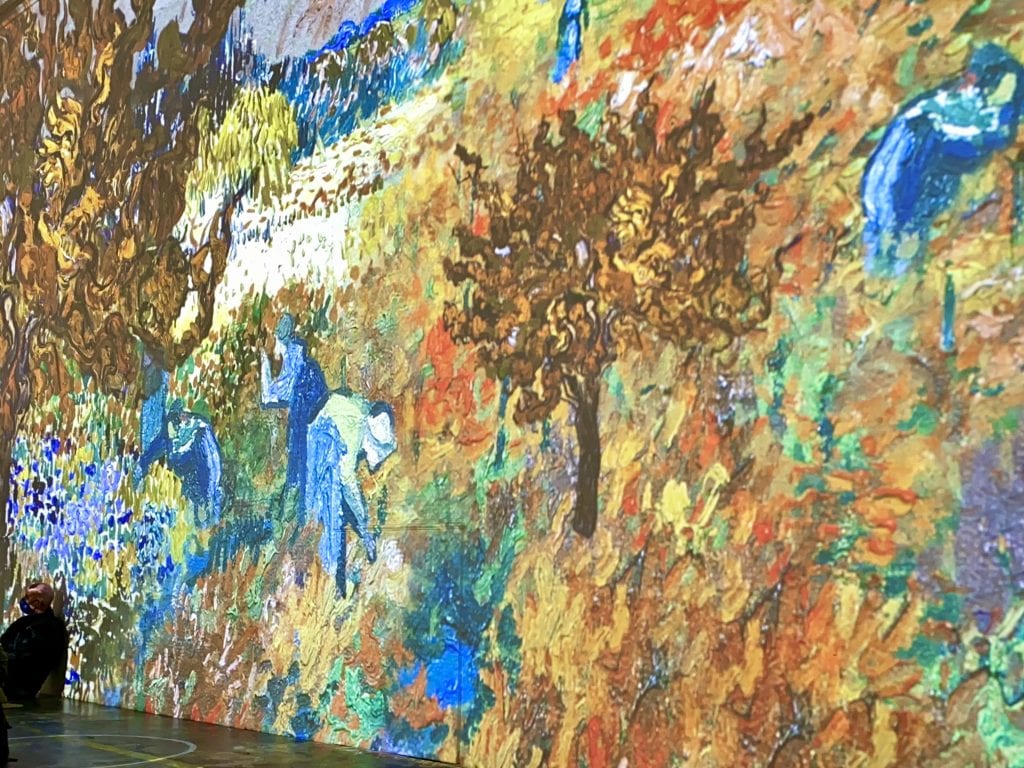 Then, landscapes of peasants working in the fields against a moving backdrop covering the scenes and bringing to life where ever Van Gogh chose to place his easel and paint. This immersive exhibition represents sheer genius created by masterminds who conjured up magic using state-of-the-art technology. 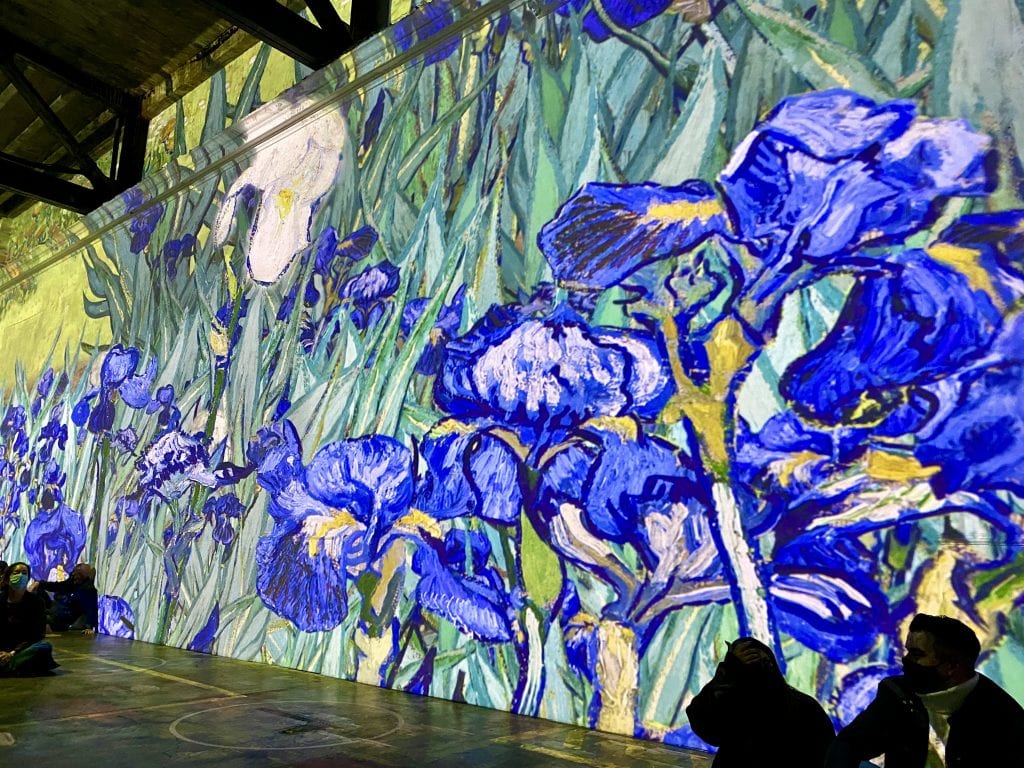 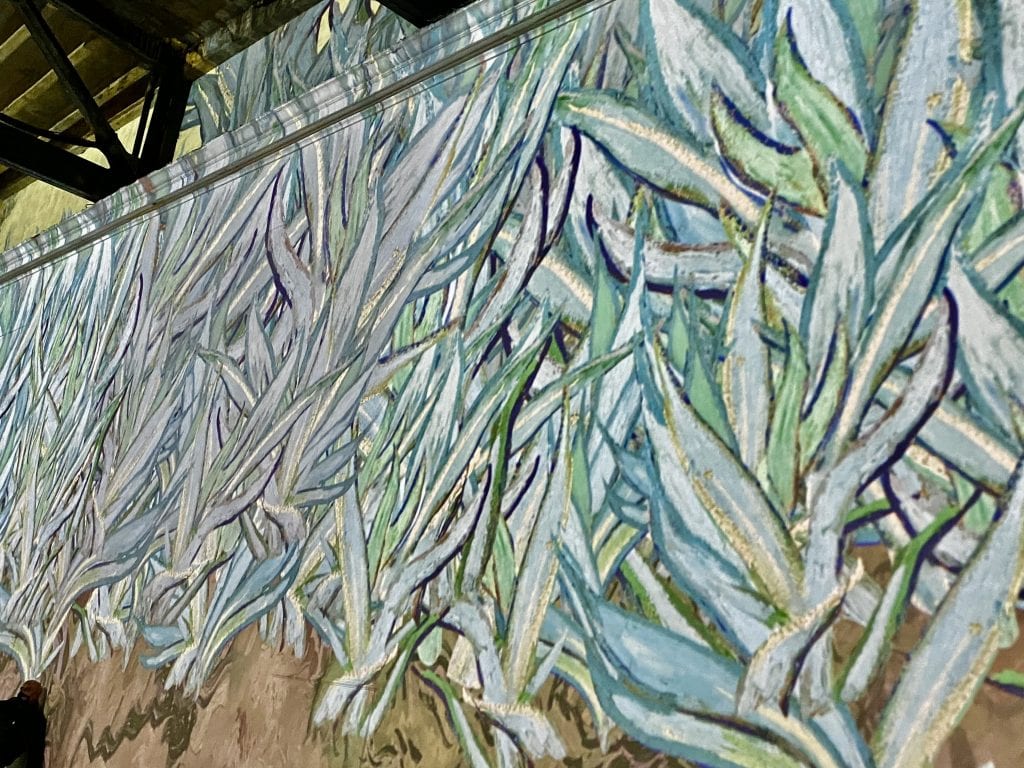 Who are the masterminds?

They are a team led by Italy’s Massimiliano Siccardi, who has worked for 30 years on immersive exhibitions and is also a tech genius, known as the “best of the best” of immersive art installations, designing these high-resolution screens; working together with composer Luca Longobardi, who created the soundtrack, a pastiche of his own compositions blended with works by Vivaldi, Schubert, Handel, Bach, Ravel, Thom Yorke a Britsh Rocker, Imogen Heap, a British pop artist/composer, and Edith Piaff singing “Je Ne Regrette Rien!”  The musical score is an integral part of the show, playing in tandem with the screening, rising and falling in volume to create the sense of drama — and sensory overload! 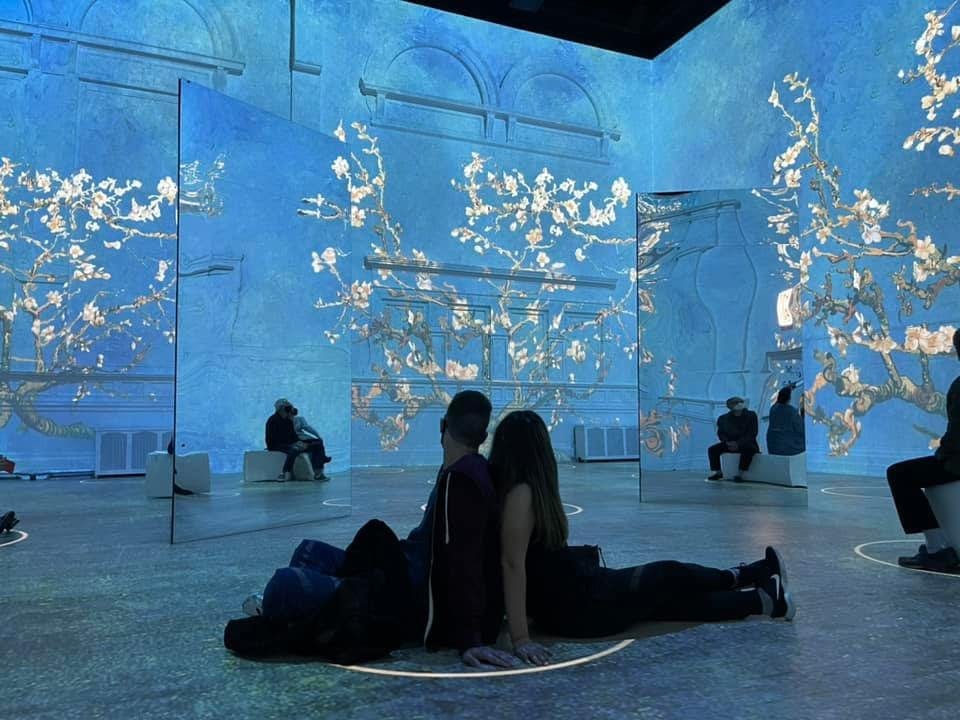 Each venue where the exhibition is shown is different, and the tape needs to be adjusted by the creators to the venue, its individual dimensions, the height of its walls, and its specific architecture. In San Francisco, the show is being screened in a 100,000 square feet cavernous building that was at one time known as the Carousel Ballroom. Following that it became a well-known venue for Rock Bands and is a part of San Francisco’s legendary music history where “The Grateful Dead” and other popular rock bands performed regularly — although it looks more like an old parking garage! It is organized down to the minute, using contact-free tickets, with guests arriving at timed intervals and follows strict COVID19 guidelines: masks have to be worn and the floor is marked in circles, six feet apart. This allows each party of guests to have their own circle or pod, and each circle has its own seating, although, many people chose to walk around or sit on the floor. It was a diverse crowd,  ethnically, culturally, age-wise, and in every other way: indeed, it is suitable entertainment for mixed generational groups and perfect for a family outing. It was refreshing to see a number of these in attendance, with little children trying to catch the images on their hands or going up to the wall to observe the magic! 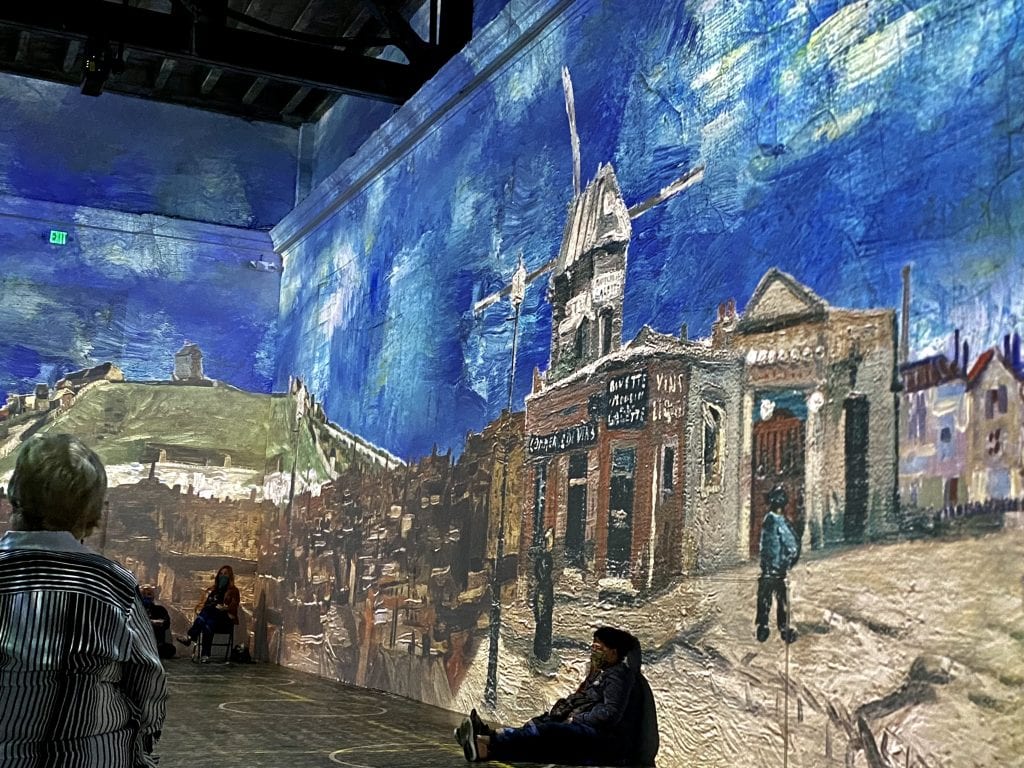 While some stuffed shirts may criticize seeing museum-quality art screened digitally onto blank walls, I totally endorse the concept of taking world-class art out of the museum and into the “light.” This extends the memory of the artist and his work,  stimulating conversation and provoking ideas. The fact that this exhibit has been moving throughout the world,  receiving rave reviews and sold-out audiences, is a testament that this is a way of presenting art to the masses after all.  Many of these visitors have never set foot in a museum or are ever likely to do so — and this opens up a whole new world for them.

Of the 2,000 plus pictures painted by van Gogh in his lifetime, the exhibition features most prominently themes of the four paintings seen above: The Bedroom, 1888, The ever famous Starry Night, 1889, The Potato Eaters (1885),  and Sunflowers (1887). 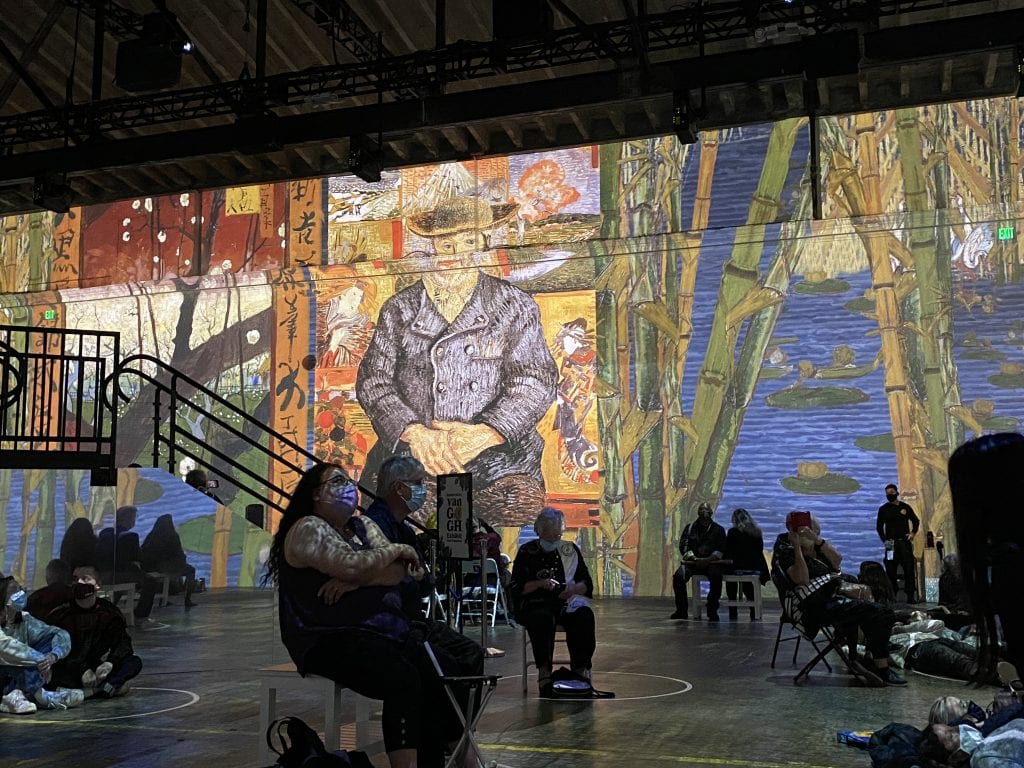 For now, The Immersive Van Gogh Exhibition will continue showing in 29 cities across the United States as well as in Canada, with each opening eliciting unanimously positive reviews,  pushing the attendance numbers way higher and further endorsing the popularity of this medium. 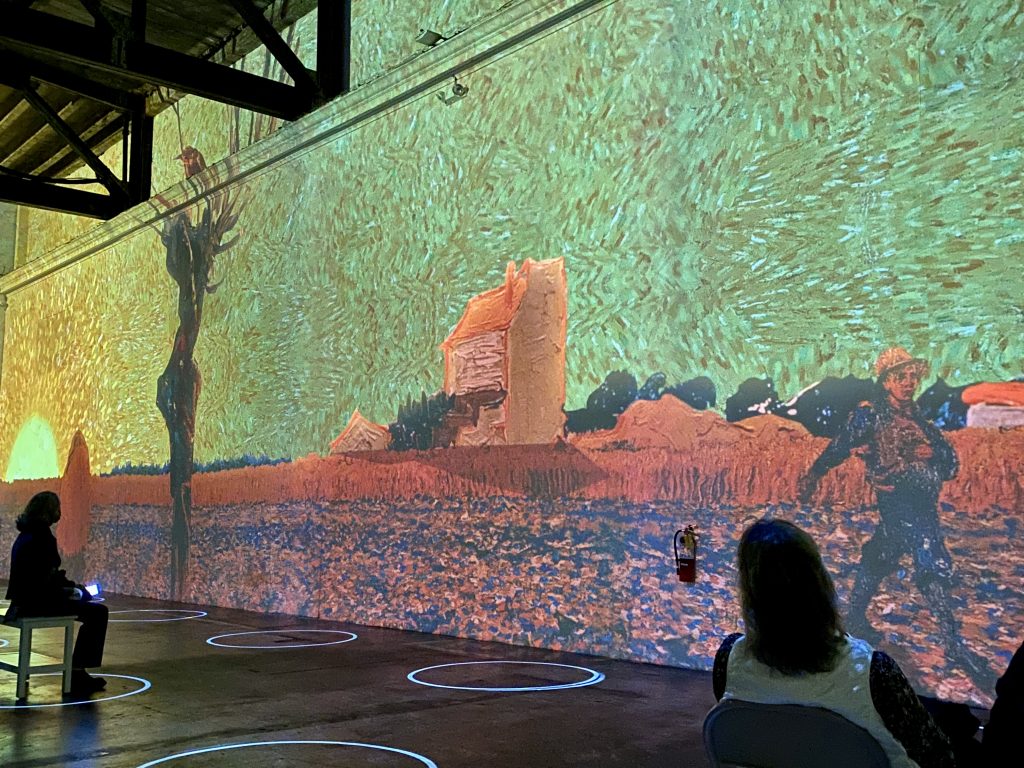 This is a once-in-a-lifetime blockbuster experience merging art, technology, and music presented with mindblowing imagery. So come out of the COVID and re-enter the world as we once knew it by attending this spellbinding exhibition: to quote from one of the neon signs at the exhibition:  “It is safe to Gough!” 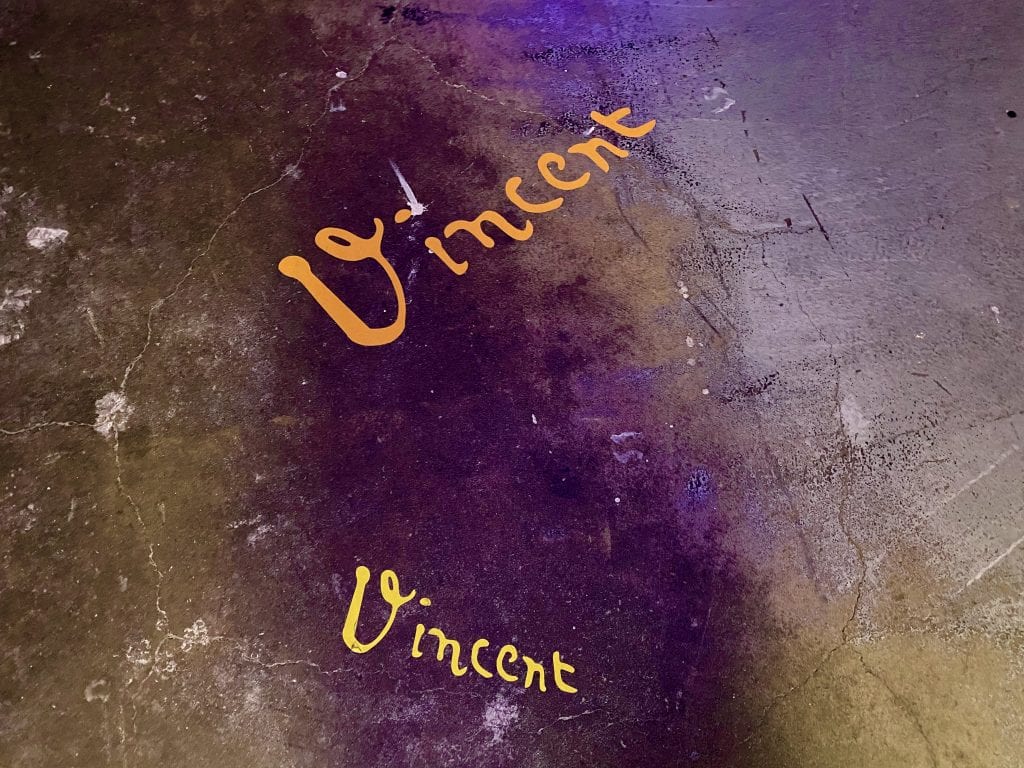 SIDEBAR: Presently there are another four van Gogh Immersive exhibitions traveling around. The name of this one: IMMERSIVE VAN GOGH. Please check the internet for cities where this is presently showing!