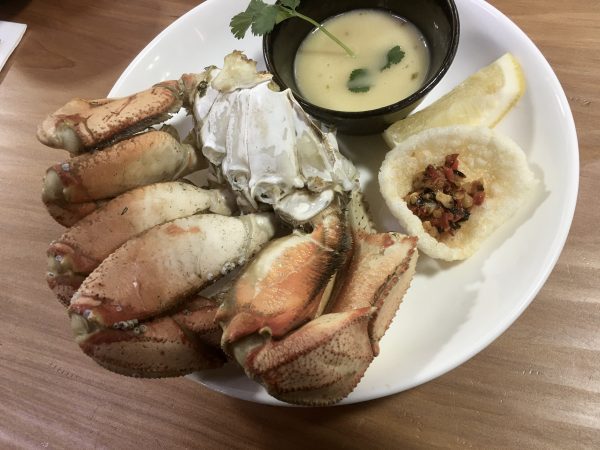 The crab season is always welcomed in the Bay Area and several restaurants offer special menus featuring crab to celebrate its arrival. One such dinner was offered through an invitation for a popup Ichido seven-course tasting menu featuring crab, prepared by local Chef Geoffrey Reed, that was to take place in the Sequoia Sake Brewery in San Francisco. Attendees left feeling anything but crabby.

Literally translated, the Japanese word Ichido means “one time.” A more comprehensive explanation is that it is a dinner that takes the form of a communal omakase or tasting menu, where diners connect and interact at communal dining tables. Think of this dinner as a unique experience that embraces the guests at the table as well as the food being served. It is unique to this moment and you are in the moment with the food,  the conversation, and the ambiance.

The Ichido was to be prepared by  Reed, who had come up through the ranks via the area’s best restaurants, including Plaj of San Francisco and the much-celebrated Teeter House in Scottsdale, Arizona, led by Chef Nobuo Fukuda. With a fascination for Japanese food, art, and culture, Chef Geoffrey had traveled back and forth to Japan a number of times to experience the country at a deeper level. His immersion into the culture is such that when he was younger, he studied ceramics wanting to create plates that would complement the food being served at Ichido dinners at a restaurant where he worked because he believes “no plate is finished until it has the food on it.” Happily, today, he is the one “finishing” those plates.

Who is Chef Geoffrey Reed?

It’s Reed’s background of growing up in a small California town, McKinleyville, that gave him his love for the ingredients that he incorporates into his recipes. A country boy at heart, he enjoyed the outdoors and the freedom it gave him playing in the garden: watching things grow and familiarizing himself with plants and nature. The creek behind the house where he lived was where he learned to fish, the catches from which he would later prepare for his parent’s dinner table. His parents supported him in whatever he did, and while the garden and the creek were his outside playground, his mother’s kitchen became his laboratory where he began experimenting with different flavors and food combinations, teaching himself to make sophisticated sauces even as a young boy.

Atypically of young boys, he also had a fascination with baking, which began as he watched his aunt making “Dutch Babies.” As a five-year-old, Jeffrey was fascinated that a simple batter of flour, butter, and eggs, would inflate when it was put in a very hot oven and was himself baking Dutch Babies several times a week from then on!

He continued this experimentation playing around with different flavors, increasing his repertoire as he honed his inborn talent. Not surprisingly, at twelve Geoffrey took his first job in a kitchen. Although still at school, he began to work his way through every restaurant position, gaining promotion after promotion.

By the age of seventeen, when he enrolled in the Scottsdale Culinary Institute, a Cordon Bleu School, he already had an extensive restaurant background. It was then he began working with Japanese Chef Nobuo Fukuda, a James Beard award-winning chef who was running the five Star Teeter Restaurant in Phoenix, Arizona, which had become known as one of America’s premier restaurants.

For the next ten years, Chef Geoffrey was mentored by Chef Nobuo Fukuda, serving multi-course Omakase and Izakaya (small inexpensive dishes to accompany drinks). Here, he developed an appreciation for the fresh ingredients that were being used at Teeter House that were incorporated into the Japanese recipes.

In March 2020, with the onset of the pandemic, Chef Nobuo closed his restaurant when he was restricted to take-out, as the revenue was not sufficient to sustain the overhead; another irreplaceable loss to the restaurant scene caused by COVID. But it was not only loss: this was the opportunity that allowed Chef Geoffrey to make his way to one of the major food capitals of the world,  San Francisco, where he became associated with a number of top restaurants that he opened, including Plaj of San Francisco.  This year, he finds himself returning to his first real culinary love: Ichido dinners. As he puts it, the dinners are fascinating because of their ephemerality:

“For me, it’s about sharing a unique moment in time that stems from the concept ichido ichie, which translates to ‘one time, one meeting’. We should cherish the ingredients in their seasonality, the people in their diversity, and the place in its nuances as they all come together to create a memory or moment that will never be replicated.”

In San Francisco, the very notion of Ichido is unique and I have not heard of it being replicated. Our event was an Ichido Omakase. 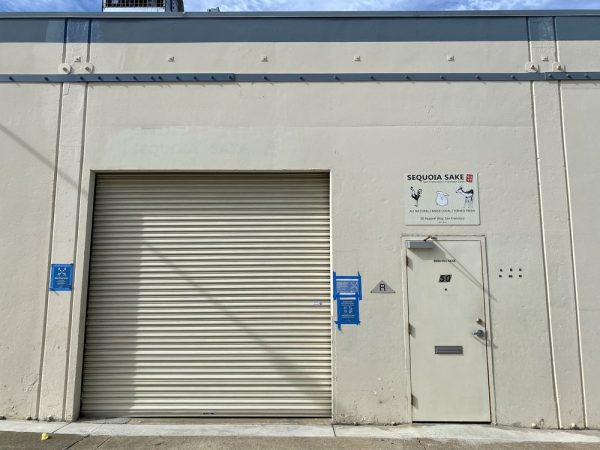 The venue for the Ichido was in the Bayview neighborhood, an industrial area of San Francisco. We found ourselves in front of the Sequoia Sake brewery, the only Sake brewery in San Francisco, where Jake Myrick and Nomiko Kamei produce award-winning nama sake, which literally means “raw or fresh unpasteurized sake”, which has a brighter, fruitier, fresher taste than pasteurized sake. 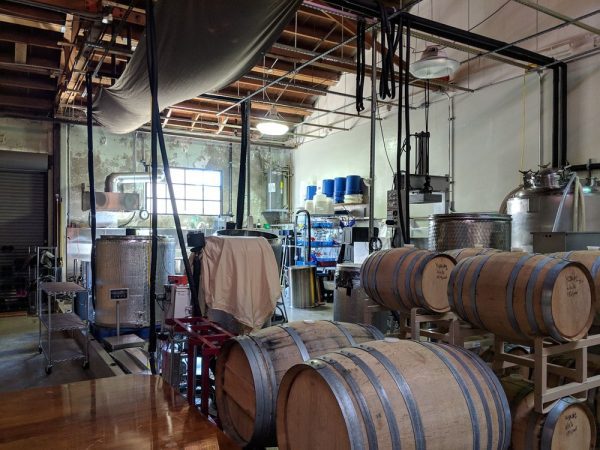 Sequoia is a working brewery and the vibe was perfect for our Ichido. The guests attending the Ichido were mostly strangers to one another, and the brewery was an unexpected place for a seven-course tasting menu.  The warehouse dates from the 1940s, when it was built to accommodate the burgeoning apparel industry in San Francisco.  With high ceilings, it now houses massive fermentation tanks and other brewing paraphernalia. 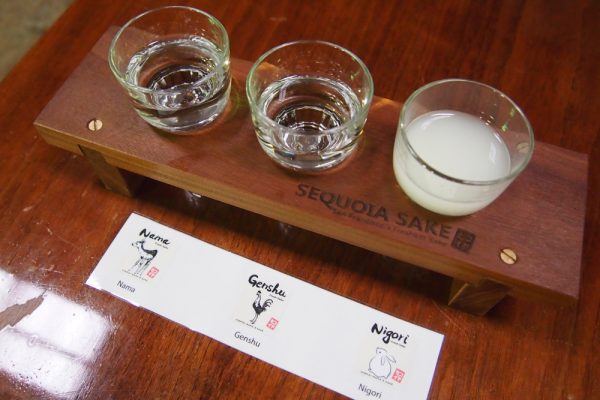 Appropriately, sake was to accompany or be paired with the Ichido.  For anyone wondering why Sake is made in a brewery and not a distillery, it is because sake is a brewed alcohol, made from fermented rice juice.  The rice being used in the brewing process is heirloom rice with a lower starch content that comes from Calrose, near Sacramento, and was carefully sought out by the brewers.  The result is a 30 proof (15% alcohol) sake, lower than most spirits. Comparing sake to wine, sake also has complex and fascinating flavors; and like wine, it should be sipped slowly and not chugged down. 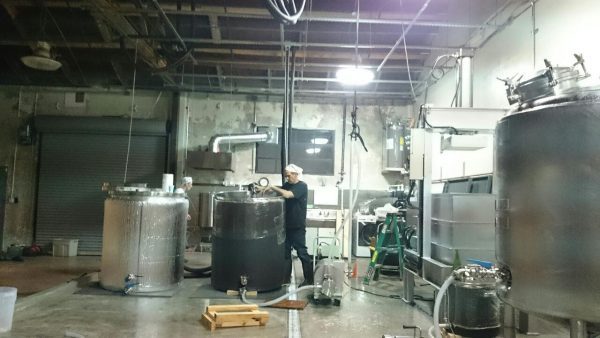 Arriving at 50 Apparel Way in Bayview, we entered this immense warehouse and soon passed all the brewing tanks to find a space was dedicated to three tables, set for ten guests each. Gradually, the other guests arrived and we were mostly strangers to one another with whom we were to share our experience.

One of the fundamentals of an Ichido is that the people at the dinner do not know one another and it is the connections that are spontaneously made at the dinner that gives it its unique experience, of the guests, the meal, conversations that come out of the meeting with strangers, different backgrounds and people one would normally not encounter. It is a non-judgmental experience, and conversation flows easily.

The week before the dinner, the chef had been busy gathering the contents for our brunch. True to his roots, he was out in the countryside, foraging for fresh ingredients, attending farmers’ markets to have seasonably fresh ingredients and freshly harvested fish and crab, to be sure we had the freshest and highest quality dining experience.

The meal was delicious, with vibrant flavors I could not recognize. The recipes are intimate, as they are created by Chef Geoffrey, using Japanese ingredients with a California twist.  Some of the ingredients we could discern and others, especially the foraged greens, were novel. The platings were equal to an artist’s canvas and the food was arranged like a picture, a picture that whetted the appetite before each bite: an explosion of flavors. The food presentation and the plates used are very important to Chef Geoffrey; almost as important as the ingredients. The intent and reality are that the food and the plate blend harmoniously. 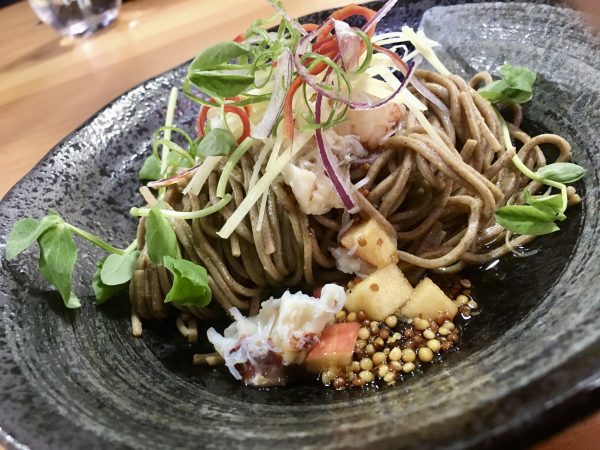 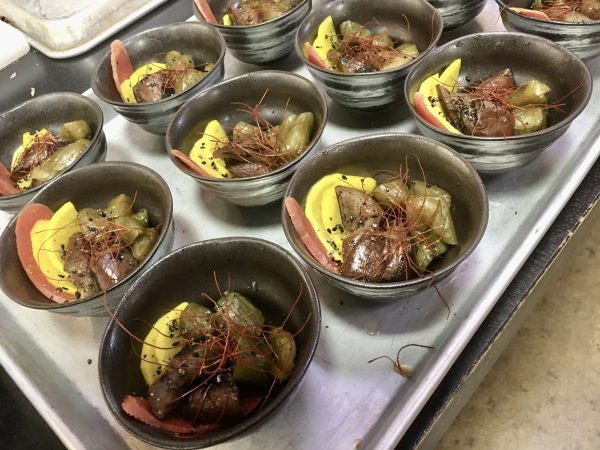 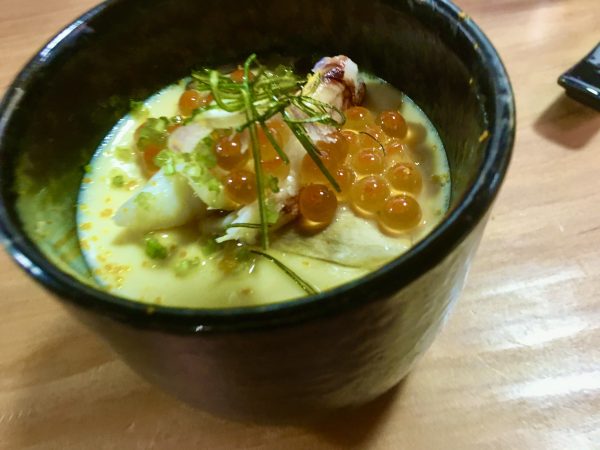 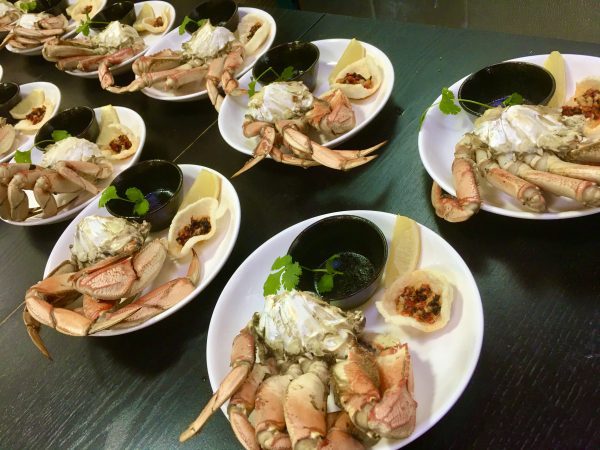 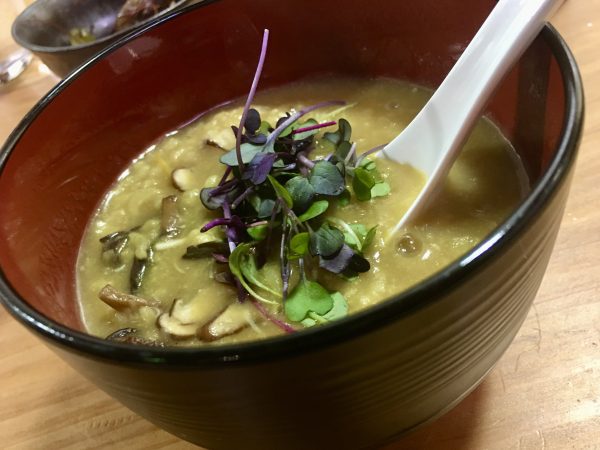 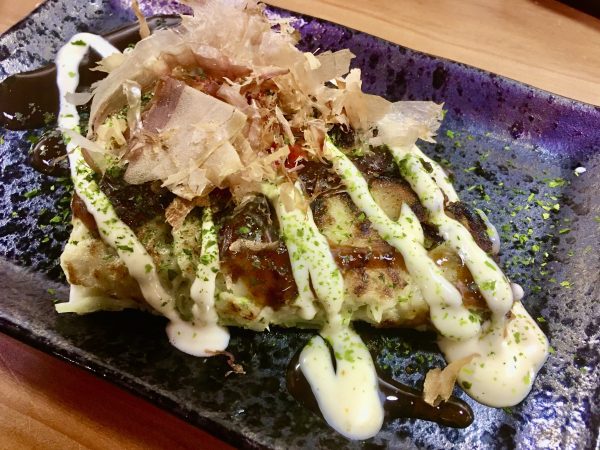 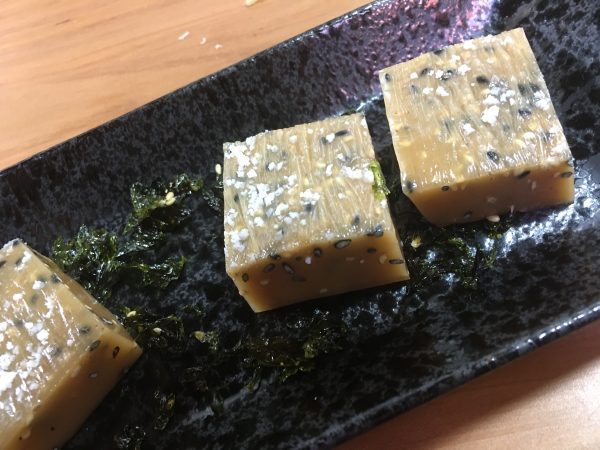 Amidst all this food shared with strangers, you might think you’d miss the intimacy of a small group of known friends out for dinner; but rather than eating with unknowns, the company at the table mingles, leading to interesting and unexpected conversations, as course after course of delicious food is served and the glasses are filled and refilled with sake from Sequoia Sake Brewery. Sequoia Sake conducts tours in the Brewery every Saturday between 12.00 p.m.. and 5.00 p.m. and a flight of three sakes is available for $10.00. Jake from the Brewery does a running commentary on the Brewery and the process for brewing the sake, as well as answering questions. 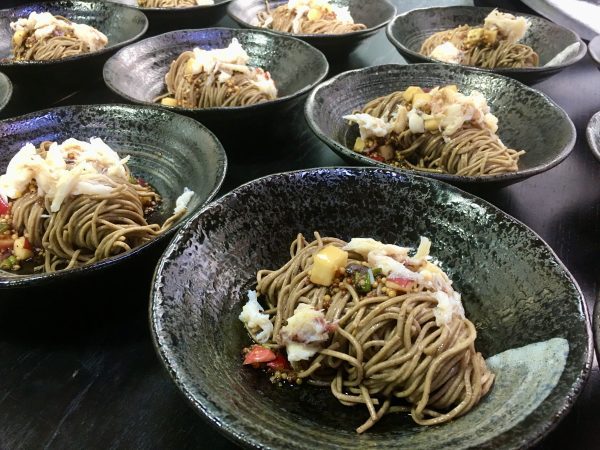 Geoffrey Reed is the owner of ICHIDO, a weekly pop-up restaurant that he established in 2015, and has since served over 10,000 guests at these dinners. To be included in the guest list, sign up at: