Loule is an authentic market town on Portugal’s Algarve that managed to sidestep the tsunami of foreigners who descended on the region before the pandemic. It remains beautifully preserved with a few notable historic buildings, cobblestone streets, and narrow alleyways where artisans have their workshops with storefronts opening onto the street. But most of all, it is known for its covered market that occupies a prominent place in the center of town. 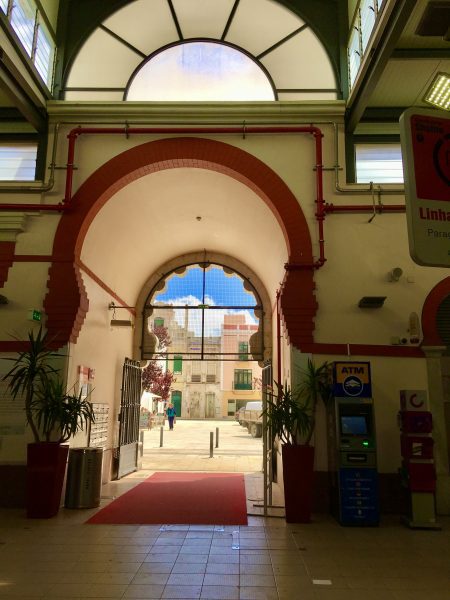 Founded as a trading post in the 2nd Century BC, Loule reached its peak during the 8th – 12th Centuries when it was an important Moorish city.  The present market was built in 2007 to represent that history, featuring Moorish details and Neo Arab styling, reminiscent of its Moorish heritage, and the marketplace site which has survived on this spot more than one hundred and fifteen years, operating as a market from Monday to Friday. On Saturday, it is augmented by an additional market and a gypsy market that bring hordes of people to town, creating congestion in and around the market area. 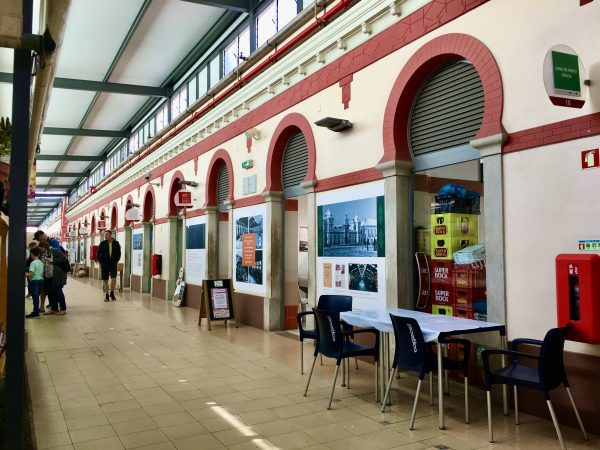 This is a distinctly Portuguese market that operates for the town’s local residents and the immediate surrounding area; a place dominated by individual stalls representing little family businesses. Going to the market is usually a daily experience and an excuse for people to get out of the house and exchange the latest news with their neighbors. Not much English is spoken, unlike the rest of the Algarve that has seen an influx of English-speaking tourists and residents. 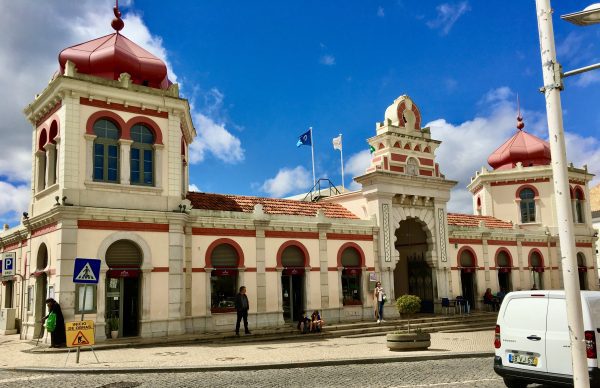 Situated on a wide cobblestone street in the center of town, the market has distinctive burgundy onion domes, with Moorish details around the doorways, with the same detailing being carried through inside the building. When I first saw it from the outside, I was sure it had survived hundreds of years of trading because of its strong Moorish character, not knowing that it was opened in 2007 and is a young 14 years old.

This represents a meal on its own: locally produced sausage, paired with local cheese and a selection of sauces.  The peri-peri sauce has been adopted all over Portugal and originated in Angola, a territory that once belonged to Portugal before gaining its independence. The red peppers that are used in this fiery sauce are grown in Africa, and it has a distinct flavor that goes well when mixed with olive oil and basted on grilled fish and meat. 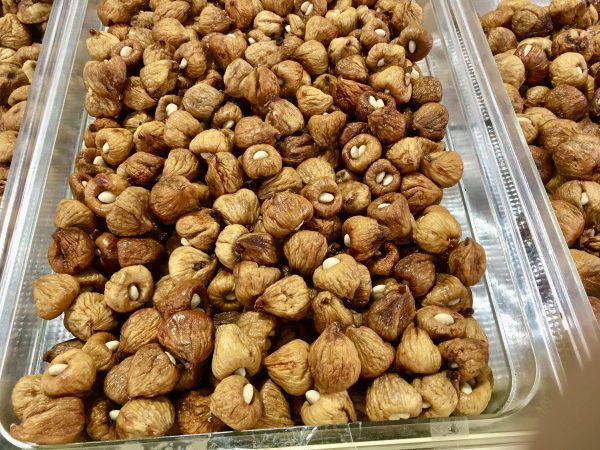 The Algarve has an ideal Mediterranean climate where figs flourish. At the end of the season, they are harvested, dried, and turned into sweetmeats combined with almonds, that also flourish in this climate. I had never seen this type of food decoration before and had to look twice to recognize its simple ingredients almonds. 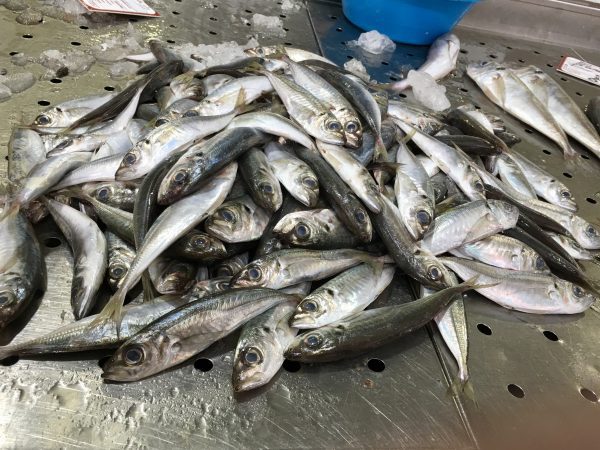 Portugal is famous for sardines: specifically, fresh fish that comes from the ocean and does not originate in a can! An inexpensive and nutritious food, the sardines are served daily in many homes and are also a staple on restaurant menus, grilled on the open flame, and served with fries and a simple salad. The beautiful weather allows for this to be eaten at the outdoor cafes, in the shade of a large umbrella, paired with local “green” wine, a refreshing wine that is only available in Portugal, due to its high demand and short supply.

The colorful displays of fresh fish come from the nearby bountiful waters of the ocean surrounding the Algarve coastline. You can be sure the fish on display was taken from the ocean in the previous night hours or early that same morning. The fishmonger will gut and clean the fish as well as advise his or her customers on the best way to prepare it.   There is no extra cost for this — in fact the conversation that ensues is repeated several times a day and is an integral part of the sales process.

Packages of seasoned salt are available in the market, too: these originated in the Loule Rock salt mine that has been excavated to a depth of 750 feet and runs underneath the town of Loule. Little packages of salt seasoned with fresh oregano, thyme, garlic, rosemary and, Piri-piri are on sale. Even the salt is local and fresh!

The vegetables and fruit are not homogenized, cleaned, and presented in plastic bags as we do in the states. Rather, they are sold loose often with remaining particles of dirt — it takes a bit of getting used to, but you can be sure everything was harvested or picked that same day! This was the first time I had seen “prickly pears” in a market — this is the fruit of the fleshy cactus with thorns and is quite delicious eaten fresh. Once, of course, you learn how to avoid the thorns. 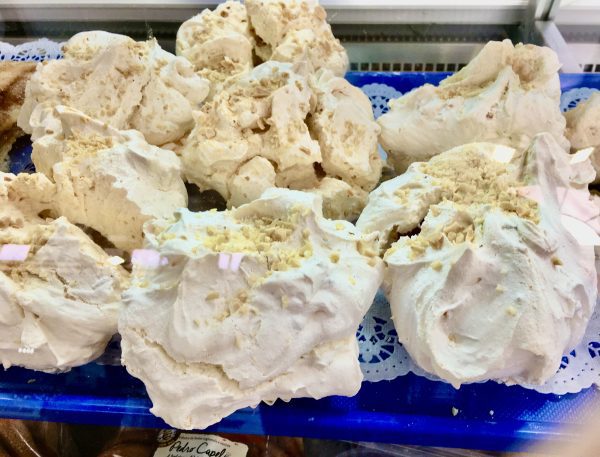 This is usally the least expensive item in the market. The famous pastel de nata and other egg custard pastries for which Portugal is famous, incorporate the yolks of the egg only, leaving a surplus of unused egg whites — and this is a way to use up the egg whites that would otherwise go to waste.  In the olden days, the whites were used in the convents to starch the nun’s habits, but I’d say this is a far tastier way to take care of the excess of whites. 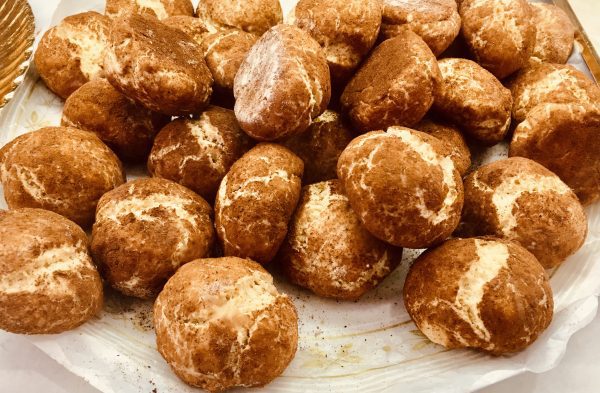 These are “biscoitos de amor e canela,” which literally means “cookies of love and cinnamon”  — every nationality makes these under a different name, but they are usually associated with some type of love or marriage. This is the Portuguese version, with swirls of cinnamon — and they are very delicious. 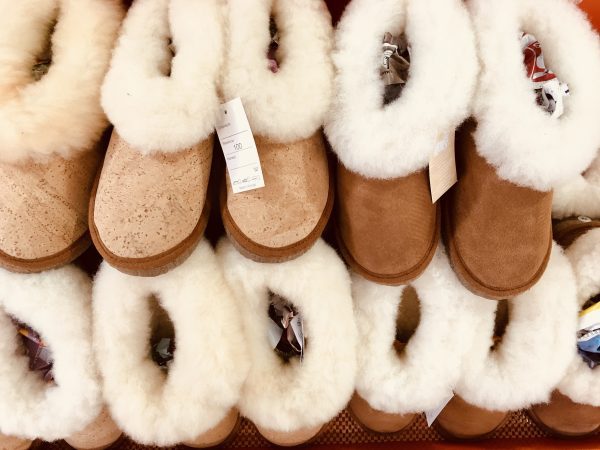 Handmade slippers, soft and comfortable —  the local version of UGGS but at a very inviting price, even though they are handmade. No patent pending! 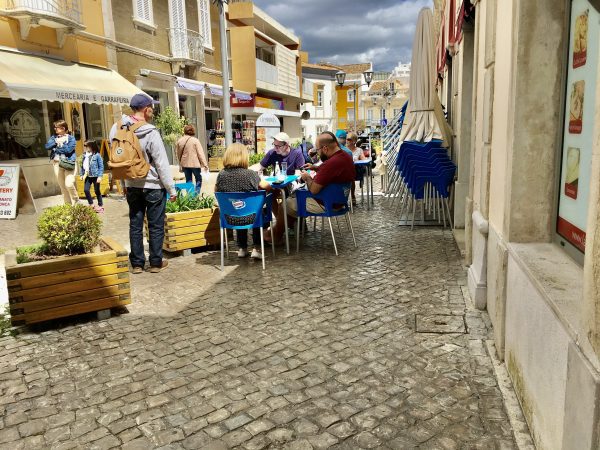 Just outside the market,  there are even more little stores selling items like Portuguese pottery, handbags, linens, and embroidered table cloths: all reasonably priced for unique gifts for people at home.

Take a stroll around the town, stop at a little hole-in-the-wall restaurant for lunch and finish your outing at one of the local pastelarias serving traditional Portuguese pastries and delicious coffee. You never know what you might find — as proven by this sign I saw while out strolling. 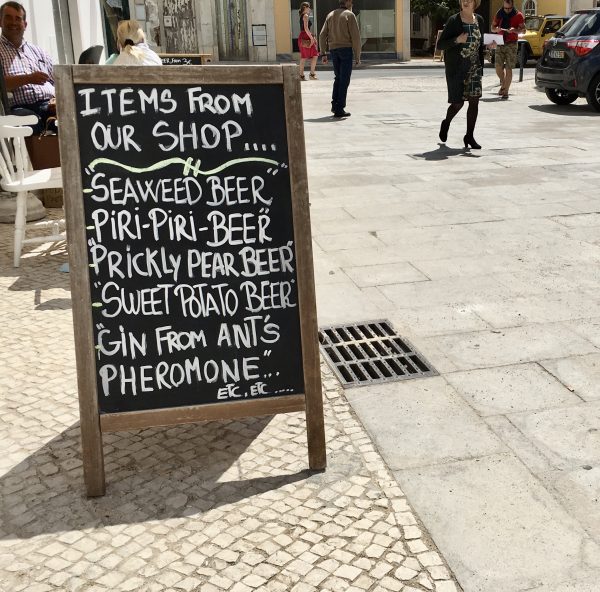