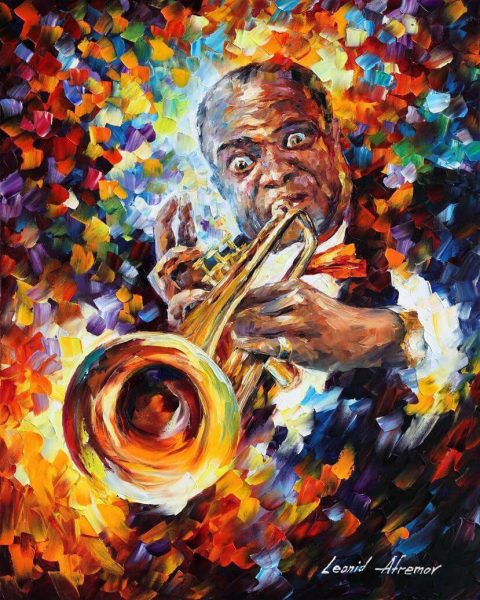 Louis Armstrong, American musical ambassador, and arguably the world’s greatest trumpet player possessed a style that steered jazz in a new direction — from syncopation to sophistication, with a dash of swing. 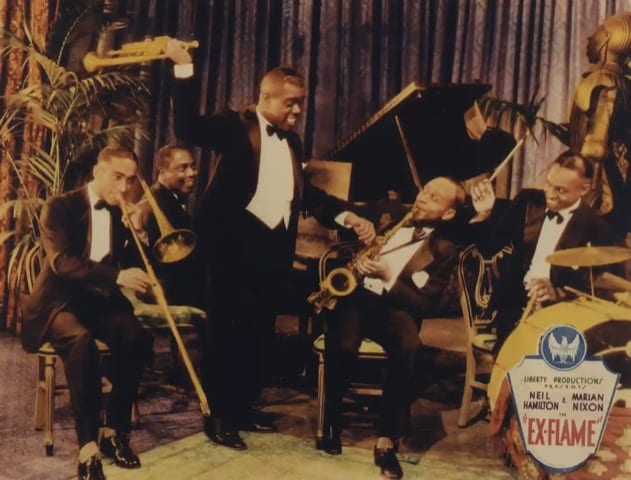 Roll the credits for a unique life…….

Trumpet soloist, band conductor, recording artist, composer, singer,  movie actor, radio broadcaster. He collaborated with  Ella Fitzgerald, Billie Holliday, Frank Sintra, Barbra Streisand, Grace Kelley, Bing Crosby. Lionel Hampton, Carol Channing, Danny Kaye, and Disney, recording seventy songs and several albums throughout his career; appeared on the front cover of Time Magazine a few times,  performed at Carnegie Hall, was inducted into the  Rock and Roll Hall of Fame, and the Grammy Hall of Fame, and had a star on the Hollywood Walk of Fame … and in the five decades that he made music he left behind an unrivaled musical legacy, seldom if ever equaled. 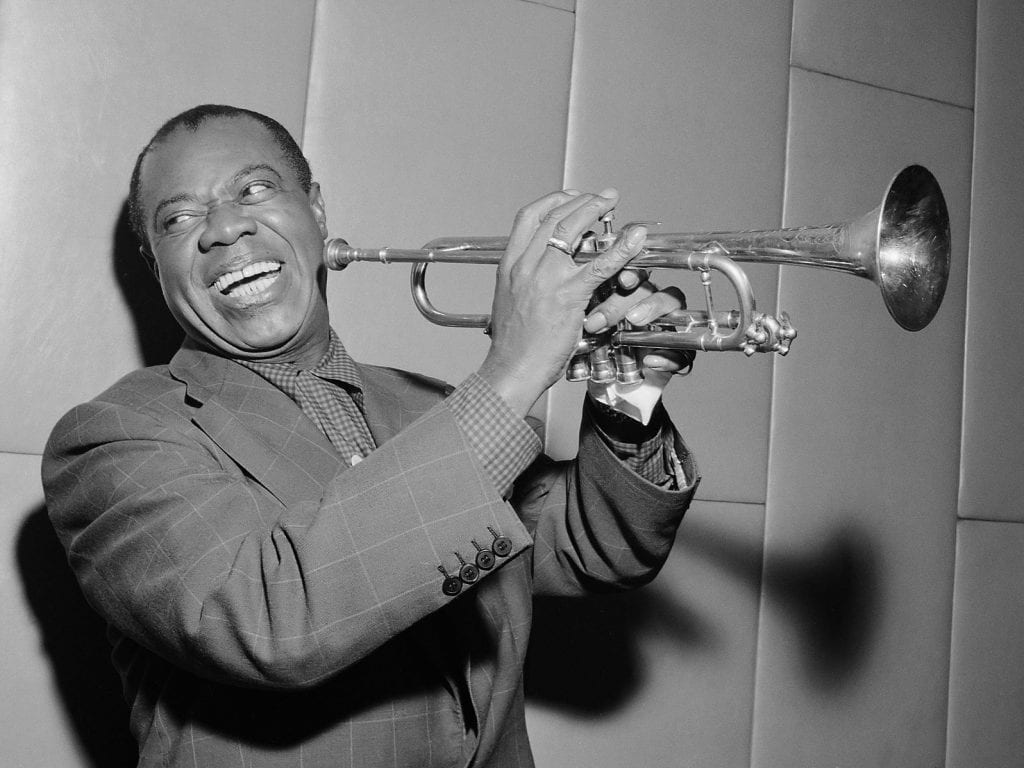 There is no mistaking his gravelly voice as he belts out “When the saints go marching by” or honey, treacly overtones that tug at the heartstrings when he sings “What a wonderful world.”Louis Armstrong, the grandson of slaves, born into one of the poorest neighborhoods of New Orleans to a teenage mom with a dubious occupation (a “Lady of the Night”) and an absentee father. This was the hand he was dealt; but instead of perpetuating the “sins” of his parents,  he chose a trajectory that took him in a different direction.

But before all this happened there is one little chapter that is less known, although he does mention it in his autobiography. It is the story of how this little neighborhood urchin found work with the Karnofsky Family, where he was embraced, leading to a lifelong friendship.  This was especially true of Morris Karnofsky, who recognized how musically talented the young Armstrong was and encouraged him to buy his first cornet, which would become the opening salvo of his career.

The Karnofskys, Lithuanian Jews who left behind the persecution of Eastern Europe to make a better life for their family in the United States, found their home in the catch-all neighborhood of the Third Ward in New Orleans, made up of a mixture of African Americans, survivors of freed Slaves who had migrated to New Orleans from the nearby Plantations, recently arrived Eastern Europeans, Italian and Chinese immigrants. The result was a checkerboard, a hodgepodge of ethnic groups, managing to live and work harmoniously together.

Close by was South Rampart Street,  the main commercial corridor, where many of the Jewish and Italian immigrants opened little shops such as tailors, shoemakers, pawnshops, bars, salons, dancehalls, and the Chinese opened restaurants, introducing Chinese food to the neighborhood, where everyone who could afford it got their first taste of noodles and dumplings. The street catered mostly to the black community. A child who spent most of his daylight hours on the street, this is where the very young Armstrong managed to earn a few pennies singing on street corners with his friends. absorbing the culture and the sound of music coming from the dancehalls.

The young Armstrong found a job with the Karnovsky family. One his jobs for the Karnofskys was to accompany Morris and Alex, the two Karnofsky brothers, sons of Louis and Esther Karnofsky in a horse and buggy cart, where they would collect junk to be resold, and deliver coal to the “Ladies of the Night” who were living in “mansions” (brothels!) in the Storyville neighborhood.  To distinguish their buggy from the others, Louis would play a tin horn as the wagon wound its way around the neighborhood, announcing their presence.

On completing the round of collecting rags and junk, when the boys would return in the evening, Mrs. Karnofsly would include Louis with the family for dinner, making sure he was well fed. There was a bed made up for him to have a good night’s sleep — a lot more comfortable than his bed, if he had one, in his grandmother’s house, where he was living at the time.

Mrs. Karnofsky would sing him Russian Lullabys as he was falling asleep and some of these melodies were later incorporated by Louis Armstrong into his compositions. This was where he acquired his love of Jewish food — and sitting around with the family in the evenings, he also learned to be fluent in Yiddish, a  patois of Hebrew and  Medieval German, spoken by the Jewish immigrants who were not familiar with English. In his book, Louis Armstrong wrote of the Karnofsky’s: “It was the Jewish Family who instilled in me singing from the heart. They encouraged me to carry on.”

Fate intervened when one day, passing Jake Fink’s pawnshop on South Rampart Street, next to the Eagle Salon with its blaring music, he noticed a burnished brass b-flat cornet for sale in the window. The price was $5.00. Unable to afford it,  he borrowed $2.00 from Louis Karnofsky and paid the balance in fifty-cent increments, until he could buy the horn — the beginning of his musical career!

Louis Armstrong continued to work for the Karnofsky’s from the age of seven until he turned twelve. That year, on New Year’s eve, he stole his grandfather’s pistol and fired off a round, for which he was arrested. The punishment was severe and he was sent to the “Colored Waifs School for Boys” (what a name!) for committing the crime. However, it was here that the talented musician was able to get some music lessons on his cornet from one of the teachers, that would advance his musical career. 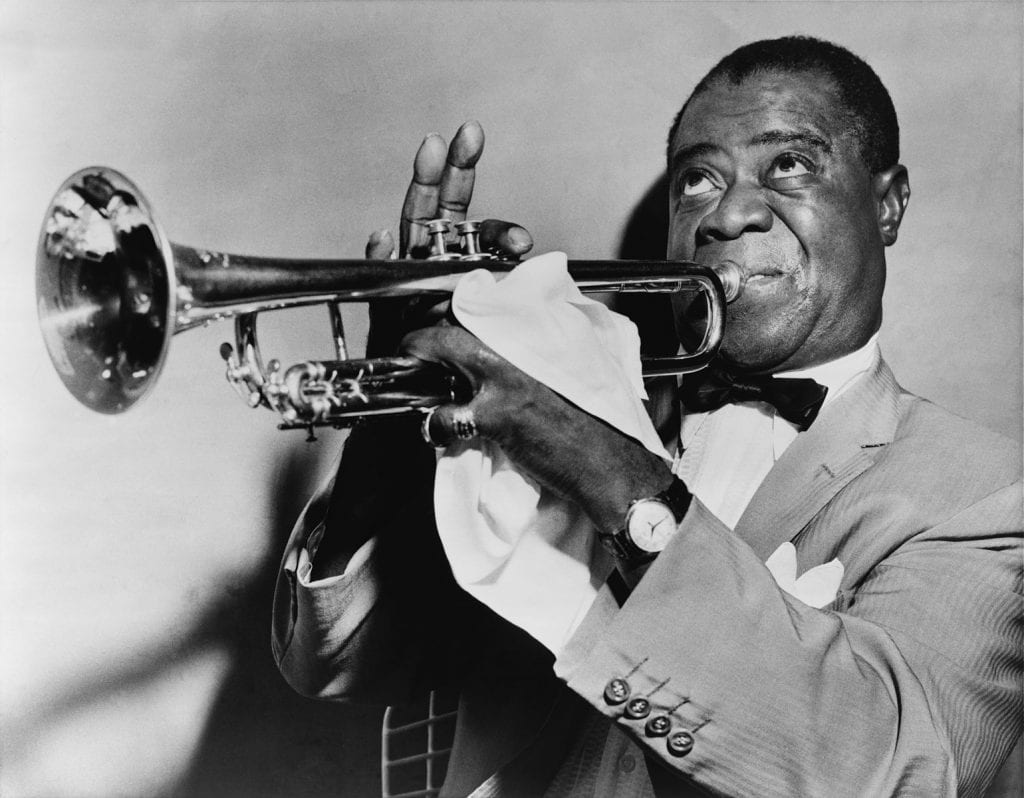 Regaining his freedom as a young adult Louis Armstrong began performing with a number of bands, but his musical career was limited in New Orleans, due to segregation. Moving to Chicago, he was able to make better connections with different bands, traveling easily between New York and Chicago with other African American jazz musicians, becoming famous for his outsize musical energy, and daring trumpet technique

Once “Satchmo”, as he was also known, became famous, he and his band became inveterate travelers, touring the world incessantly, giving performances to sold-out crowds where ever they performed. He completed about 300 tours a year: Europe, Scandinavia, Asia, Russia, Australia, and Africa, playing for up to 500, 000 people at a time. There are many stories about Louis Armstrong’s history, as he lived his life large,  but it was in Europe, especially Paris, where he was treated as an equal and loved and revered for his music, irrespective of his skin color. He grew an international fan base,  was a citizen of the world, and honors from everywhere were rightfully bestowed on him.

And the Karnosvsky’s remained his friends for life.  They had worked hard, saved their money, and become property owners in New Orleans, changing their last name to Karno. The sons, especially Morris, who owned a prominent music company and several Jazz Clubs in the French Quarter,  all continued to stay in touch with Louis, attending performances in NYC and Chicago when possible. Of course, Louis would visit them when he had the time on his visits to New Orleans. 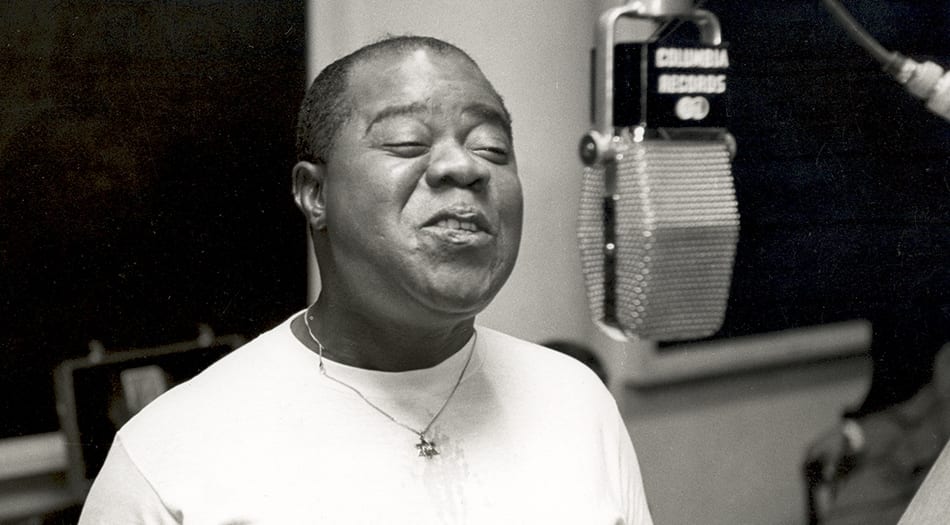 As Satchmo himself said of the family: “I shall always love the Karnovskys. I learned a lot from them, about how to live with determination. I felt like I had a future and that ‘It’s a wonderful world after all.”

6 thoughts on “Louis Armstrong: What you probably don’t know……………”