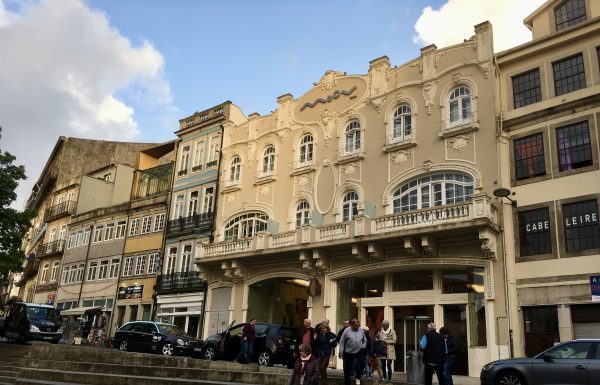 Even with the iconic, rattling, clanging, trams and lines of traffic endlessly rounding the curve of Bathalha Square, the five-story Moov Hotel, with its restored Art Deco facade is a commanding presence. The imposing facade is decorated using a muted salmon pink with cream accents, reminiscent of vintage postcards — the same color brought back to life from the original, old archived drawings. 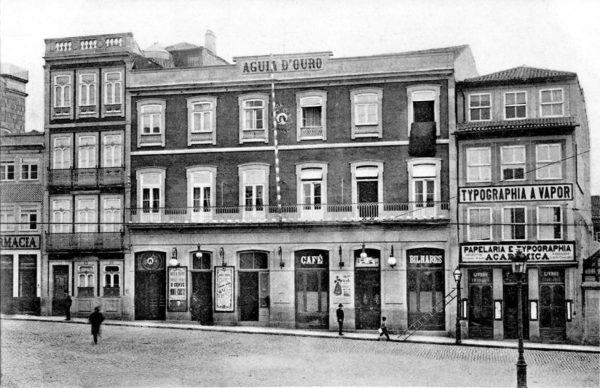 But what was once the Aguia D’Ouro Cinema, which opened in1839, is now the Moov Hotel Centro, embodying the spirit of this emblematic Cinema and its story.

The building has a long and illustrious history and was once an important part of Porto’s cultural and social life. Like a chameleon, it kept changing its colors to adapt to what was going on around it. Originally a cafe and a hostel, it became a circus venue, then an Opera House, and in 1908 it transformed into the Aguia D’Ooro Cinema, the name that stuck. With the release of Al Jolson’s “All that Jazz” in 1930,  a new milestone was reached when it was one of the first cinemas in Portugal to feature sound. It allowed the voice of Al Jolson, “the World’s Greatest Entertainer” at the time, to echo through the cinema on the newfangled sound equipment. 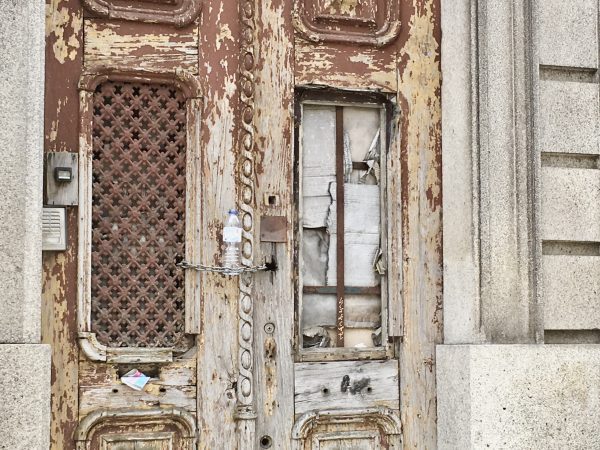 The good times did not last forever. By 1989, the cinema closed its doors due to an economic downturn. As with many buildings in Porto, locks were placed on the doors to keep out the vagrants and this beautiful building, with magnificent interiors and rich history, was left abandoned and forgotten — another building in Porto left to deteriorate, due to the lack of finance that permeated every facet of life in Portugal at the time. 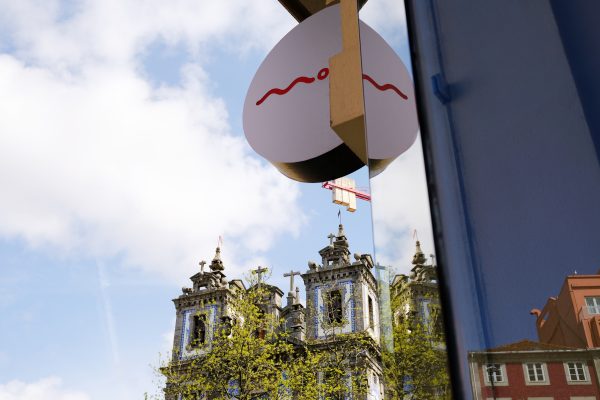 2012 brought a boost to the economy due to an injection of foreign capital. What remained of the theatre was rescued by Endutex, a Portuguese company involved in textile manufacturing, Endutex was pivoting into the hospitality industry, developing a chain of hotels under the brand name MOOV. Thus, the Aguia D’Ouro Cinema went through one more transformation, becoming the MOOV Hotel, Centro.

When the locks were removed from the doors, it was apparent that any hope of salvaging the old cinema intact and creating a hotel from its crumbling walls was out of the question. Most of the interior, with the exception of the balcony level, had to be removed. 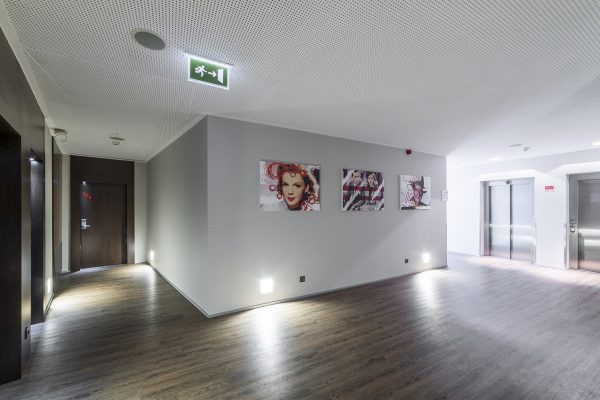 Fronted by the elegant Art Deco facade, a modern, efficient hotel was built with a nod to the movies with images of movie stars from the golden age of cinema decorating the walls. 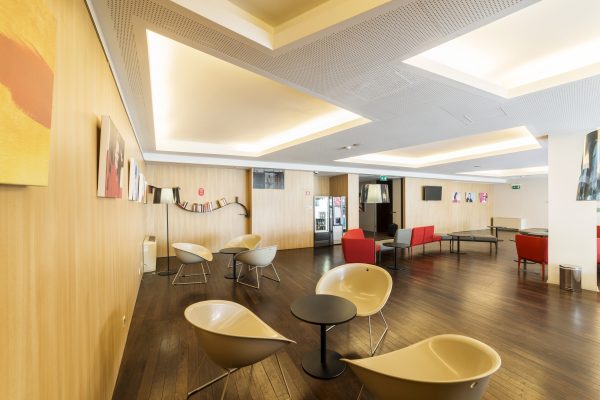 The new MOOV Hotel Centro opened its doors in 2012. Inside is a well-run, two-star modern hotel. offering comfort, style, and good management. The interior is furnished with bright, contemporary furnishings, modern, sleek and minimalistic with antique white walls displaying reproduction vintage images of movie stars,  finished with accents of bright colors that pop against the light-colored walls. 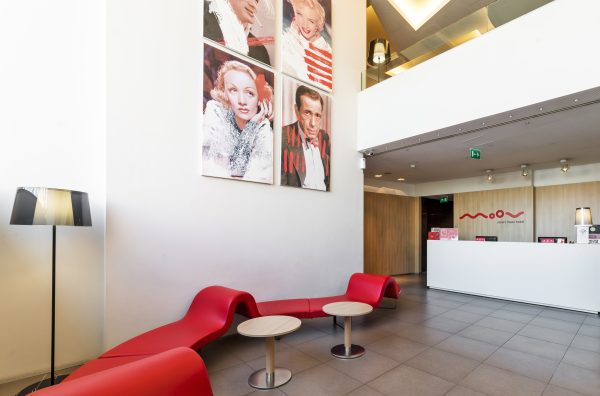 The concierge desk, 12 steps down from the front door is the central focus of the hotel, always busy with arriving and departing guests and offering tour advice and recommendations to its guests. Service is prompt and polite and seems salvaged from another era. This is a two-star hotel with five-star service. The guests are mainly European and the concierges are fluent in English and eight other languages — always with a smile, 24 hours a day.

The crowd is diverse,  comprising all ages. Business people in suits, and tourists of every caliber and nationality. One noticeable element is the “Pilgrims”, many who overnight here, arriving from or leaving to walk the Caminho de Santiago. 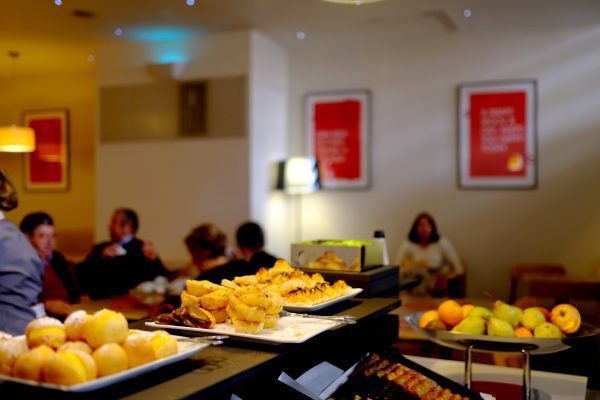 Being a two-star hotel, there is no room service and not too many amenities.  But a self-serve breakfast room, where a generous breakfast is offered, buffet-style, opens early in the morning. Cereals, porridge, a selection of deli meats, eggs,  an array of cheese, different jams,  honey, freshly baked wheat rolls, Danish pastries, and the classic pastei de nata,  a custard pastry favored all over Portugal. There s a toaster to make toast,  limitless coffee, tea, and the most flavorful freshly squeezed orange juice, squeezed by the guests at a juice station. It is a sturdy breakfast and excellent value at 6.5 Euros. 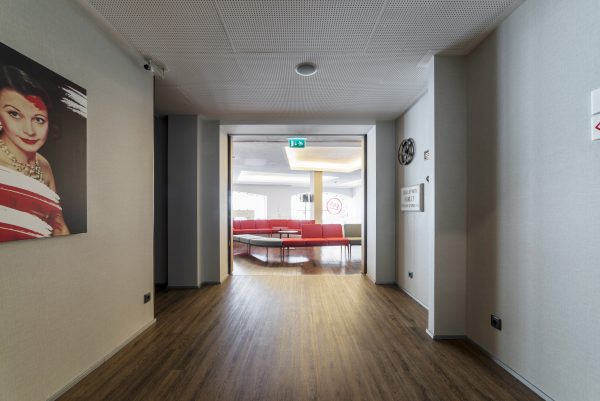 There are 125 bedrooms with different configurations in this Moov hotel, all of them are comfortable. Though on the small side, they are appointed with well-designed furniture that includes a flatscreen TV, free wi-fi, and a writing desk with good lighting. There is a closet and shelves, but leave your ballgown at home because the hanging space is not generous. The beds are firm with comfortable mattresses and the bed linen is delightfully silky and cool, perfect for a good night’s sleep — and it is changed daily, of course. Try and reserve an upper-floor room with a view. Much effort has been put into allowing guests to have a goodnight’s sleep, and to this end there are black-out curtains and excellent soundproofing throughout, so that one never hears guests arriving or leaving — even when there is an early exodus for the Pilgrims joining the Caminho de Santiago.

The bathrooms are well designed and there are more than enough fluffy white towels that are soft and changed daily alongside the linens. You’ll enjoy exceptionally good water pressure and quick water heating, too. There is rain and a hand shower, and the bath products are herbal and sustainable. 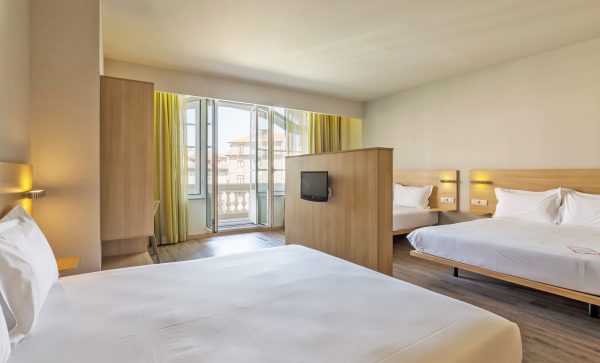 THE STYLE and BRANDING.

Modern, sleek, minimalist, contemporary. The branding is very thorough and features on everything. The word MOOV in the logo is written in flowing cursive, its curves echoed in the red vinyl-covered benches. re-enforcing the branding. White walls, with accents in red and black, also show up on the artwork. 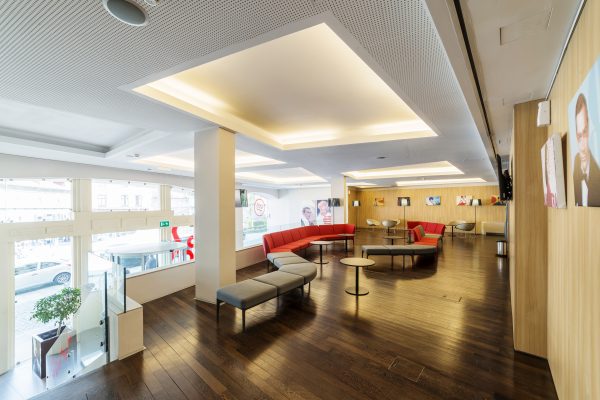 This was the only portion of the original hotel that was saved. Today, the original balcony which overlooked the stage now overlooks the hotel entrance and is ideal for meeting a friend, spending time reading or working as a digital nomad.

Baggage storage, an in-house gym, and a parking garage.

The Moov Hotel has an excellent location in Porto in the heart of the historic center, close to sightseeing, shopping, restaurants, and bars. Here are some suggestions:

The Moov Hotel, with its legendary past as a celebrated theatre, offers comfort and style to visitors looking for a sanctuary in one of Porto’s dynamic neighborhoods. It’s close to several places of interest that are either walkable or can be easily reached by public transport and Uber. If you are looking for accommodation at prices competitive with Airbnb, then the Moov Hotel has it in spades, plus excellent twenty-four-hour concierge service.

COMMITMENT TO THE ENVIRONMENT

MOOV is building ecological hotels and has made a commitment to the environment even in small details like using efficient equipment, sensors, eco showers, and LED lamps that are effective in the management of water, electricity, and waste. This enhances guest comfort while keeping operating costs down and reducing the carbon footprint. If these practices could be implemented worldwide, we would have a healthier planet.

Until the beginning of the pandemic, Porto was in full recovery mode following years of decline caused by poor fiscal policy and lack of leadership. Known for its many Art Nouveau buildings and overall memorable architecture, the city had slid into decline as building after building became abandoned and was left to the mercy of the elements. In 2012 the International Monetary Fund bailed out Portugal’s sagging economy with a large cash injection, and promptly Porto began a program of restoring the historic cobblestone streets and tiled historic center, resuscitating many of the buildings that were terminal, taking them off life support, and restoring them to their original beauty.

Many of my photographs show the cranes obscuring what I was trying to photograph because it was impossible to ignore them due to their size and number. The recovery was on steroids!

With the onset of the pandemic, tourists, whose foreign currency had incentivized the economy, stopped arriving and the city suffered enormously from their absence. But a new feeling of optimism is being felt now that, with easier vaccination restrictions, the tourists are beginning to return. It’s a return which will hopefully re-ignite the economy, filling up the jobs that were lost since early 2020.