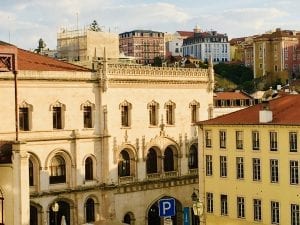 Waking up in the morning in Lisbon, I would open the double doors leading to the balcony and be mesmerized by the panorama that stretched down into the valleys and up into the hills again, above the orange tiled rooftops and out across the city of Lisbon. It was one of the typical older neighborhoods, with buildings dating from after the devastating Great Earthquake of 1775 when most of Lisbon was flattened and then rebuilt.

The Airbnb where I was staying was located almost at the peak of one of the seven hills of Lisbon. You can see it above — it’s the balcony exactly above where the woman is standing in the photo.

There were a few open-air restaurants serving fresh grilled fish lunches and dinners, all shaded with umbrellas; one bookshop; and little shops selling odds and ends.  Happily, it was not near any major hotels or real tourist activities.

If I turned left at the door and walked up the cobblestone steps, I would come to Rossio Station, one of the main stations in Lisbon — and thousands of people would traipse by daily, up and down the steps, on their way to or from the station.

If I turned right, I was a few steps from the landmark old iron staircase, leading down towards Rossio Square with thirty-seven steps and an iron railing on which to hold when the hordes of pedestrians threatened to push me aside.

I mention the steps because they are a landmark — but also because what goes down also goes up, and after a long day, on returning home, I would need to climb the steps going uphill – not my favorite! Add this to the fact that once inside the house, another spiral wooden staircase with seventeen more steps awaited. But most important was what was at their landing…

At the base of the iron steps, there were always a few people standing and drinking outside a “hole in the wall” bar. It was tucked into a tiny space, the size of a closet, with a counter separating the customers from the servers. The shelves were stocked with bottles of ginjinha, also known by its shorter name: ginja.  The space was just large enough for three standing customers to place their orders.

A board outside listed a few drinks they served and there were a couple of tables on the cobblestone sidewalk where guests could stand. In fact, everyone stood because there were no seats at all! You’d often see people standing around drinking little shot glasses of Ginja amid the torrent of people going up and down the stairs.

Ginginha do Carmo was attracting a steady clientele well into the night, with a reputation stretching back to the 1930s.

Ginja originated in the monasteries in the 17th century. I really do wonder what was going on in the monasteries that they were compelled (or eager!) to enter the liquor business!  The liqueur is made from fermented sour morello cherries grown in the nearby village of Aruda do Vienhos, where they are picked in June when ripe, then soaked in Aguardente (“firewater” … or a Portuguese brandy),  infused with spices and lots of sugar, and then left to ferment for about five months. When the fermentation process is completed, the blended liqueur takes on a mellow velvety red color and is 50 proof alcohol.

This particular bar pours a brand called Espinheira Ginjinha, named after the Monk Francisco Espinheira who is said to have created the original recipe. Ginja, served in a shot glass, can be sipped slowly or knocked back in one gulp like schnaps. The flavor is sweet, but not too sweet, and generates a warm glow as it makes its way down into the belly. It is said to cure anything from tonsilitis to the “blues” … although there is no scientific information to confirm this!

There are always fermented cherries at the base of the ginja bottle — you use the traditional wooden stopper to manipulate how many cherries are allowed to escape into each serving — never more than three.

Ginja bars are a part of the cash economy – so know before you pay, they do not accept credit cards.

This is another very typical Lisbon experience at a reasonable price. The chocolate cup costs 1.65 Euros and the shot glass is 1.35 Euros per serving — and to feel the true effect of the ginja, you may want more than one…….

Calcada do Carnero 37-A